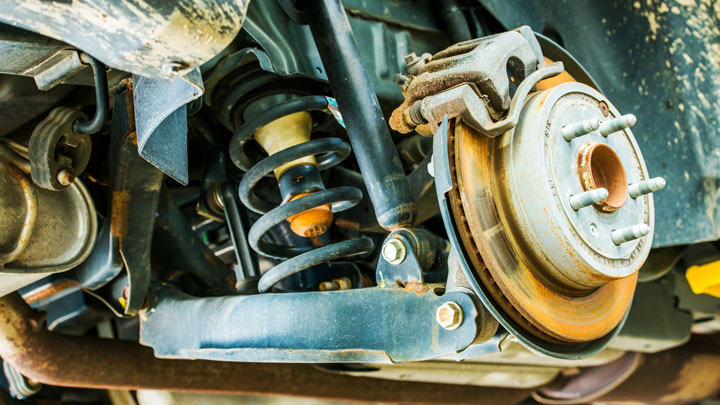 Shocks and struts are an important part of your vehicle’s suspension. While you may never need to replace them, they do wear out over time and can eventually fail.

Expect most shocks or struts to last anywhere from 50,000 to 100,000 miles. So what is the average cost to replace shocks and struts on your car when they go bad?

The Importance of Shocks and Struts

The first thing you need to understand is the importance of the shocks and struts and why exactly you need to replace them. Most modern day vehicles have struts up front and shocks in the rear.

The suspension system of your car has two main functions.

Shocks and struts play a major role in the suspension system of your vehicle, making their wear and tear have a negative impact on not just comfort, but safety.

Damaged shocks and struts affect the way the car tires meet the road resulting in poor performance, dangerous swaying and body roll, poor braking, and unsteady handling and holding of the road.

When replacing struts, you want to do so in pairs even if you think one of them is still good. Otherwise you can have serious handling and suspension issues that can cause unsafe driving conditions and even expensive damage.

The price you’ll pay to replace struts can vary quite a bit depending on brand of struts (usually either KYB, Monroe, Gabriel, or Bilstein), the make and model of your vehicle, and where you have the strut replacement done.

Going to a car dealership for a strut replacement can cost significantly more and you can almost be assured of paying at least $1,000 as a typical front strut replacement cost. For this type of service, it makes sense to shop around and ideally go with a trustworthy independent mechanic to get the best price.

If needing to replace all 4 shocks (or struts), simply multiple the above total costs by two to get an estimate.

Keep in mind that the cost for some vehicles (especially luxury vehicles like Mercedes Benz, Audi, BMW, or Lexus) will be more than average. The same applies to sports cars or other vehicles that use more advanced shock or strut assemblies.

Can I Replace Shocks or Struts Myself?

It depends. Replacement of shocks is pretty straightforward. The hardest part will be dealing with possible rust or seized bolts due to them being exposed to the elements. But you can easily save a couple hundred dollars off a typical shock replacement cost.

Struts come as either individual parts or complete assemblies. If the spring is separate from the strut, a spring compressor is required to compress the spring for removal and installation. If you don’t know what you’re doing, the highly compressed spring could pop loose and cause a traumatic injury.

Struts that come as assemblies are much easier to replace since the spring is part of the assembly. A pair of strut assemblies can be replaced by the average DIY mechanic in under two hours.

But if the spring is separate, it’s best to let the professionals handle the replacement.