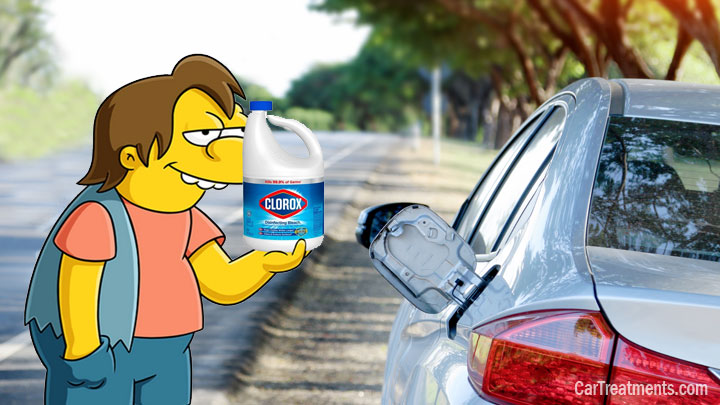 While it’s unlikely that you’ve intentionally poured bleach into your own gas tank, it’s not unheard of for people to try and get back at someone they don’t like by mixing things into their gas tank.

But what do you do if you suspect you’re a victim of someone that has bleached your gas tank? How bad is it? The truth might be more surprising than you think.

Why You Shouldn’t Mix Bleach and Gasoline

While the urban legend is that sugar in your gas tank will destroy your engine, the truth is that bleach will do far more damage. When bleach mixes with fuel inside a gas tank, two main reactions occur.

First, since bleach is mostly water, it settles towards the bottom of the gas tank. This water will lead to significant performance issues as you drive the car.

It starts by becoming a corrosive oxidizer, which can cause all sorts of problems. Additionally, it turns the fuel that it contacted with mostly inert.

When this fuel hits the engine, you’ll have significantly reduced performance. The more bleach added, the more pronounced the effect, especially since there will be tons of water in the engine. The first thing you’ll notice is that your engine will struggle to stay running, or it will run poorly. Exactly what will happen depends on how much bleach someone added to the fuel tank and how full the gas tank was when the bleach was mixed.

The more diluted the mixture, the better off you’ll be. Still, it would take a lot of bleach to stall out an engine, and the more likely response is reduced performance.

Bleach is mostly water and chlorine. Water corrodes, and bleach is a corrosive oxidizer. What that means is that you’ll end up with tons of rust and worn out gaskets and seals.

It’s not something you’ll likely notice right away, but that doesn’t mean that the effects aren’t already taking place.

In fact, when MythBusters ran this experiment on the show, the entire gas tank was filled with rust the very next day. It’s only a matter of time before that rust works its way through the tank and to other components.

While MythBusters proved that the gas tank will rust, this contaminated fuel has contacted a litany of other components if you’ve run the engine. From fuel lines to cylinder heads, the corrosive mixture has touched it all.

If it’s already reached this point, you should replace the rusted components. Failure to do so will result in many problems ranging from clogged fuel filters to dangerous fuel leaks.

How Much Bleach Would It Take to Ruin an Engine?

There’s no definitive answer to how much bleach would ruin an engine. While a few drops wouldn’t do much, if someone added even a quart, you need to flush the system. Otherwise, you could end up with significant damages. If you suspect somebody bleached your gas tank, you need to make sure that you don’t turn on the engine. If the bleached fuel doesn’t leave your gas tank, all you need to do is drop the tank, and completely drain all the fuel and bleach from the tank.

To be safe, you should swap the fuel filter as well, but this shouldn’t be a problem if no one started the engine.

It’s vital that you don’t use water to flush the tank, as water in your gas tank can create its own problems that you’ll need to address.

However, before you haul off the vehicle to a repair shop, you should file a police report. Not only might this help to capture the perpetrator, but it’s also is going to be useful for insurance purposes.

Depending on your coverage, you might only be on the hook for the deductible – which can save you a ton of cash.

2 thoughts on “Bleach in a Gas Tank? (Short and Long Term Effects)”