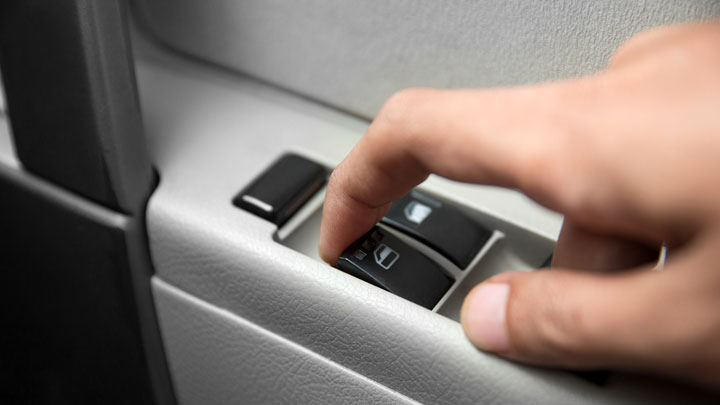 Few situations are quite as aggravating as being forced to contend with a car window that won’t roll up. What would have otherwise been a normal day, is often spoiled, when being forced to worry over the slightest chance of rain, or dread a brutally cold trip home.

If you’re currently experiencing a similar issue, you’re certainly not alone. Window related operational issues are quite a common occurrence, and leave thousands of motorists shaking their heads in aggravation during the course of any given year.

Read on to learn more about the causes of window-related functionality issues, and what course of action to take when your window goes down, but not up again.

Power window systems combine the use of both mechanical and electrical components, in order to facilitate the up and down movement of your vehicle’s windows.

Power window regulators come in two distinct forms. The first of these two forms is the parallelogram (gear-driven) regulator, which scissors when in motion, much like a scissor jack. As a window motor cycles, it turns a series of crank gears, which cause the regulator to scissor. As a result, upward thrust is produced.

More recently, many vehicles have begun to employ the use of a cable-driven regulator system. This system winds a cable through a series of pulleys, which is acted upon by the system’s power window motor.

When in operation, this cable is pulled forward and aft, to raise and lower the window to which it is attached.

The following are several of the most common power window failures, as well as descriptions detailing how to proceed when each presents itself. For a power window assembly to operate, it must be supplied with sufficient power. This power is derived from a vehicle’s battery, and is almost always routed through a fuse or circuit breaker, as well as a relay.

If power is interrupted to this circuit, no amount of switch manipulation will raise or lower a window. A window switch must first receive power, before it can distribute it downstream to the awaiting window motor.

In order to address a window circuit power loss issue, the use of a trusty test light will be required. With the corresponding door panel removed, check to see if power is being supplied to the inlet side of your vehicle’s window switch. If your test light does not illuminate, locate the fuse through which this power supply is directed.

In some cases, all windows will be powered on a singular circuit. However, most vehicles divide this power distribution between several circuits. In many cases, a vehicle’s driver side window and passenger side window will be fused separately from its rear windows.

In many instances, a blown fuse or tripped circuit breaker will be located. This is often the product of aging window motors, which have begun to draw too much amperage when in operation. Another common power window circuit failure is that which pertains to the system’s window switch. With time, internal switch contacts begin to deteriorate, therefore not allowing continuity to be established when the switch is manipulated.

Defective switches account for a significant number of power window system failures. However, replacement is not advised until such a condition can be verified.

When attempting to diagnose a failed window switch, the switch unit will need to be removed from its corresponding door panel. A test light or multimeter will also be required in order to obtain a diagnosis.

First, verify that your window switch is receiving incoming power. Your test light should illuminate when power is detected, if properly grounded. Alternatively, 12+ volts should be noted on the circuit’s supply voltage wire with the use of a multimeter.

If incoming power is detected, repeat this process when checking for outlet switch power, with the switch depressed. If no power is observed leaving the outlet side of your window switch, replacement will be required. However, if outlet power is observed, further testing will be necessary at the point of connection with the system’s window motor. Occasionally, a power window motor will fail, most often as a byproduct of internal circuitry degradation. When this occurs, your window will likely cease to operate in either direction, leaving you in quite the predicament.

Sluggish or noisy window motor operation often serves as a reliable indicator of overall unit health. If a window motor is adequately grounded and supplied with full voltage, yet operates at a snail’s pace, it should be considered suspect.

Luckily, it is relatively simple to diagnose a failed power window motor. To begin this process, remove your door’s interior panel. Next, locate the electrical pigtail which corresponds to the offending window motor. Disconnect the associated plug, and check for the presence of power and ground on the harness side of this connection, while depressing your window switch.

If power and ground are present, your power window motor is faulty and in need of replacement. The difficulty of this job differs from one make and model of vehicle to the next. Much like window motors, regulator units are also prone to failure with age. As time passes, a regulator’s mechanical components begin to fatigue, often leading to irreparable damage. In any event, a faulty window regulator tends to be rather easy to diagnose.

If you have a vehicle window that won’t stay up, seems to be canted to one side, or has fallen into its frame, a failed window regulator is almost certainly to blame.

Diagnosing a faulty window regulator is a matter of visual inspection. By removing your interior door panel, a relatively clear view of this unit is provided.

Thoroughly inspect the regulator’s pivot points, mounts, cables, and window clamps for signs of damage or fatigue. If any irregularity is observed, replacement is advised.

Replacing a window regulator can vary significantly in difficulty, depending upon the particular model of vehicle that is to be repaired. This procedure can range from being simple and straightforward, to extremely tedious. When in doubt, always seek a professional opinion.

How to Get a Power Window Up Manually

Mechanical issues always seem to happen at the worst possible time, and those pertaining to your power window system are no exception. If you find yourself in the midst of a trip, and you cannot return your window to the closed position, use the following procedure to rectify the situation.