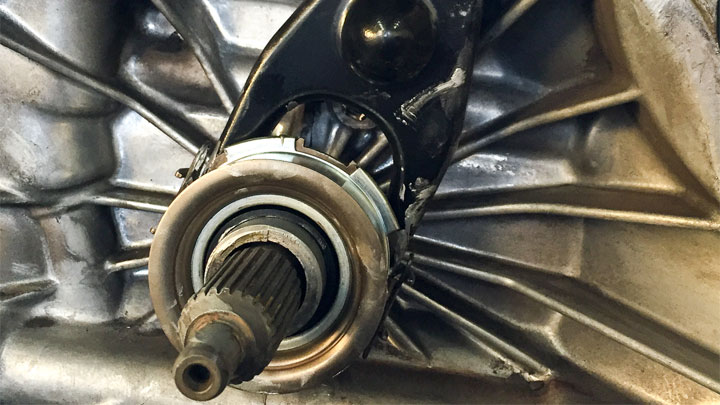 If your vehicle has a manual transmission (a rarity these days), you need to be able to operate a clutch pedal in addition to the brake and gas pedals.

The clutch assembly (consisting of the pressure plate, clutch plate, flywheel, and throw-out bearing), connects the wheels to the engine of the vehicle. The clutch pedal gives you the ability to temporarily disconnect the wheels from the engine which is needed when shifting gears.

The throw-out bearing, sometimes called a “clutch release bearing”, is a simple yet important component that’s only in use when the clutch pedal is depressed. When you have a bad throw-out bearing, it will affect shifting and can lead to failure of other clutch and transmission components.

How a Throw-Out Bearing Works

In short, a throw-out bearing is the component of the clutch which temporarily disengages a car’s engine from the transmission during gear shifts. When you push the clutch pedal with your foot, the clutch release bearing gets closer to the flywheel.

When the clutch pedal is released, the throw-out bearing returns to its original position where power from the vehicle’s engine once again is transferred through the transmission into the drive wheels of a car.

All the components of the clutch and transmission system are important for the safety and functionality of the vehicle. If your throw-out bearing is unable to do its job properly, you’re going to notice some signs of it starting to go bad or complete failure.

The bearing may go bad after years of wear and tear or maybe even from damage due to an accident. In any case, you need to get the clutch release bearing replaced as soon as you notice it’s having problems.

Below are the top 4 symptoms of a bad clutch release bearing. The most common sign of a bad throw-out bearing is when you hear various noises when you depress the clutch pedal. The rollers within the bearing have a tight tolerance and are supposed to be close together.

But if there is too much space between the rollers, then different types of noises will start to be heard. These can include rattling, grinding, squealing, growling, or whirling sounds.

This is simply due to the rollers in the bearing wearing out over time and losing small amounts of material. The noise will sound like it’s coming from the transmission area.

The sound will be most noticeable with the clutch pedal fully depressed and go away when you take your foot off the pedal. When you press down on the clutch pedal, it should move down smoothly. But if you start to feel vibrations coming from the pedal, then it’s very likely that your clutch release bearing is defective or has failed.

More specifically, the vibrations are the result of the throw-out bearing being unable to properly line up with the pressure plate. Your foot will feel pulsations as this happens.

The vibrating pedal is similar to how a brake pedal would feel if the disc brakes or brake pads were unevenly worn. Gear shifts should be smooth without much resistance. If you notice you’re starting to have some difficulty shifting or even grinding gears, it’s possible the throw-out bearing has gone bad.

The problem is that your clutch is not fully engaging. This shouldn’t be the first symptom you experience from this problem, though.

You should hear those strange noises first. If you continue to let that issue go unfixed, then you can expect gear shifting issues or clutch slipping to follow. See Also: What Happens When Your “Ride the Clutch Pedal”

Since it is a simple part, a throw-out bearing itself is relatively inexpensive. The problem is the amount of labor it takes to get to it since the entire transmission needs to be removed.

Because of that, it’s usually recommended to also replace the clutch (and sometimes flywheel) while in there.

All told, the total cost to replace just your throw-out bearing would be $370 to $610. But you will likely want to replace your clutch at the same time so the total replacement cost would be more along the lines of $670 to $1410.