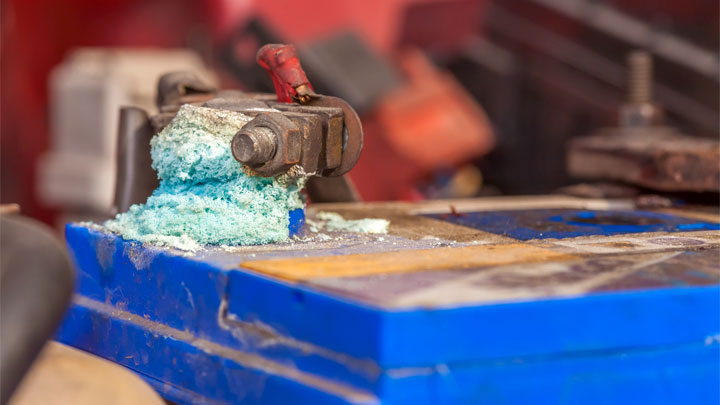 Have you ever raised your vehicle’s hood, and noticed a chalky white, green, or blue substance deposited around the exterior of your battery? If so, what you observed was a case of battery corrosion.

This corrosion is typically found on battery posts, as well as corresponding battery cable terminals. Unfortunately, battery terminal corrosion is extremely common, and has the potential to become a hindrance with time, often leading to a host of vehicle operational issues.

Luckily, this is also a relatively simple issue to remedy. In fact, battery corrosion can be eliminated in a matter of minutes, by anyone with a basic set of tools and a few household products.

Read on to learn more about how battery corrosion affects your vehicle, and what you can do to correct this troublesome condition. There are actually three main types of battery corrosion, and each occurs for a different reason. Though the source of each type of corrosion might differ, all are equally capable of presenting headaches for motorists if not quickly resolved.

The most common type of corrosion is that which occurs through the normal venting of hydrogen gas from within a battery. Hydrogen gas is produced when battery acid heats and cools, and is expelled through vents found in an automotive battery’s casing. In turn, this gas reacts with the lead in a battery’s posts, creating corrosion as a byproduct.

Another common type of corrosion is that which is caused by a reaction between a battery’s copper terminal clamps, and its posts. This typically only occurs when a battery’s posts are exposed to moisture, and is identified through the buildup of corrosion that is green in color.

Battery corrosion can also occur through a process known as sulfation. All automotive batteries contain a chemical substance called sulfuric-acid, which can crystalize with age, especially when a battery is not regularly recharged. This type of corrosion is quite commonly associated with batteries that are nearing the end of their service life, or those found in seldom run vehicles.

How Corrosion Affects Your Vehicle

Virtually all automotive electrical systems are designed to run off of a particular, predetermined voltage. Excess resistance caused by battery terminal corrosion can impede flow, to the point of dropping voltage below a particular circuit’s operational threshold.

As a result, a number of vehicle systems can be affected, especially those related to starting and charging. In fact, one of the most frequently experienced symptoms of battery terminal corrosion is a no crank or slow crank condition.

A vehicle’s battery serves as its singular source of power during cranking. When a battery is unable to relay peak voltage and amperage through its corresponding cables, oftentimes, a car won’t start.

How to Clean Corroded Battery Terminals The following six steps will assist you in cleaning your battery’s posts and terminals, thereby restoring integrity to your vehicle’s electrical systems.

Prepare Your Supplies: Before cleaning can begin, you will need to gather all the necessary supplies. They are as follows:

You will now remove your battery’s cables. Begin by removing the negative cable first, followed by the positive cable. Make sure that each of these cables has enough slack so that their terminals can be cleaned thoroughly.

If either terminal is corroded through, or is otherwise of questionable structural integrity, consider replacement as the most viable option.

Next, prepare to clean each terminal. If using a store-bought product such as CRC battery cleaner, this solution can be sprayed onto each terminal at this time.

If you have opted to prepare your own cleaning solution, mix one tablespoon of baking soda into one cup of water. Stir this mixture until all of the baking soda is completely dissolved, and apply it to your battery cable terminals. Alternatively, some motorists choose to use vinegar in a similar manner.

With your cleaning solution applied, vigorously scrub each terminal using a battery terminal cleaning brush such as the one by Schumacher (good and cheap) until all signs of corrosion have been removed. An old toothbrush with extra effort will also work.

It is also a good idea to reinspect each terminal for damage after all corrosion has been eliminated.

Ensure that no corrosion remains upon completion.

Step 4:  Wipe Away All Residue

Once all corrosion has been cleaned from both of your battery’s posts and terminals, all remaining residue must be removed.

Dampen a rag, and wipe away any residual corrosion or leftover cleaning residue until each terminal displays a shiny, metallic appearance.

You will now coat each battery post with a corrosion inhibitor, to prevent the onset of a similar issue in the future. One can choose between the use of store-bought inhibitor products, or petroleum jelly, each of which tends to be equally effective.

Our favorite corrosion inhibitor is Noco’s NCP2 which is oil-based so it lasts longer than others.

With everything cleaned, inspected, and treated, it is time to reconnect your terminals to their corresponding battery posts. Ensure that each is tightened sufficiently, and that they are not loose to any degree.

How to Prevent Car Battery Corrosion If corrosion has not yet formed on your battery posts or terminals, there are several preventative measures that you can take to prevent the onset of such a condition.

Adhering to the following measures can protect your vehicle’s electrical system, and insulate you from many of the operational concerns that often accompany battery corrosion.

A number of corrosion inhibitors are available on the market today, which can be easily sprayed onto your battery posts and terminals to prevent the build-up of corrosion. These products work because of their ability to seal a battery’s connections from water intrusion.

In the absence of purpose-specific terminal spray, WD40 can also be used in much the same manner.

Products of this nature are used to thoroughly coat the outer exterior of battery-related connections, where they remain for an extended period of time. Many motorists also use petroleum jelly in a similar manner.

Corrosion inhibiting battery post pads can be used singularly, or in conjunction with a chemical derived corrosion inhibitor to keep such build-up from occurring.

These pads are most generally saturated in a corrosion-resistant compound, and are intended to prevent hydrogen gas from escaping between a battery’s casing and posts.

Battery corrosion can also be prevented by keeping a close watch on your vehicle’s charging system. This system uses a belt-driven alternator to provide a steady flow of power to a vehicle’s battery when in operation.

An under or overcharging alternator can lead to a host of corrosion causing conditions, such as sulfation.

In general, most corroded battery terminals can be cleaned to a satisfactory degree. However, in the most extreme of cases, this might not be possible. When this occurs, terminal replacement becomes necessary.

The process of cleaning battery terminals takes only minutes, and can be completed by anyone with a reasonable degree of mechanical aptitude. Whenever a battery’s terminals are still structurally sound, this serves as the most economical solution.

However, corrosion can become severe enough to damage the structural integrity of a battery’s terminals. Terminals can corrode to the point of pitting within the face of their contact surface, or can become difficult to tighten securely in place. When this occurs, replacement becomes necessary.

Can You Clean Car Battery Terminals Without Disconnecting?

In order to thoroughly clean corrosion from your battery’s connections, both terminals should be removed from their corresponding posts. A failure to do so makes it impossible to reach the contact surfaces between the battery’s post and terminals, with any cleaning substances that are to be used.

As a result, cleaning a battery’s terminals without first disconnecting them, does little more than simply remove surface corrosion. This can leave you with many of the same symptoms which you faced before cleaning, since proper terminal to post connection was not restored.

By disconnecting your battery cable’s terminals from their corresponding battery posts, you are able to remove corrosion in its entirety, while also assessing a terminal’s structural integrity. In the process, you are better able to form a sound judgment, regarding whether or not terminal replacement is necessary.

See Also: How Long Does it Take to Charge a Car Battery?