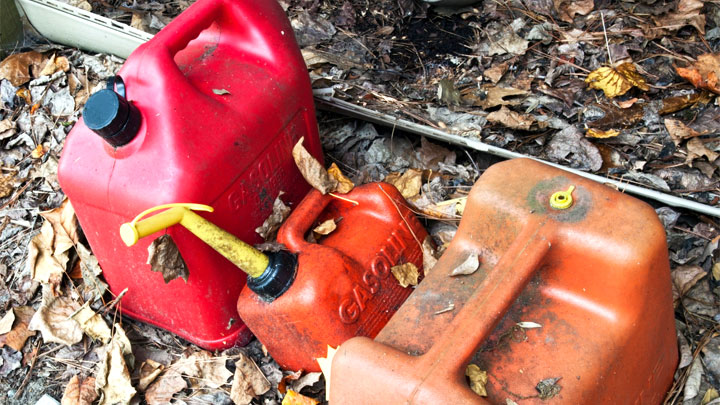 Gas. It’s on everyone’s mind these days, and for good reason. Prices are going up and there’s no end in sight, from what I can tell.*

So, let’s say you have an old beater that’s been collecting dust in your front yard, but it gets slightly better fuel economy than your Toyota Sequoia (ha), so you want to drive it around more.

Problem is, you don’t know how long it’s been since you’ve started it up so you want to get rid of the old gas in the gas tank.

*Note: I’m not a resources economist. There could be an end in sight, or there could not be. In any case, prices are up right now.

What Exactly Is “Old Gas”? 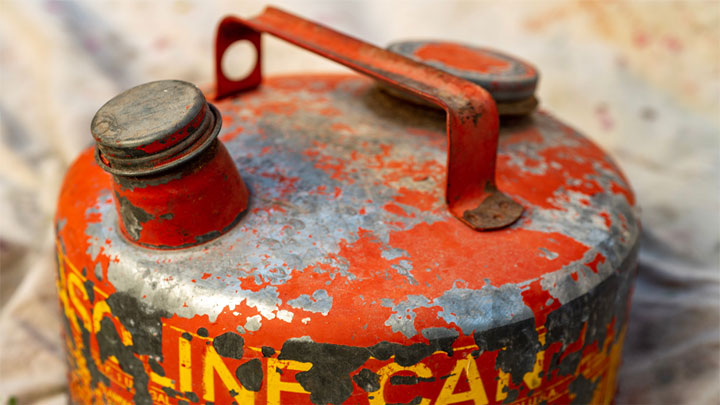 In general, gasoline will start to break down and oxidize, which is the natural process that happens when gas interacts with our atmosphere. This process can take 3-6 months for normal 85 octane gas, and 2-3 months for fuels high in ethanol.

When gas gets old, it will start to smell ‘spoiled’, look a little darker/muddy in color and can cause misfires as well as a higher chance of clogging up your fuel injectors (or even your fuel pump) which will cause more problems for your engine in the future.

Related: How to Clean Fuel Injectors

You may notice a “stale” smell when you go to fill up your gas tank, or you may see through the transparent side of your portable gas can that the gas looks “semi solid”. This means you have some old gas in there and that you should take some action.

We’ll talk about this down further in the article, but you could either syphon out the bad gasoline and replace it with new gas.

Or, if you feel the gas hasn’t been in the tank for too much longer than 6 months, you can fill up the remainder of the tank in a process called “diluting”. This will reduce the concentration of any particulates so it won’t tax your fuel system as much—saving you headaches down the road.

I want to get into the weeds a bit to determine what is REALLY going on with old gasoline, so if you’re not that heady, or just not interested, feel free to read on. You may have the question in your head “If crude oil can last millions of years underground, how come gasoline can spoil so quickly?”

Well, gasoline is a much different product than crude oil that you get from below the surface of the earth. Gasoline is an extremely refined compound, formed essentially by a bunch of Hydrogen and Carbon atoms bonded together, which form hydrocarbons. Throughout the refining process, different contaminants are removed, like sulfur, to prevent environmental conditions like ‘acid rain’.

Furthermore, the gasoline is then refined to the point specified by the EPA so as to not pollute as much as it could be.

Why Does Gasoline Go Bad?

So, why does gasoline go bad if it’s been engineered to such a high standard?

Well, the moment the gas gets in contact with air, the lighter hydrocarbons start to evaporate, which means the delicate balance of the gasoline starts to break down and becomes less volatile. This means, for every combustion cycle, there won’t be as big of a boom.

Another interesting tidbit is that, throughout the year, gasoline companies change the hydrocarbon content of their gas, to match atmospheric conditions.

For example, in the winter there will be gasoline with lighter hydrocarbons that are easier to ignite, but more likely to evaporate. In winter, your gas needs to be easier to ignite so you can always start your car to get to where you’re going.

Conversely, in the summertime, the hydrocarbons are going to be heavier, so they don’t evaporate as quickly, but they don’t need to be light because you’re not dealing with the same temperature differential as in the winter.

Whew! That’s a lot of knowledge, but cool stuff right?

How to Identify Old or Bad Gasoline 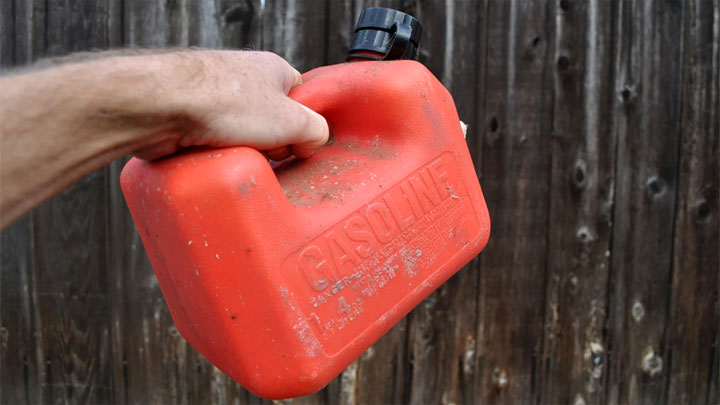 Give it a whiff. How does that smell? If you LOVE the smell of gasoline, seek help because you might end up on an episode of ‘My Strange Addiction’. If not, pay attention to how the smell differs from that of brand new gasoline smell you get at a gas station.

Does the gas in your tank smell stale or ‘spoiled’? If so, but you know the gas hasn’t been sitting for that much more than half a year, go ahead and top off the tank with fresh gasoline to dilute the bad stuff. Most modern motors are built to handle varying qualities of fuel, so you are most likely not going to do much damage if this is the case.

If it’s your classic ‘baby’, and you just don’t want to risk it, get a fuel syphon from your local auto parts store and syphon that gas, baby.

Hint: Don’t suck the hose too much, else you’ll end up with gas in your mouth. Ask me how I know.

Can You Just Dump It Down the Drain?

Don’t do it. One gallon of gas down the drain can contaminate 250,000 gallons of drinking water, not to mention it’s very illegal in most countries so you could get stuck with a hefty fine.

You wouldn’t throw batteries away in the trash, right? Same goes with gasoline. Don’t throw gasoline in the trash at any costs.

This proves to be a fire hazard as you get down the waste disposal line, and could seriously injure someone who is responsible for taking trash and disposing of it correctly.

If you’ve done this in the past, don’t worry, as we are all learning here. Next time, just make sure you dispose of it properly.

How to Properly Dispose of Old Gas 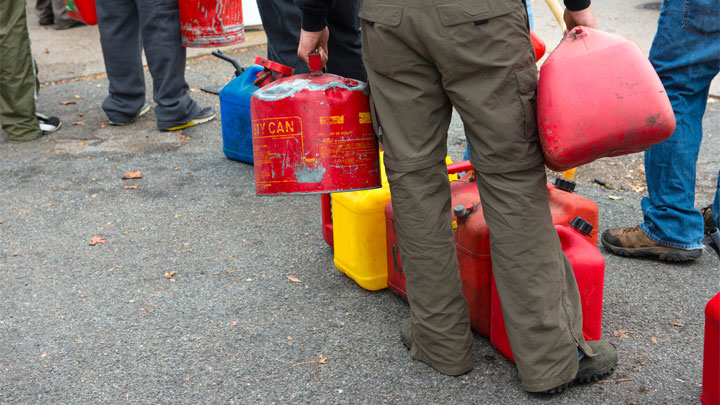 So, you shouldn’t dispose of gasoline using the drain, toilet, or trash can. But how should you dispose of it?

First, try to use it if it’s not too old or contaminated. Dilute it with some fresh gasoline and use it with your weed wacker, lawn mower, or another small motor you don’t care about as much as your primary mode of transportation—your car.

Next, if you just don’t want to have to deal with that, dispose of your gasoline using the resources provided by your local Hazardous Waste Disposal Center. Google “hazardous waste disposal near me” to find a nearby location.

You can also call the fire department’s non-emergency line to get a recommendation on where/how to dispose of your old gasoline.

#5 – Offer It to Landscapers

If you notice a landscaping or lawn care company working nearby, see if they would want it. As already mentioned, old gas diluted with fresh gas usually works perfectly well in lawn mowers and other small engine equipment. They may be happy to take it off your hands.

While not the ideal method due to safety, if you only have a small amount, simply leaving the cap off a container of gasoline will eventually allow it to evaporate. Even better is to pour some gas into a wide, open container in a sunny location. Never attempt this method in a closed space like your garage or shed.

Can You Mix Old Gas With New Gas? 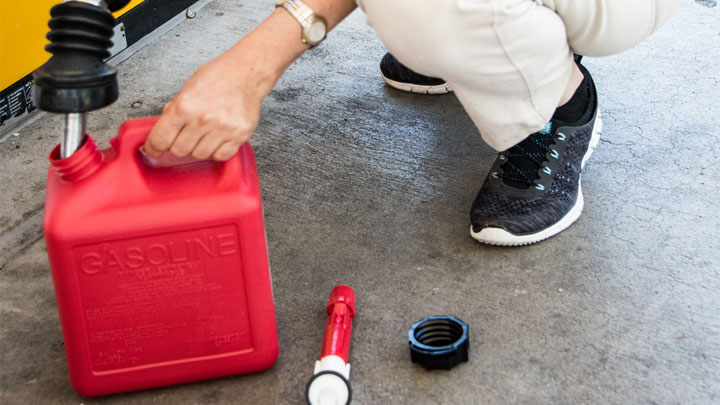 Sure, this is actually a good way to get the most out of your money if you have some old gas laying around and still want to be able to use it. A good way to dilute old gasoline is to pour new gasoline into the same container to dilute whatever contaminants might be in there in the first place.

Keep in mind that modern motors with High Pressure Common Rail (HPCR) systems only allow a certain level of particulates to go through the fuel injectors. So, if you have a newer motor, it’s best to play it safe and just dispose of the gas properly by calling your local hazardous waste center.

If you have an older engine with a lower pressure fuel rail system, by all means go for it. Just make sure you dilute that gas in the first place.

See Also: What Happens If You Put Gasoline in a Diesel Engine?

Can You Prevent Gas From Getting Old?

Yes, in a way, you can slow down the process. First, get your new gasoline in gasoline-specific containers. These allow for enough air flow so as not to turn the gas old, but not enough so all of your gasoline evaporates.

Then mix in some fuel stabilizer (STA-BIL is a good one). This will stabilize the compounds inside your gasoline so it will then last for years to come.

While this isn’t a permanent fix, your gas could last for 2-3 years this way—versus the 3-6 months it will take to go bad just sitting with no airflow and no fuel stabilizer.

Generally, gasoline will evaporate quite quickly if the entirety of the contents is exposed to air and allowed to oxidize. It will leave little to no residue, and is fairly clean—surprisingly enough.

On the other hand, if you leave gas in a container with little to no air exposure, it will polymerize into a foul, brackish semi-solid that won’t evaporate ever.

Auto parts stores such as AutoZone, NAPA, and O’Reilly are fine with taking most old car fluids such as motor oil and antifreeze and disposing them for you but they will not accept old gasoline.

Can Old Gasoline Be Rejuvenated?

Old gasoline can be rejuvenated in a sense, so long as it hasn’t been contaminated with hard particulates or has been sitting for too long. The way to rejuvenate old gas seems to be to dilute it by way of adding new gas to the mixture.

Remember? “The enemy of pollution is dilution”, and the same concept applies to gasoline. Just get some new gas from the gas station and pour it into the gas container you think is old. This should dilute the mixture to acceptable levels so your engine can run efficiently.

Now, if this is your car’s gas tank we’re talking about, bend down and give the gas inlet a whiff. Does it smell “stale” at all? If so, it would be wise to syphon your gasoline and start with a clean slate. It’s not worth the cost of replacing your fuel injectors just to save a couple of dollars at the pump.

2 thoughts on “How to Dispose of Old Gasoline (6 Methods)”