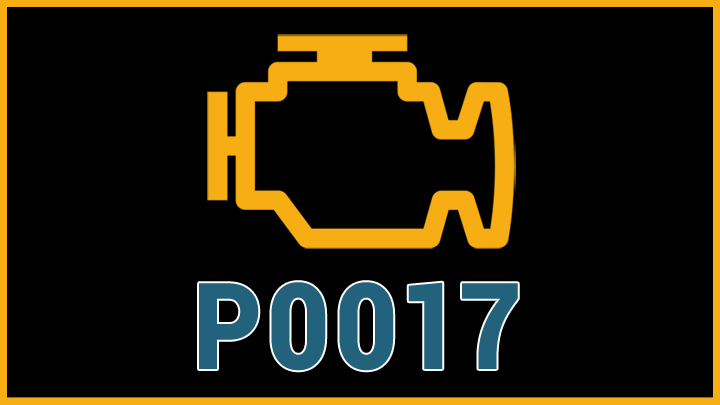 Whether you’re driving down the road or just started up your car, there are few things more disturbing than a check engine light. But check engine lights can mean a variety of things, and some are more serious than others.

But what do you do if you have a P0017 code, and how do you fix it? Just keep reading, and we’ll break down everything you need to know – and how you can make it go away.

If you translate what a code P0017 means, you’ll get the text above. But what does that jumble of words even mean?

While this used to point directly to a misadjusted timing belt, modern engines use variable timing systems that have made the entire system far more complex – and more likely to break.

There are a few different symptoms associated with a code P0017. The symptoms will vary depending on the severity of the problem. However, decreased engine performance and increased fuel consumption are standard.

Furthermore, if the problem is severe enough, you might even hear noises as the engine misfires.

While the severity of the problem might change, even a minor timing issue can lead to severe problems if you don’t address it right away. While older vehicles almost always had a single cause of a code P0017, newer vehicles could pop this code for various reasons. If your vehicle does not have a variable timing system, it’s likely that the engine timing is off or that you have a worn or broken timing chain/belt.

Either way, you’ll need to get to the timing chain, and you might as well replace it after all that work.

But before you start removing any bolts, check your engine oil first. While it’s not the most common cause of a code P0017, if your engine oil is extremely low, it might cause the problem.

Furthermore, if you have used the wrong engine oil, this code might crop up too. However, you will have to use an oil that is completely wrong for your car, not just a slightly different viscosity.

While all of the above problems might be the cause of a code P0017 on a vehicle with variable timing, there are several other issues it could be too. That’s because these systems utilize several additional components to optimize timing.

Both the camshaft variable timing solenoid and the variable valve timing actuator can fail too. If either of these components fails, you’ll often get a P0017 engine code.

There are few codes more severe than a P0017 code. Don’t drive your vehicle – even to the repair shop. A mistimed engine can quickly lead to severe engine damage and even total the engine.

You might think that you’re out of the woods because everything sounds fine when your engine is running, but all it takes is a few minutes for a misadjusted engine to cause hundreds if not thousands of dollars in damage.

The tow truck might seem like an expensive cost now, but it’s far cheaper than a new engine.

See Also: What Happens if Your Timing Chain Breaks While Driving While a code P0017 is a major problem if you’re mechanically inclined, it’s typically not too expensive to fix. If you’re not, you’re probably going to spend a mint on repairs as there is a lot of labor involved.

In fact, replacing your timing belt can cost anywhere from 300 to 500 dollars or more, and that’s if there isn’t any further damage. However, if you can do the repairs yourself, it typically costs closer to 50 dollars for the timing belt, and a few bucks more for the gaskets and fluids you’ll have to replace along the way.

But before you take your vehicle to the shop or start tearing apart the engine, do yourself a favor and check the oil first. If the oil isn’t on the dipstick or seems like it’s far too thick for your vehicle, you might have found your problem.

If you’re not so lucky, determine if you have a variable timing system or not. If you don’t, go ahead and replace the timing belt and readjust your engine timing. If you don’t know how to do this, leave it to the pros.

However, if you have a variable timing system, run a few tests on the actuators and solenoids before replacing the timing belt. Checking for voltage and powering the actuator are great ways to troubleshoot the electrical components in the system. Just be careful not to cause any further damage during the troubleshooting process!

If everything checks out, then it’s probably your timing belt. If not, you’ve found your problem, and it’s far easier to get to than your timing belt – even if the parts are a bit more expensive.