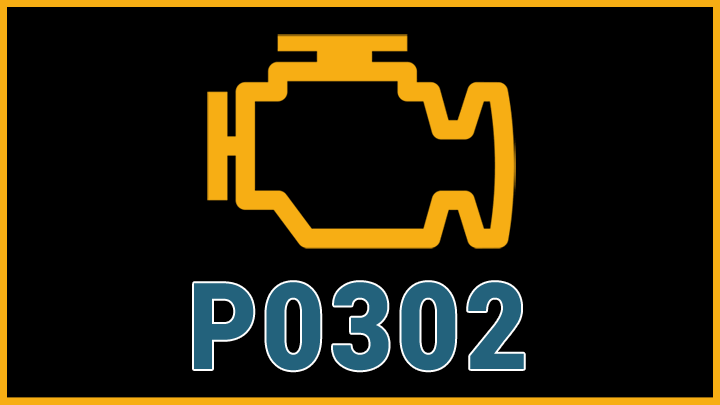 Throughout a lifetime, a motorist is likely to encounter their fair share of automotive issues. However, few such issues are as frustrating as the sudden illumination of a check engine light, when all else regarding your vehicle had otherwise appeared in order.

Read on to learn more about DTC P0302, and how to remedy the root cause of this code, should it present itself.

In essence, the onset of a P0302 diagnostic trouble code indicates that a misfire event has been detected on cylinder #2, as listed numerically.

A misfire could be most easily described as a non-existent or incomplete combustion event, which has taken place on a given cylinder, which in this case corresponds with an engine’s second combustion chamber.

While a lack of sufficient spark is often the root cause of a cylinder misfire, a lack of fuel to the affected cylinder can also be to blame. In rare cases, stifled compression can also lead to repetitive misfires on a specific cylinder, though such a condition is most often associated with high mileage engines.

Not every engine experiences the same symptoms, in connection with the onset of a P0302 DTC. However, a number of driveability related symptoms can become apparent, when a misfire code of this nature is present.

The following are some of the most common symptoms associated with code P0302.

There are a significant number of conditions that can serve as the root cause of a P0302 trouble code. However, virtually all of these conditions center around a lack of spark, fuel, or sufficient compression.

In some cases, electrical or emissions system related failure can also lead to the onset of a P0302 DTC. The following are some of the most common causes of code P0302.

In any event, the root cause of a misfire code should be addressed, diagnosed, and remedied as soon as possible. Because a misfiring engine is experiencing less than optimal combustion on one or more cylinders, engine efficiency will be compromised.

As a result, numerous drivability related issues can arise, even leaving a driver stranded in the most severe of cases.

Perhaps the most significant problem triggered by an unaddressed misfire DTC is possible damage to a vehicle’s catalytic convertor.

Assuming proper fuel delivery to the affected cylinder is maintained, superheating of a catalytic convertor’s core structure can occur as unburnt fuel is sent downstream through a vehicle’s exhaust system. Over time, this typically leads to premature catalytic converter failure.

The following steps can be followed to diagnose and repair P0302 related issues.

The vast majority of P0302 diagnostic trouble codes are caused by ignition system component failures. Because of this, one should begin diagnosing such an issue by carefully inspecting all components of this nature.

Start this process by assessing the engine’s number #2 spark plug, looking for damage or improper gap. Likewise, inspect the spark plug wire which corresponds with cylinder #2 for damage or signs of chafing.

Assuming that no visual defect has been uncovered during your prior visual inspection, an inline spark tester can be used to verify spark on the affected engine’s #2 cylinder.

If no ignition system issues have been uncovered during steps #1 and #2, a professional bi-directional scan tool can be used to check for proper fuel delivery at the affected cylinder.

With the vehicle’s ignition in the “On” position, fuel rail pressures can be monitored, while each of the engine’s injectors is actuated via a scan tool. As each injector is actuated, a momentary drop in fuel pressure should be noted.

If no drop in fuel pressure is observed with the actuation of injector #2, further fuel injector diagnostics should be conducted, to rule out any possible underlying electrical issues.

If you have yet to resolve your engine’s P0302 trouble code, further checks should be conducted to ensure that no additional DTCs are present. If any such codes are noted, each should be diagnosed in a bid to restore cylinder #2 combustion efficiency.

All pertinent live streaming data should also be consulted, to rule out possible sensor-related faults.

If your vehicle’s P0302 fault code remains active, a compression check should be conducted on each of the engine’s cylinders. The resulting compression figures should be compared to uncover any outliers.

Assuming these values are consistent across all cylinders, within 10%-15%, further diagnostics of a vehicle’s PCM (powertrain control module) will be necessary. Consult factory specific service literature from your vehicle’s manufacturer for final diagnosis.