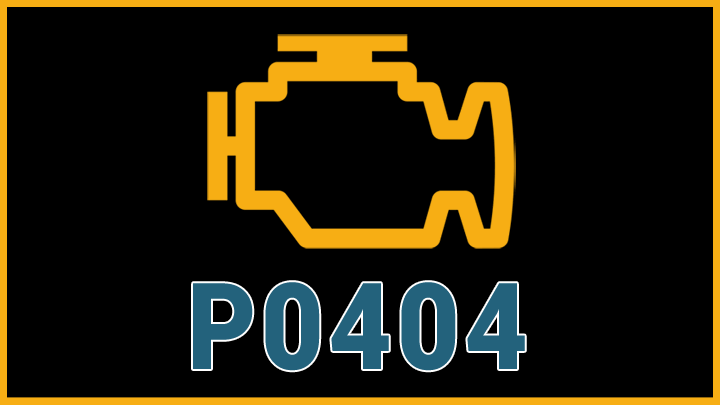 The exhaust gas regulation (EGR) system enables cars to reduce smog emissions. Besides limiting smog emissions, the EGR is also responsible for controlling the engine temperature as well as the ratio of fuel-to-air.

Any component failure in this system can activate the P0404 code.

When troubleshooting the P0404 code, it is crucial to be thorough in your analysis. There are plenty of components that could cause the error besides the EGR valve. The sensor, the wiring, or other electronic components are the most common culprits.

Are you getting a P0404 code from your vehicle? Check out the troubleshooting tips below.

The EGR functions to send exhaust fumes back to the engine. The exhaust fumes help keep the cylinders cool while at the same time limiting smog emissions.

Using the information from the EGR, the power control module (PCM) controls the valve to regulate the exhaust fumes going through the cylinders. The valves will open or close to increase or reduce the exhaust fumes flow depending on how your engine runs.

The PCM tracks the state of the valve using the EGR to know whether the valve is fully open, partially open, or completely closed.

The P0404 code error comes when the EGR doesn’t behave as it should. Most of the time, it’s because the valve doesn’t open. Besides the valve not opening, there are other reasons why this code shows up.

Fixing the P0404 code depends on the type of car and engine you have. The problem appears in electronically controlled EGR valves and not in vacuum valves.

Most of the time, the EGR P0404 code error will not affect how the car drives. The symptoms of a P0404 code depend on the cause. The symptoms will vary when the valve is stuck open, closed, or partially open.

General symptoms of the P0404 code to look out for include: Several things can trigger a P0404 error code. These may include any one or a combination of the following:

The P0404 code is a moderately serious engine warning. Some of the symptoms associated with the code are not easy to spot. You may run your car for a long time without noticing the problem. However, the ramifications on the engine can be devastating if you don’t fix it promptly.

You can have serious emissions problems from your car if the EGR sensor or valve is not working well. You also face potential long-term engine damage if you don’t fix the problem in time.

You can reset the code and try to replicate the problem by going for a test run. If the cause is carbon pieces that block the valve, they tend to dislodge themselves. You can try to clear the carbon from the valve if it’s present.

The EGR sensor is sometimes the culprit behind a P0404 code. The combustion data from the engine should confirm this.

You might also want to physically examine the valve for signs of carbon or the correct valve position. Compare the position of the valve with the one on the scanner. If they match, the valve doesn’t have a problem.

You might also want to check the wiring around your valve. If there are signs of corrosion, it is time to replace them. Next, you should test the voltage of the valve as it moves with a voltmeter. If there are no changes, there is a short that you need to fix.

If you don’t find problems with the EGR valve or connectors and wiring, you should replace your EGR sensor. If this doesn’t work, it is time to call it quits and get in touch with a mechanic. The problem could be an electrical problem with your entire car that only a mechanic can assess and fix.

Don’t replace your EGR valves or sensors before checking the wiring and connectors. Wiring problems are common causes of the P0404 code that are often overlooked.