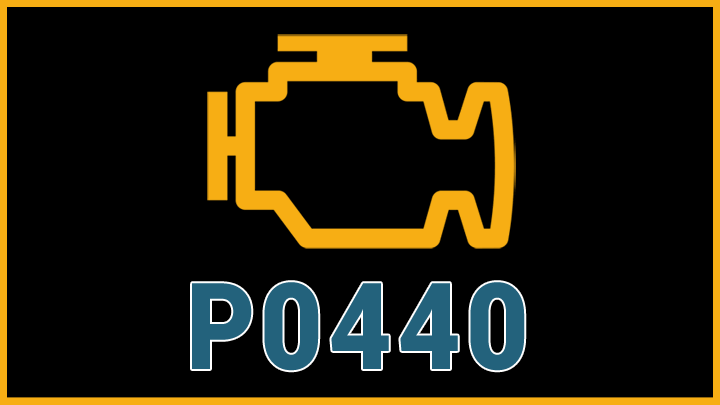 Your vehicle’s internal processes create vapors that release into the atmosphere. The Clean Air Act (CAA) put in place by the Environmental Protection Agency (EPA) regulates the volume of those vapors that a vehicle can emit before passing a designated threshold.

The process of gasoline moving to the engine creates some of those harmful vapors. The evaporative emission control (EVAP) system regulates those vapors within your vehicle by collecting them in a charcoal canister.

The charcoal canister acts as a tightly sealed holding cell for the vapors. When it’s time, the purge valve in the EVAP system sends the gases to the engine where they then burn.

A working EVAP system relies on the tight seal to keep the vapors from leaking into the environment. When there’s an issue with the EVAP system, like a leak, the P0440 engine code pops up.

The P0440 code is general, meaning that the vehicle has an issue with its EVAP system, though the code will not say where. That system has many moving parts that could affect the entire system. The problem could be in the gas cap, carbon canister, one of the fuel lines, the purge valve, or any of the hoses.

The P0440 code comes up because of the vehicle’s testing system. The internal computer checks for leaks in the EVAP system regularly and can sense holes as small as 0.10”.

Usually, the P0440 code comes with another code. The accompanying code gives more insight on where you can find the issue. Common codes that come with P0440 include:

The only other symptom you may notice with a P0440 code is a fuel smell. With leaking fuel vapor, you may smell it when you’re in or around your vehicle. However, you will only notice an odor with a sizeable leak. Otherwise, your car will operate normally, as this issue doesn’t affect your car’s drivability or fuel economy.

This issue goes unnoticed by most drivers. The EVAP system doesn’t usually need repairs, either, as one of the more reliable and stable systems in your vehicle.

A loose or poorly fitted gas cap typically causes a decrease in pressure, and mechanics often see this problem. Less common issues include:

The P0440 code is not an emergency code, as it doesn’t affect your ability to drive the vehicle safely. However, it may cause a dip in your fuel economy.

If you’re nearing the time to take a new emissions test, the P0440 code will cause you to fail. Also, the vapors are flammable and dangerous to breathe. Despite the low volume of gases released, they build up over time.

You don’t want to let this check engine light sit on your dashboard. Any code that turns the light on needs a diagnostic check as soon as possible.

When you take your vehicle in for a diagnostics check, prepare to leave it at least for the day. Since these leaks are tiny, they can be challenging to locate. The first thing you or a technician should try is to tighten the gas cap, then clear the code using an OBD2 scanner.

If that doesn’t work, replacing the gas cap altogether may work. Even if the gas cap wasn’t the cause of the leak, it may benefit the vehicle to replace it at some point. If it’s not a solution, it’s a preventative measure.

The next move is to replace or repair any vapor system parts that have issues. These problems could be anything from the vapor control valve to the carbon canister.

Before the next step, you should have the vapor purge valve and the vent valve checked. Then, using a vapor test port, your mechanic may look for any leaks with a smoke test. The smoke test injects smoke to help identify any leaks.

Finally, check for any damaged or loose hoses under the hood. Realistically, the solution is probably to tighten the gas cap. The P0440 code is a common issue and is usually easy to solve.