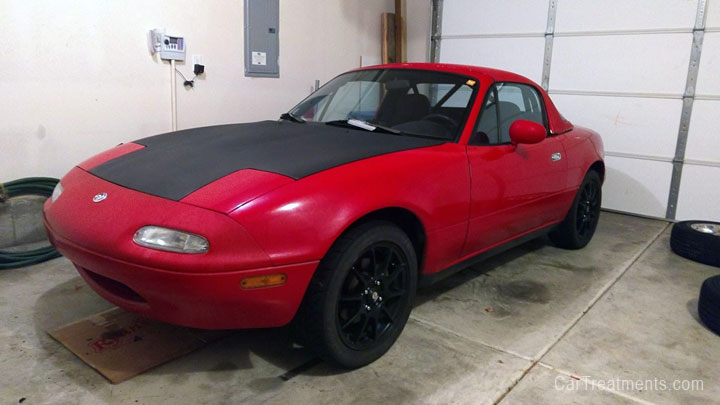 Trying to convince the wife to let you buy a Miata? Does the phrase “built not bought” sound like a pipe dream? Allow me to help. Buying a project car was one of the best financial decisions I’ve ever made.

A few years ago, a friend of mine happened to be selling his 1994 Mazda Miata. At the time I owned a new WRX, yet I was infatuated with the idea of a small, cheap, rear wheel drive two seater.

This example was in fair condition, but far from perfect: the airbag light was flashing, the right door and fender were dented, the soft top was ripped at the back window, the HVAC vent selector didn’t work, and the clutch was on its way out.

By this point in my life, I had changed my own oil and rotated tires, but that was about it. I knew this car had potential, and so long as I did the work myself, it could actually be cheap to own.

So I bought it. Over the past two years, I’ve learned as much from this car as I did in college, met a lot of great people, and acquired some great stories to tell.

9 Ways Your Project Car Will Pay for Itself

#1 – You’ll know your machine inside and out I’ve touched nearly every component in the engine bay, short of rebuilding the engine itself (though one day I plan to do that as well). I’ve replaced every fluid and changed every external seal, and know the mileage behind each serviceable part.

If an issue crops up, I have a head start on where to look, since I was in there not too long ago and remember how it’s put together.

#2 – You’ll learn to be self sufficient

It’s pretty easy to take your car to a dealership, hand them a blank check, and make the problem go away… but you don’t really learn anything by having someone else do the work for you.

Doing the work yourself gives you an unmatched sense of pride and accomplishment, with the confidence to fix any issue that lies in your path.

As a bonus, you may find the things you learn in the garage transfer to other aspects of your life, such as home maintenance or furniture assembly. Hey, I bet you can throw together a mean chest of drawers in no time flat after changing your own clutch!

What is that noise? Why is my idle rough? You’ll learn how to root cause these types of pesky problems by diving into the factory manual to learn how each system works, then following up with some diagnostic tests to determine which parts are operating as intended and which need replacement.

There are few greater feelings than that “AHA!” moment of solving a problem you’ve been after for hours, days, even months. The longer you’ve spent chasing the problem, the greater the high, even if it was just a simple mistake.

These troubleshooting skills may even transfer to other aspects of your life and can be a great career booster; everybody wants to hire the guy who can fix anything.

How does ignition timing relate to idle speed? How does my car run without the mass airflow sensor plugged in?

These are the types of questions you will be able to answer off the top of your head, because you’ve spent time under the hood studying them, fixing them, tuning them, and praying for them to work as intended.

There are a lot of jobs on a car that used to scare the snot out of me. Working on cars can be dangerous, but if you take the necessary precautions and use some common sense, there is really nothing to fear.

When I started to worry about breaking something expensive, I remembered that each time you hire someone, you could do it yourself three times over for the same price.

Learning the fundamentals of how a car works is much cheaper on a $500 project car than it is on a $50,000 sports car. Parts are usually easier to source and there is a plethora of knowledge online since cheap, old cars are usually mass produced and widely known.

Many people hear the words “project car” and think they mean “money pit”. The line between the two is often blurry at best, but I think a lot of it comes down to attitude. If you approach your project with a mindset of “I will get this thing running again!” you are likely safe to proceed.

Sometimes it takes a bit more money than expected to resolve a problem, but you come away from the experience with knowledge and wisdom that is hard to put a price on and will help you out on your next adventure in ways you couldn’t have foreseen. When you do eventually save up for that dream car, you’ll know your way around an engine bay. Car enthusiasts love to help each other out. When someone posts a thoughtful question on a forum, many people offer advice, and some even offer to help you do the job in exchange for a six pack of beer.

These are people who love cars and will celebrate your personal victories with you. They’ll make sure you’re ready for the next autocross or car meet.

Working on cars is just that: work. It can be a whole lot of fun, but I’d be lying if I said it was always easy when I stepped into the garage (in fact, most times it’s not easy at all).

Sometimes there’s no clearance to reach a bolt, sometimes it takes a lot of muscle to get an old part out, and sometimes it feels like the engineers who built the car never expected the car to be taken apart.

Doing the same job over again because you made a mistake teaches you patience, persistence, and perhaps even humility. I value these traits, but acquiring them is rarely fun.

#9 – They make for great stories

If everything went smoothly, life would be boring, right? Sometimes jobs don’t go as planned.

I had to redo my timing belt four times because the intake cam gear slipped off the pin. The timing marks were perfectly aligned but the intake was overly advanced, causing a very rough idle. After I replaced half the parts in the engine bay, I realized my mistake.