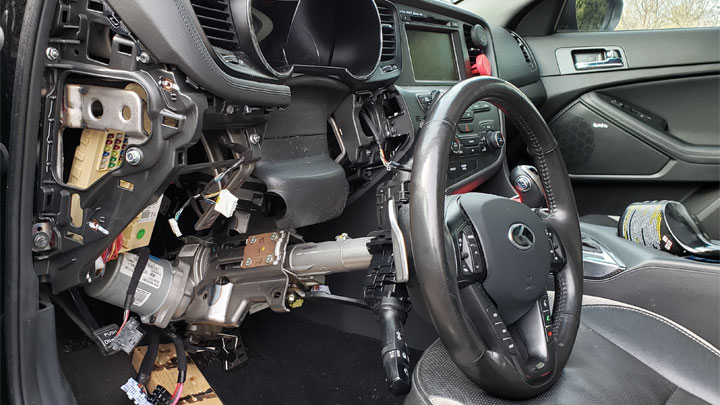 All vehicles have a component called a steering column. Its main purpose is to connect the steering wheel to the car’s chassis which contains various steering components that allow the front tires to turn left or right.

Also running through the steering column is wiring for various buttons, dials, and levers including turn signals, cruise control, windshield wipers, radio controls, and the ignition switch which are all mounted to either the steering wheel or column itself.

Some cars may also have the gear selector mounted on the side or even manual paddle shifters. All these controls are connected to the vehicle’s ECU (or ECM).

The steering column was gradually improved during the 1950s, which was considered to be the golden age of automobile designs in the United States. By the end of the decade, the steering column became a critical component of most vehicles.

It became more than just something for steering the car. The steering column would now allow drivers to get in and get out of their car by swinging out of the way on some models.

Other options such as adjustable tilt and telescopic features were later introduced which allowed a more comfortable driving position for different drivers.

Not sure where to order parts?  See: 19 Best Online Auto Parts Stores

WHERE you take your car (independent repair shop, dealership, etc.) along with the make and model of your vehicle will be the deciding factors in how much the replacement of your steering column is going to cost.

On average, you can expect to pay anywhere between $500 and $1,500 for the full replacement job at most auto repair shops. Expect at least double that if having a dealership do the job.

While it’s possible to replace a steering column yourself, it’s considered a more advanced task so good mechanical experience is recommended.

In that case, you can purchase a used steering column for under $100 in many cases on eBay or an online social media marketplace (or $200 to $500 for a new unit) and spend some time on the replacement. The newer the vehicle and the more features and technology it has, the more difficult the replacement process would be.

For the majority of car owners, hiring a professional mechanic to replace your steering column is a must. Don’t think that just because you change your own oil or spark plugs that you’re qualified to change out a steering column.

For a job such as this, it’s a good idea to get at least 2 or 3 quotes from local mechanics. You’ll find their estimates can vary by hundreds of dollars. That said, this is a job for a good mechanic, not the cheapest mechanic since the component directly affects the safety of the driver and passengers.