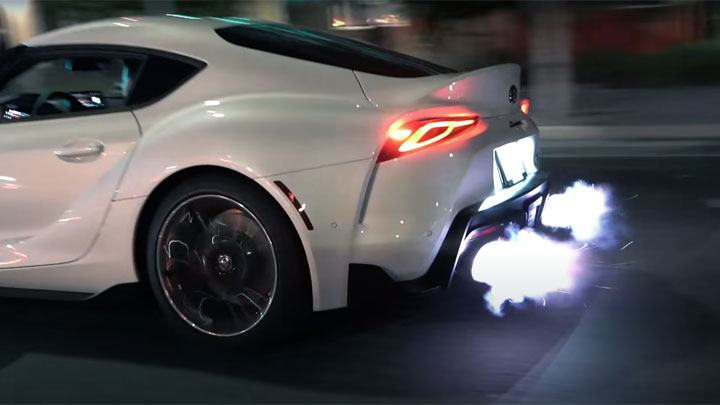 Straight piping your exhaust is a religion. It was brought forth by the Israelites on the seventh coming of the Lord’s name, wherein they exclaimed: “Thou shalt eliminate all resistance from thine exhaust system, so as to spit fire and therefore create more burning bushes, bro.”

Shortly thereafter, as we all know, horse-drawn carriages were rationed laxatives by the Philistines, readily clearing out those pesky organic exhaust pipes. This produced much in the way of methane gas, and other pollutants, but caused those horses to move forward at a record pace.

A couple of thousand years went by, and Henry Ford dropped the Model T on the American people, so naturally, people started messing with the exhaust. This seems like it was more due to the novelty of the sound you could make with that exhaust than any sort of pursuit of performance gains.

“They used to have a great big nut you screwed on the manifold that had a big pipe on it. Me and my brother used to like to hear that exhaust better. We’d take that nut loose when we got away from the house!”

— Couple of kids fooling around with their dad’s model T, 1920

What is a Straight Pipe Exhaust?

It bypasses the catalytic converter, the emissions controls, and sends a ton of sound toward those pesky tailgaiters. Sometimes, you can even shoot flames out the back if you are running rich enough.

That’s the point of the straight pipe exhaust: it’s super fun and cool to hear your engine better! A straight pipe can increase horsepower and top-end speed, and even more so if you have turbocharged your vehicle. This is because you remove all resistance from the exhaust system, which allows your engine to run smoother.

But on a street vehicle, you may actually see a decrease in HP and torque below 2500 RPM. That’s only due to your street vehicle being designed around having some back pressure in the system, and being tuned to that specification.

A straight pipe can also let other motorists know you’re coming when you pull up behind them, or when you’re both stopped at a stoplight.

Related: How to Make Your Car Backfire One disadvantage of a straight pipe setup could be that your car may make less horsepower at lower RPMs as you remove some back pressure when straight piping your ride.

Another could be that you won’t be able to pass emissions and register your car with an exhaust system that expels much more CO2 than when it came from the factory.

Another downside is the smell. When you straight pipe your exhaust system, you’ll shoot unburned fuel and gasses out the back of your car, and those fumes will be what you smell in the cockpit.

It’s worth mentioning that everyone behind you can smell those fumes if they have their windows open, which kind of sucks. So, if you care about that sort of thing, I wouldn’t straight pipe your car. Instead, try a cat-back system.

In my experience, the sound was the worst part of straight piping. Yeah, you’ll get a new, unique sound you haven’t heard from your car before, but it gets annoying really fast if you have to drive that car to and from work every day.

When shopping for these exhaust kits, make sure you buy once, cry once. Get a system that’s made better with an actual acoustic engineer so you don’t get a “drony” system that will drive you crazy.

Straight piping your exhaust is illegal from most accounts I can find, but that legality varies state to state

“Every motor vehicle shall at all times be equipped with a muffler in good working order which blends the exhaust noise into the overall vehicle noise and is in constant operation to prevent excessive or unusual noise, and no person shall use a muffler cutout, bypass, or similar device upon a motor vehicle on a street or highway.”

Many states have laws along these lines, and you should probably pay close attention to them. However, most people don’t get stopped unless their car is insanely loud and bothers the neighborhood.

Sidenote:  NOBODY likes the guy that cold starts his straight pipe Jeep Grand Cherokee Trackhawk at 6am before going to work. Nobody.

Is Straight Piping Bad for Your Car?

This also varies case by case as for some engines, removing resistance can cause the motor to run rich and out of tune.

You’d want to get a tune done if you change something like your exhaust system anyway to ensure you are burning the proper amount of fuel. Then, you may even see your miles per gallon go up!

How Much Does a Straight Pipe Exhaust Cost?

Like most other mods, this depends on how much you want to spend.

Anybody can just go to the muffler shop, throw the mechanic a hundred bucks and they can build you a straight pipe exhaust from left over parts.

The thing is, it won’t sound very good at all and you’ll probably get a really “Raspy” sound quality when at full throttle. That “rasp” is the ear splitting, super high pitched exhaust sound that you normally hear from Honda CRXs at car meets. Not my favorite, but to each their own.

If you want to go with a professionally engineered and manufactured straight pipe exhaust kit, or just a race pipe, (deleting your catalytic converter and replacing just that section) you would most likely spend $300-$450 for parts alone, then another $200+/- in labor putting the exhaust in.

If you want the least drone, least resistance, top dollar straight pipe kit, go with HKS. They are legends in the business but it’ll cost you around $500-$650 for just the parts.

Along these lines, I would also factor in another $350 for when you eventually have to put your catalytic converter in because the straight pipe is too annoying. Trust me, I’ve been there. (check out our article on the Check Engine Light)

Now, the question most modders will ask themselves in their journey: “Should I go straight pipe or cat-back?”

Cat-back exhausts is everything in your exhaust system from the catalyic converter back to the rear of the car. Hence the name “Cat-back”. It is usually cheaper than a full exhaust system and it doesn’t bypass the oxygen sensor on most cars as they will usually be mounted on the catalytic converter.

Since you aren’t bypassing anything important, your exhaust won’t be emitting harmful gasses into the atmosphere nearly as much, and you won’t have the headache at the emissions testing center where they make you go pay to have your car fixed.

Furthermore, while this is entirely subjective, the sound of a cat-back exhaust when done right, is more subtle, quieter, and therefore easier to live with. You won’t annoy the neighborhood when you start up the car, and you’ll be able to hear your girlfriend talk in the passenger seat when cruising on the highway.

On the other hand, if you just wanna go “full racecar”, straight pipe that beast and shoot some FLAMES.

See Also: Is a Cold Air Intake Worth the Money?