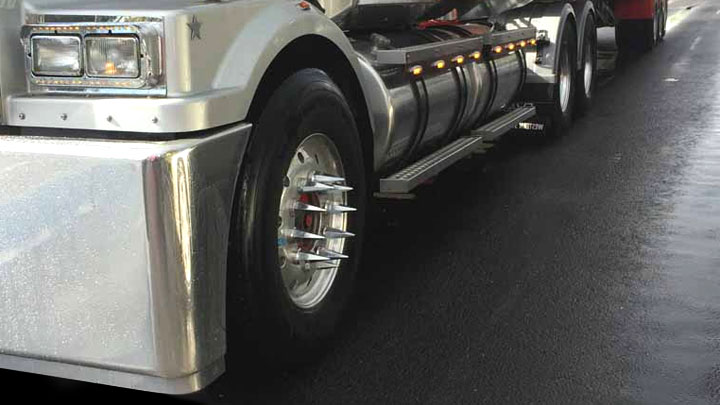 Do you remember the opening chariot race in Ben Hur? There is a moment in the race where the camera zooms in on the wheel and you can see a bunch of daggers poking out from the centerpoint of the wheel as it gets towards our main character’s chariot.

This is meant to be a weapon of sorts, and they were meant to chop off the ankles of foot soldiers during the reign of the Roman Empire.

Or, you might have seen them in the Mad Max movies with Mel Gibson braving it through the Australian desert in his old XB Ford Falcon. Those wheel spikes worked for him, but will they work for you? (Don’t try that at home, please)

Now, you might be wondering “what does this have to do with driving down the road and truck wheel spikes?“ Well, you might’ve even seen semi trucks or large diesel trucks that have a bunch of spikes poking out from where their lug nuts should be. These are called “wheel spikes.”

What is the Purpose of Wheel Spikes? 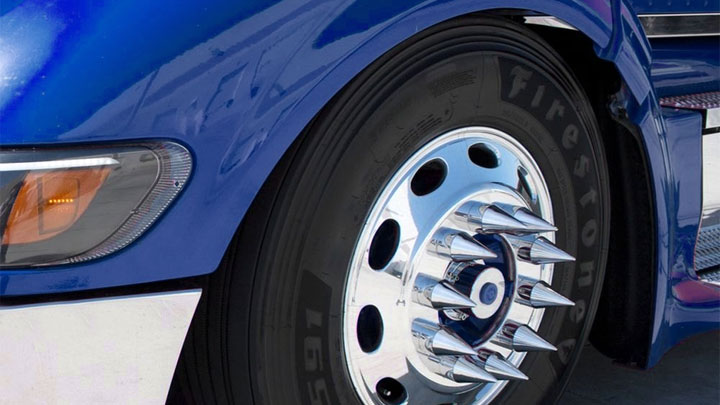 Officially, the purpose of wheel spikes is to prevent the lug nuts from corroding, rusting, or getting dirty. They also have the added benefit of keeping other drivers away because the other drivers think that the truck spikes are very dangerous, just like in the movies.

Therefore, they are more likely to give the truck driver a wide berth. Before we go any further, if you’re looking for normal lug nuts, check out this article.

It seems as though these spikes could have evolved from extended lug nuts that have been used on many cars throughout the years. This would have been to allow impact drivers and other power tools to easily seat on the lug nut for fast wheel changes during a race.

Eventually, truck drivers adopted and changed their appearance since they didn’t need them for fast wheel changes.

Another prevailing theory comes from the Goth/Punk scene in the early 1990s. People just wanted spikes on everything: their dog collars, shoulders, elbows, heads, knees, feet, and, you guessed it, their lug nuts. Hell yeah brother. 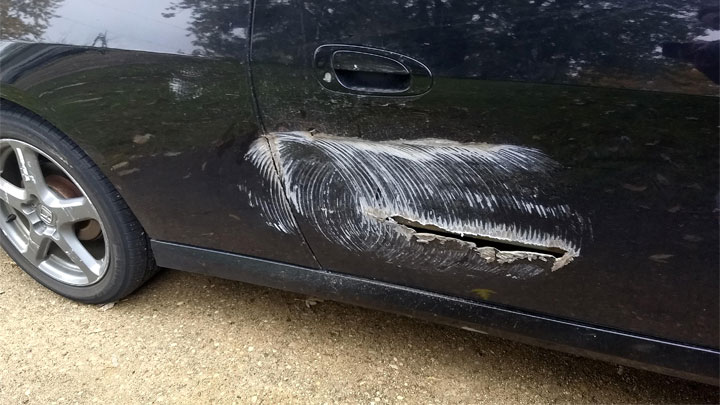 It’s not as if you are in a Mad Max movie and you can just mow down the badlands psychos trying to chase you in your Ford Falcon (I love this movie). These knives that they have on their vehicles in Mad Max are more than likely going to be salvaged blades welded onto the actual steel rim of the vehicle.

I don’t think it would even be wise to have spikes on the lug nuts for this purpose anyway! If you’re in the middle of nowhere fighting people for oil and resources, you wouldn’t want it to be any harder than it needs to be to change a flat tire.

All this might come as surprising to most people, but let me explain. A lot of the time, wheel spikes are made out of soft alloys or plastic because if a trucker accidentally smacked his wheel spike on a curb, he’s not gonna want to shear his lug nuts off and have to replace his lug bolts.

He’ll want the lug nut spikes to be soft so that’s the first thing to break off when he/she accidentally cuts that corner a little too close.

This being said, PLEASE don’t test this out. If you can use your common sense, you won’t have your buddy drive at 30mph and place your shin in the way of his wheel spikes. Your leg will be messed up.

See Also: How Long Can a Spare Tire Be Driven On?

Are There Different Kinds of Wheel Spikes? 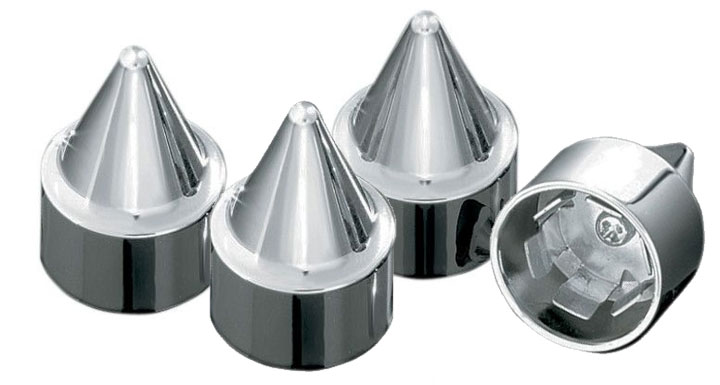 Just like there are many different types of lug nuts, there exist different kinds of wheel spikes. Some are very long and pointy, others are blue and green, others are shiny, some have a matte finish, but all of them are meant to express yourself in the best way you can!

You have blue bullet-shaped wheel spikes, ones that are shaped like castles, others are shaped like drill bits, and some are just gold rods. Also, since they are so close to the center of your wheel, you never have to worry about balancing your wheels. (Usually. I’m always proven wrong by one person.)

Do Only Semi Trucks Have Spiked Wheels? 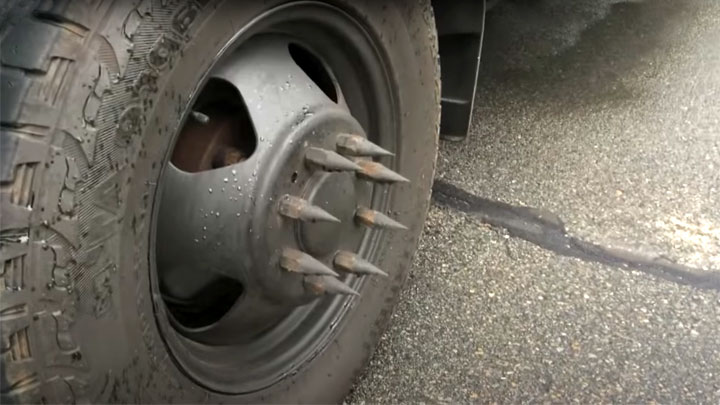 No. Any vehicle with lug nuts can have spikes on it. They are simply meant to be lug nut covers to show off how cool your vehicle looks or to warn other drivers subconsciously to stay away.

They also remind those other drivers to pay attention to where they’re traveling instead of looking at their phones, putting on makeup, taking their meds, or blow drying their hair.

You might also see spiked hubcaps on trucks here and there, but these aren’t any more or less dangerous if I’m being honest. They are simply hubcaps with spikes stuck onto them. 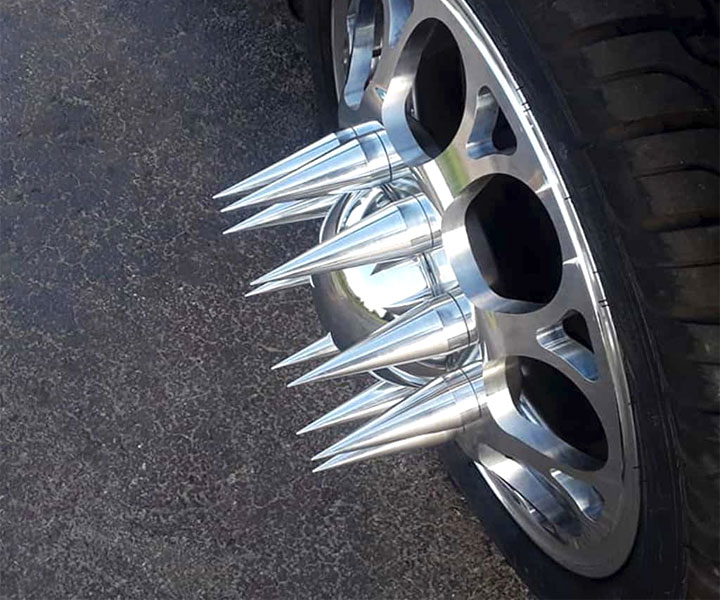 Wheel spikes are not illegal. Most wheel spikes are no more than four or 5 inches long and they don’t extend any further than your fender, your rock slider, running guard, or your bumper. Wheel spikes are normally, as explained above, made out of weak material that would most likely just break off in an accident.

However, the law states that if you have anything sticking out of your vehicle that is likely to hurt someone as they’re walking by, it’s illegal.

So, go out and get some wheel spikes. It’ll make your car look cooler,  it’ll warn other drivers to stay away because you could easily “Ben Hur” them, and they’re cheap.

3 thoughts on “Why Do Some Trucks Have Spikes on Their Wheels?”