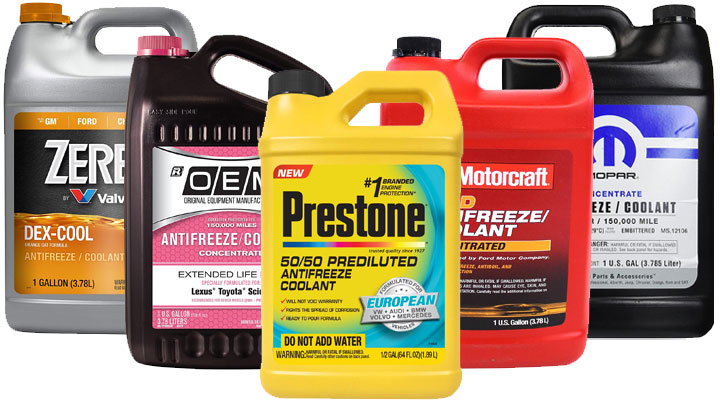 The gasoline or diesel engine in your car or truck produces the necessary power to push you down the road. At the same time, that engine produces a considerable amount of waste energy in the form of heat. And that heat must be extracted from the mechanisms inside the engine and efficiently dumped to the outside air.

How does this happen? Well, unless you’re driving either an old VW Bug, a Chevy Corvair, or a Porsche, your car will have a “water” cooled engine. Your car will also have an engine with internal water passages, a water pump, a heat exchanger called a radiator, and a bunch of flexible hoses connecting these things together.

How does all this work? When the engine is running the water pump circulates the cooling water through the engine and out to the radiator. The hoses convey this fluid.

Every time you drive, the water picks up heat from the engine and releases that heat into the air flowing through the radiator. This prevents your engine from overheating.

What is Engine Coolant?

In the description above, “water” is the term used for the cooling fluid. But the cooling fluid will not be just water but a blend of water and antifreeze. The technical term for this blend is coolant.

Simply put, coolant is the liquid that functions to cool the engine in your car. To fully understand the automotive coolants of today, we must first look at the qualities of the pure water once used for this purpose.

For cooling engines, water has some very positive qualities.

There is no question that these three factors made water the coolant of choice in the early 1900’s when engine-driven vehicles came on the scene. But there are several problems with using water alone that made it then and even now less than the ultimate engine coolant.

Related: Can You Add Water to Your Radiator in an Emergency?

Very early in the development of engines, chemists began to modify water with added chemicals to make it a more suitable coolant. These additives focused both on overcoming water’s disadvantages discussed above while still retaining the positives that water brings to keeping things cool. 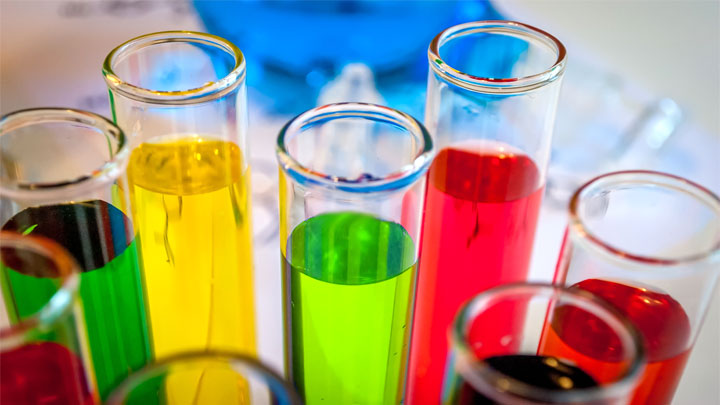 Early in the history of keeping engines cool, the biggest problem was coolant freezing. And chemists soon found that methyl alcohol (methanol) could be mixed with water and thus lower its freezing temperature. Methanol was the first coolant additive called antifreeze.

Unfortunately, this antifreeze also lowered the boiling temperature of water introducing a new and major issue. Fresh water boils at 212° F. Engines achieve operating temperatures at or above the 212° range and can easily boil water. The lowered boiling point using methanol for antifreeze could not be tolerated.

The next step forward was a chemical called glycerol. It lowered the freezing temperature of water but was effective down to only -36° F. Not quite low enough for every winter climate condition. An even better product was needed.

Also, pure ethylene glycol is sweet to the taste as well as being toxic. A spill of your car’s coolant with this particular antifreeze blend onto your driveway could leave a poisonous puddle. Your next door neighbor’s puppy might be attracted to the taste lapping it up, leading to sad consequences. Always clean up coolant spills to avoid this kind of disaster.

Propylene glycol, a second and more recent option for antifreeze, also works well for automotive coolant purposes. And in moderate amounts it is non toxic. However, when used in coolant blends, it is prone to develop bacterial and fungal growth over time. Special additives minimize this risk..

In 2012, US antifreeze manufacturers agreed to add a bitter tasting chemical to their antifreeze products in an attempt to mitigate the toxicity issue. This has not proven to be completely successful.

For this reason the use of propylene glycol has broadened. The chemical, glycerol, discontinued from automotive antifreeze use in 1926, has recently received new consideration as a possible non toxic replacement for ethylene glycol.

The characteristic antifreeze smell you may have noticed occasionally under the hood comes from a common corrosion inhibitor, tolyltriazole. A side benefit with this additive is that antifreeze leaks are often easily detectable with a sensitive nose.

Does It Matter What Coolant I Use?

Yes, it absolutely does. Your owner’s manual for your car or truck will give you specific guidance in this regard. Disregarding this direction could conceivably cost you a bundle to fix just a few miles down the road. 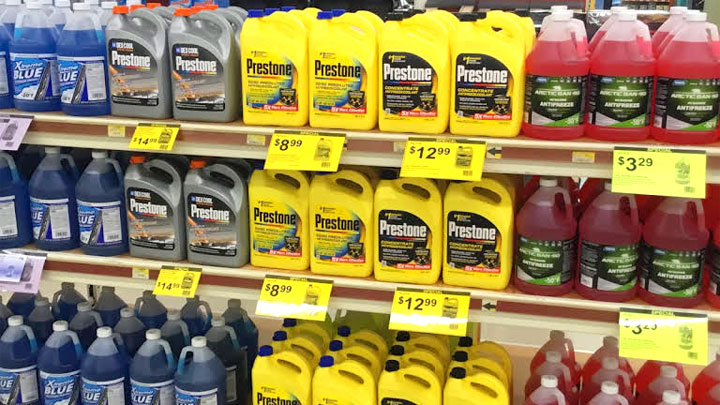 Additionally you will have to choose from full strength antifreeze or a 50-50 mix of antifreeze and water.

Full strength antifreeze will require you to blend it with distilled water prior to installing it in your car’s cooling system. A 50-50 blend will work for most winter climates protecting against freezing down to -35° F. For extreme cold, a 60-40 blend of antifreeze to water can be used to provide lower temperature freeze protection.

Important
Never blend antifreeze with tap water. Dissolved chemicals and/or chlorine in drinking water can result in serious cooling system problems. Distilled or reverse osmosis purified water must be used when you make up your coolant mix.

Also never refill an empty cooling system with 100% antifreeze, i.e., antifreeze with no added water. In this situation, the undiluted antifreeze will freeze at about 10° F instead of the -35° F achieved with a 50-50 mix.

Let’s review antifreeze colors and types. Coolants are colored to help identify the coolant in an engine. This can help us avoid adding the wrong coolant. Also the loss of its brilliant color can tell us a coolant is at the end of its service life.

This is the oldest coolant blend and was installed by all domestic car manufacturers through about 1994 with some makes such as Ford continuing through 2002.

Asian and European car builders discontinued using this blend in 1990. It contains phosphates and silicates and works reasonably well with cast iron engine blocks and copper or aluminum radiators.

IAT coolants must be flushed out and renewed every 2 years or 36,000 miles. If left in an engine beyond these limits, the inevitable formation of clogging solids could degrade a cooling system’s performance. Heater core blockages were not uncommon with this coolant years back if it was not regularly replaced.

This type of coolant contains no phosphates or silicates and is found in most domestic cars built after 1994. Extended coolant life of up to 5 years or 150,000 miles is a benefit with these coolants.

These coolant blends fall between the IAT and OAT types and are called Hybrid Organic Acid Technology (HOAT) products. HOATs are commonly installed in newer Chrysler products as well as in European and Asian cars.

In other respects, Dex-Cool is an acceptable coolant but must never be mixed with other antifreeze types.

For your late model car, domestic or foreign, going to the dealer parts counter for antifreeze may be your best bet. By doing so you will not have to interpret the antifreeze specifications and/or usage constraints on those gallon jug labels at the parts store.

While you may pay a bit more, you’ll also have confidence you are using a coolant formula specifically blended for your car.

What Type of Coolant Does MY Car Need?

Your car came from the manufacturer with the type of coolant it requires. For its lifetime, this same coolant type should be used. The type will be specified in your owner’s manual.

Skilled auto parts specialists can also provide this information for you should you need to purchase antifreeze.

Can I Mix Different Coolants? 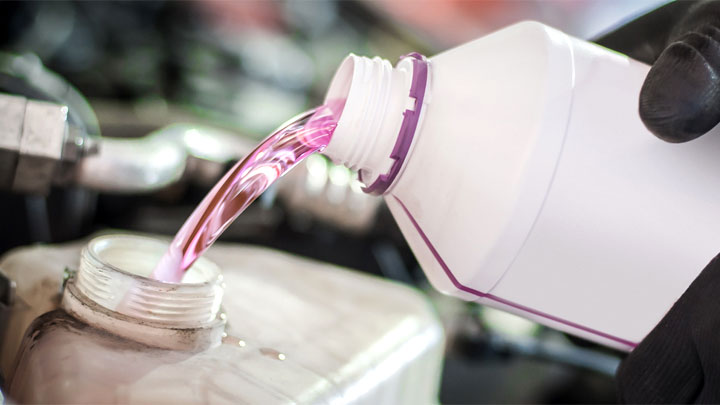 No. You should never take this risk. Coolant blends are decidedly different.

Sure, there are at least three manufacturers that make a so-called ‘universal’ 150,000 mile extended life coolant (yellow in color). But adding this to your car’s cooling system poses a risk. To be safe, all you need to do whenever some antifreeze is required is to purchase the type specified for your specific vehicle.

What if you are somewhere out in the boondocks and your cooling system springs a slow leak? Should this happen, you can always add distilled water to your cooling system. You could even add clean water from a nearby creek if you are desperate. But this is a temporary fix until you get back to civilization.

Why? Because adding that water will degrade freeze and boil-over protection. So you should soon have the system leak checked and the coolant mix either corrected to restore protection or the system flushed and refilled.

See Also: How to Flush a Car Radiator

Can I Add New Coolant to Old Coolant?

Yes, you can. But here’s the rule:

Also, when adding coolant, you should always use a pre-mixed 50-50 blend of antifreeze. Most cars will already have a 50-50 blend installed. So your addition of this blend of fresh coolant will not significantly disrupt the freeze and boil-over temperatures.

What Can Happen if I Use the Wrong Type of Coolant?

Adding the wrong antifreeze to your cooling system can result in coagulation of the coolant and clogging of the radiator or the complete system.

If severely clogged, the system cannot be easily flushed and may need a costly complete disassembly for decontamination.

An Important Caution with Pre-Owned Vehicles

Let’s say that you just bought a pre-owned car, maybe five years old or older and/or with more than 150,000 miles on the odometer. Your first service work on this car should be a complete cooling system drain and flush with the correct new coolant installed.

You may have little idea if such a service has ever been done for your ‘new’ car. So taking this step would be extremely wise on your part.