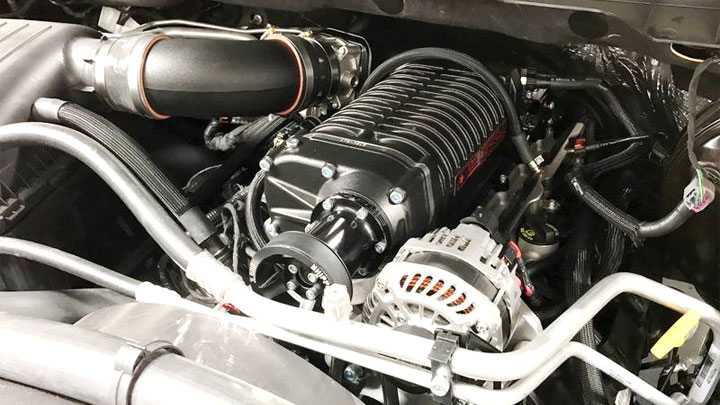 Internal combustion engines, as you are well aware, need fuel and air to run. The fuel is stored in the fuel tank and must be regularly replenished. The air is abundantly provided by the atmosphere around us and comes to us at a sea level pressure of 14.7 lbs/sq ft.

This works great, but that’s all the pressure you’re going to get to push air into your engine. You’ll get even less (accompanied by equally less power) when you climb over the Continental Divide on a high mountain pass in any of several western states.

What is a supercharger? How did the supercharger (sometimes called a blower or compressor) come into existence? How many types of superchargers are there? Let’s answer these questions.

What Is a Supercharger? 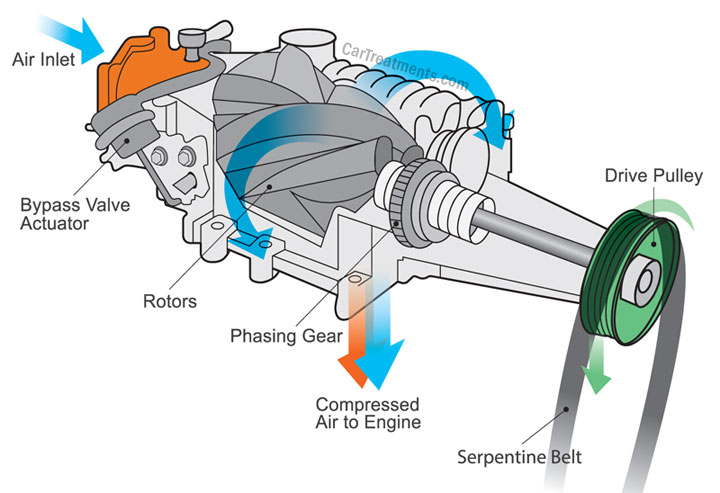 A supercharger is an engine (or electric motor) powered device that increases the air flow to the engine thereby increasing the power output of that engine. Since the early stages of internal combustion engine development for powering automobiles, trucks and, yes, airplanes, superchargers have been a part of the story.

The reason for this is quite obvious. Supercharging is a relatively simple way to substantially increase horsepower for almost any internal combustion engine design, whether two stroke or four stroke, gasoline or diesel. What practical engineer or enthusiastic car owner could resist such a temptation?

Let’s take a look at the types of superchargers, how they came into existence and how they work to vastly increase airflow to an engine.

Let’s go back in history to a time when most folks’ conveyances required large quadrupeds for horsepower. In 1860, the Roots brothers designed and patented a mechanical air mover for use in blast furnaces and several other applications. This was one of the first attempts at building a relatively efficient positive displacement blower.

The Roots blower progressed quickly and first appeared in an engine design patented by Gottlieb Daimler around 1885. Its use in production automobiles first occurred around 1921 with German luxury cars made by Mercedes.

These early superchargers proved able to add as much as a 30 to 40% increase in engine horsepower with little other changes to the engines of that era.

The Roots blower design was improved upon by General Motors (Detroit Diesel) primarily for two cycle diesel truck engines in the late 1930’s. These blowers were subsequently often applied to automobile racing engines.

Such applications are still prevalent today. At the drag strip, for example, it is common to see dragsters using Roots type superchargers perched atop huge engines.

Following the trail blazed by the Roots brothers, in 1878, German designer, Heinrich Krigar, patented the screw type compressor. Similar to the Roots blower it employed two parallel shafts but was able to produce a much higher pressure increase via the screw shape of its rotors.

Manufacturing complexity, however, delayed its wide industrial and automotive use for several decades.

A Swedish engineer, Alf Lysholm, in the mid 1930’s brought essential manufacturing technologies that reduced the cost of the screw design. This type of compressor soon found a niche in the air conditioning world and in other industries where very efficient high pressure outputs were required.

Today’s centrifugal superchargers use only a single impeller with complex curved vanes mounted inside a scroll shaped housing. Air enters the impeller near the housing center. The spinning impeller slings it to the outer passage of the housing increasing the air velocity.

The air is then fed through an increasing diameter diffuser which slows the flow and increases the pressure. This high pressure air is then forced through the induction system to the engine.

A major benefit with this type of supercharger is its relative simplicity. It has basically one moving part, the impeller. The impeller turns inside a housing with relatively large clearances making it reasonably low in manufacturing cost.

All of these types of superchargers are directly driven by the engine. Use of a gear drive system or a much simpler belt drive allows the supercharger speed and thereby boost to increase in proportion to increasing engine speed.

Outlet pressure to the engine can be varied depending on the driver’s need for power through the use of a bypass valve that opens when excess pressure must be vented. Air flow outputs from these superchargers are modulated in concert with fuel injection flow by the vehicle’s Powertrain Control Module (PCM).

Production automobiles that have benefited from supercharger technology include the historic Studebakers in the early fifties using Paxton blowers to the Ford Shelby Mustangs and popular Dodge hemi-engined automobiles.

Using compact screw-type compressors some of the Dodge street vehicles easily produce in excess of 800 BHP. A cautious right foot is in order with any of these amazing cars.

A fourth type of supercharger now emerging is electrically-driven. Any of the three blower configurations discussed above can be driven by a highly efficient permanent magnet DC (direct current) motor. This arrangement allows supercharger speeds to be continually fine-tuned to the engine’s need for air by the vehicle’s PCM.

An electric motor for turning the supercharger’s internal parts is a far simpler drive system than the complex belts or gears used in the mechanical drives. This could potentially be a cost reduction and a reliability improvement over the older mechanically driven superchargers.

Read Also: Supercharger vs Turbocharger (Which is Better?)

How Supercharging Benefitted the Aircraft Industry

Though costly in terms of dollars and tragic in the horrific human loss, wars have been the proving grounds for many advances in technology. This is also true with supercharging.

World War II saw the unfolding need for aircraft that could attain high altitudes. Normally aspirated piston-engined aircraft could not operate effectively in the thin air much above 20,000 feet.

Superchargers became common in those wartime fighter and bomber aircraft enabling altitudes of up to 50,000 feet. With such altitudes aircraft speed and range was also greatly enhanced.

The Engines Beneath the Superchargers

Supercharging can boost the combustion pressures and the power outputs of many different types of engines. Those pressure and power increases will always be accompanied by significantly higher engine temperatures and internal structural loads.

Designers have had to compensate for this with improved engine cooling and lubrication, upgraded metallurgy for engine housings and internal parts plus higher grades of fuel. These technology advances have been handed down to the cars and trucks we drive today.

See Also: What Is VTEC and How Does It Work?