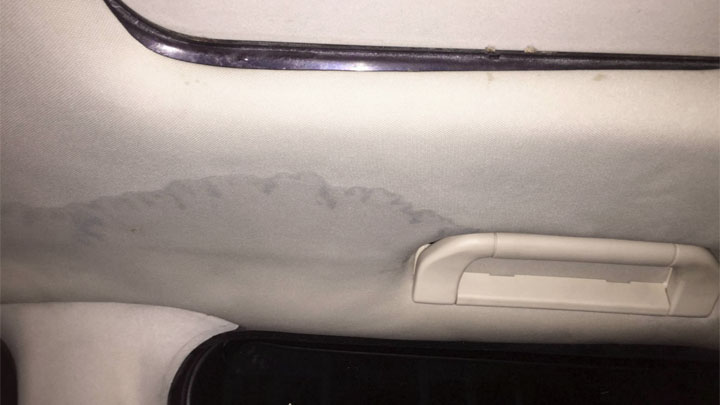 Note: This post may contain affiliate links. This means we may earn a small commission for qualifying purchases at no cost to you.
49 shares

We usually envision our vehicles as a safe haven from the rain, where we can seek cover during a rain shower, or drive from place to place without fear of becoming soaked. When equipped with functional wipers, and a quality set of tires, one can generally expect to travel about in their vehicle, relatively unaffected by rainfall of any amount.

However, this is certainly not the case when a vehicle’s cabin begins to leak water from one or more locations. Such situations can prove infuriating, as automotive water leaks can quickly damage a vehicle’s interior, proving to be far more than a minor inconvenience.

Problems of this type leave many car owners guessing, as it can be difficult to pinpoint the source of your vehicle’s leak. This causes heightened frustration, as a motorist faces the prospect of increased property damage, with each passing rain shower. The only resolution comes when the leak itself is repaired, and all water damage is rectified, however long this may take.

Read on to learn more about the causes of rainwater intrusion into the cabin of your vehicle, as well as how to handle such a situation should it arise at a later date.

Related: How to Get Water Out of Headlights

Why Diagnosing the Leak Isn’t Easy 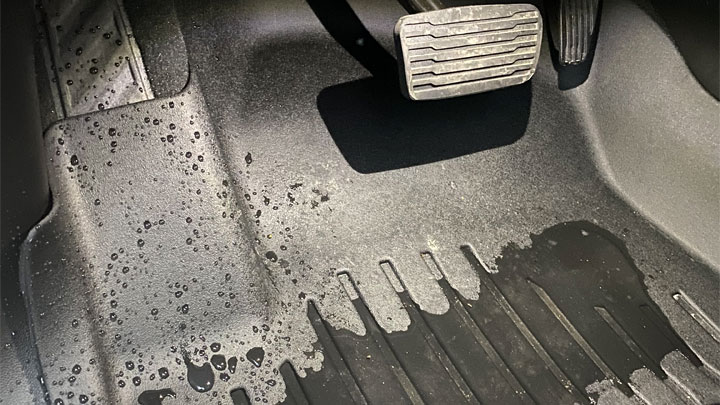 In many cases, diagnosing the root cause of a vehicle’s leaking interior is anything but simple. This stems from the fact that the point of entry for any incoming water is often concealed by a host of interior trim or paneling. Therefore, a leak of this kind is not actually discovered until moisture first soaks through any adjacent overlayment.

Additionally, leaking water will always follow gravity to the lowest possible spot within a vehicle’s interior, which typically includes the floorboard or trunk. In fact, in many instances, a leak of this type will appear as little more than wet floor mats, which first appear after washing your car, or driving through a downpour.

A leak, no matter how minor or major, is first diagnosed by isolating its origins to a certain portion of a vehicle’s interior. This involves carefully studying a vehicle’s windows, doors, and headliner. Even with such efforts, coming to a sure diagnosis often takes a fair amount of time.

What Damage Can a Water Leak Cause? 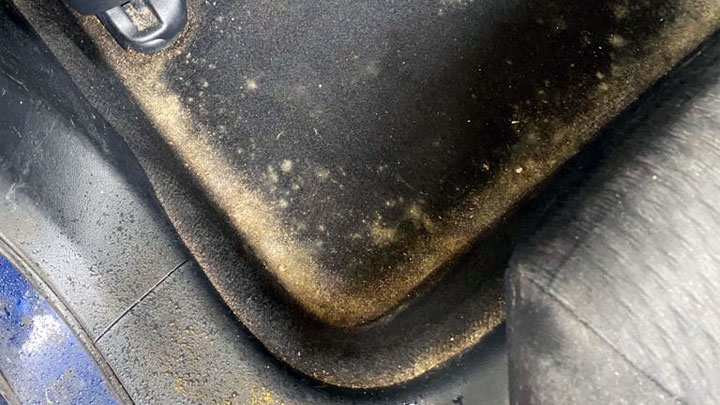 A vehicle’s interior can be damaged considerably by a water leak of much significance. Likewise, even minor unresolved leaks can cause a number of issues with time.

On the most minor end of the spectrum, water leaks can leave behind unsightly stains on a vehicle’s interior as well as a constant musty odor. However, in more extreme cases, the growth of mold and mildew can also become a rather aggravating issue.

Unbeknownst to many, water leaks within a vehicle’s cabin can also be the source of numerous electrical issues. The introduction of water into any electrical receptacle, such as that within your vehicle’s fuse panels or multi-function door switch can serve as a source of future corrosion.

Water can appear within your vehicle’s interior for a number of reasons, some of which tend to be somewhat more common than others. Nonetheless, recognizing each of these potential issues can prove helpful when attempting to remedy the situation at hand.

The following are several of the most sources of water within a vehicle’s cabin, following a rain shower. 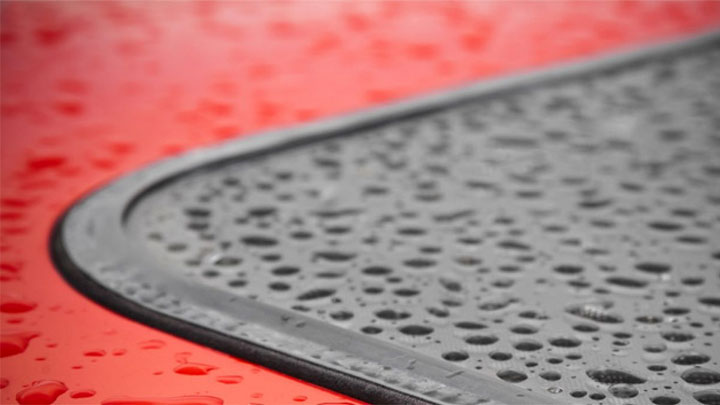 If your vehicle features a sunroof, there is no better place to begin your search for a problematic water leak. Sunroofs and moonroofs are notorious for leaking over time, causing a significant mess in the process.

Virtually all sunroof-equipped vehicles feature built-in drain tubes. These tubes reside beneath the vehicle’s roofline, within close proximity to the sunroof itself. If these tubes are clogged, water will likely flow into a vehicle’s cabin.

Upon opening a car’s sunroof, the opening to these drain tubes should be visible. Carefully inspect these openings to see if they are allowing adequate drainage, or if rainwater is pooling instead.

A rubber tipped blow nozzle can be used to direct airflow from a nearby compressor down each of these above-mentioned drain tubes. This should be done until all clogs are completely cleared. 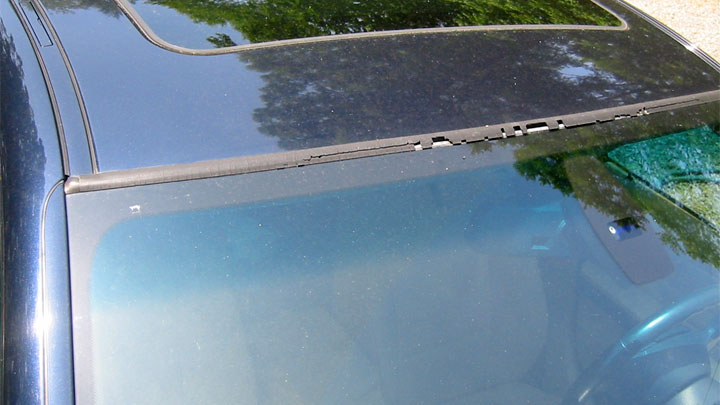 Another common cause of cabin water leaks is a damaged or dry-rotted windshield seal. These rubber seals generally prevent water intrusion around the edges of a vehicle’s windshield and typically last for years without issue.

However, a leak at this seal can prove troublesome, allowing for significant leakage.

Windshield seal leaks tend to be relatively easy to identify. If such leaks manifest along the upper edge of your vehicle’s windshield, the damp headliner might become evident.

On the contrary, leaks along the side or bottom edge of a windshield tend to result in a wet dashboard.

The only full-proof way to repair a leaking windshield seal is to have a vehicle’s windshield removed, and refitted by a qualified individual, with the use of a new seal.

Products designed to rejuvenate such seals are largely ineffective and are no substitute for proper repair.

Tip: When replacing your windshield, replace those squeaky windshield wipers as well. 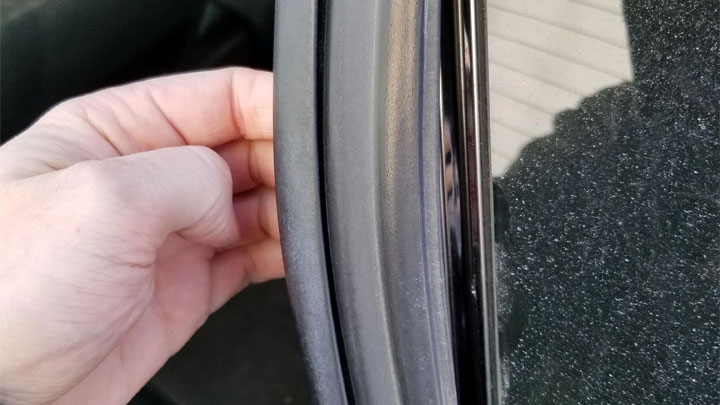 Like the windshield seal detailed above, each of a vehicle’s individual windows also features seals of their own. With age, these seals become brittle, and can often flake away, piece by piece.

When this occurs, a vehicle’s window loses much of its leak resistance. This condition often worsens with time, becoming quite a frustrating issue.

The presence of a leaking window seal can be identified in a matter of mere minutes with the use of a nearby garden hose. Carefully spray all questionable window seals from the outside of the vehicle, before turning off the hose, and checking for signs of water intrusion.

The only cure for window seal leakage is to replace the affected window seals themselves. Individual window seals can be ordered from almost any aftermarket manufacturer and can be installed in a single afternoon. 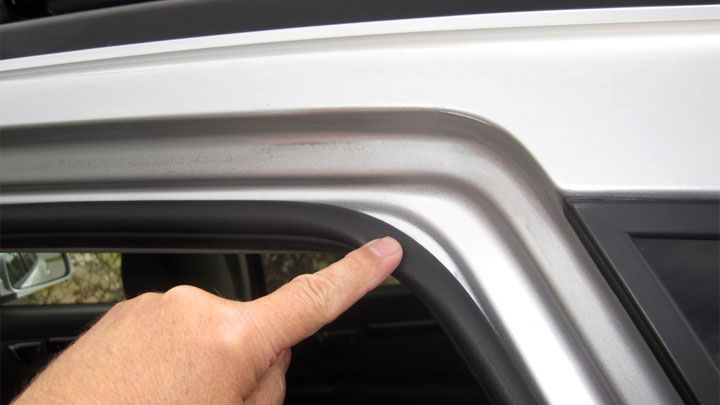 No matter the door type, a vehicle’s doors are also common sources of interior water leaks. A door’s first line of defense against water ingress is the door seal itself. The specialty weather strip prevents excess water from seeping into problem areas.

Likewise, vehicle doors also feature specialty membranes that allow any intrusive water to leak harmlessly through drain holes, to the ground below.

Carefully study your vehicle’s doors after a period of rain. Water leaking in, or around the outer edge of a vehicle’s door is a sure sign of door seal issues.

Along the same lines, water running into a vehicle’s floorboard from behind the driver’s side or passenger side door panel is indicative of a leaking door membrane.

Like any other automotive weather strip, door seals can become compromised with age, requiring replacement to remedy any concerns over leakage.

Door membranes can also be replaced as necessary, though many motorists simply patch these fixtures instead.

How to Dry Your Car After a Water Leak

Once you have repaired the source of your vehicle’s water leak, the next order of business involves drying out the car’s interior as thoroughly as possible. This, in itself, is no small task, and takes a fair amount of time to complete, if done correctly.

Failure to thoroughly rid a vehicle of any residual water can lead to additional interior damage and the appearance of mold/mildew.

The following steps can be used to aid in drying out your car after a water leak.

Related: How to Remove Mold From a Car Interior

All removable interior items should be pulled from the vehicle and dried individually with a blow dryer, or in front of a fan. This includes floor mats, seats, and carpets.

Additionally, trim-related items, such as door panels should also be removed from the vehicle.

At this point, absorbent items such as towels or oil-soak pads can be used to remove the majority of the remaining water. In certain instances, it might be necessary to leave these absorbent materials in place overnight.

With the bulk of water removed, you will now rid your vehicle of any remaining moisture. This can be done by placing a dehumidifier inside of your vehicle for 24-hours, with all windows in the closed position. An electric model would work best but a silica-based bag is another option.

Alternatively, a bowl of desiccant material or cat litter can be used with much the same results.