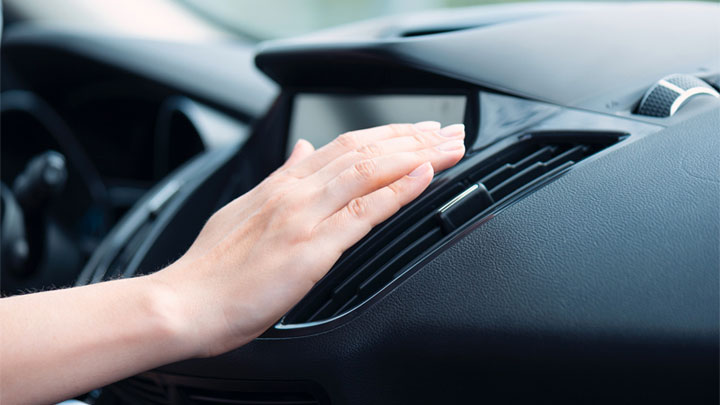 During much of the summer, sweltering heat befalls a significant portion of the country, turning the afternoon commute into quite an uncomfortable affair. Luckily, the majority of all vehicles now come standard with air conditioning (A/C), which has the ability to stop this stifling heat in its tracks.

However, it is worth noting that such systems only prove effective when everything is operating as intended. Like any mechanical system, a vehicle’s A/C is prone to occasional malfunction, at the hands of individual component failure.

While great strides have been made in the design quality of various A/C components over the past decade, issues of one type or another do still arise on occasion.

Read on to learn more about how your vehicle’s air conditioner operates, as well as the most common causes of a car A/C not blowing cold air since being stuck in a vehicle that’s blowing warm air out of the vents in the middle of a hot day is not something anyone looks forward to. 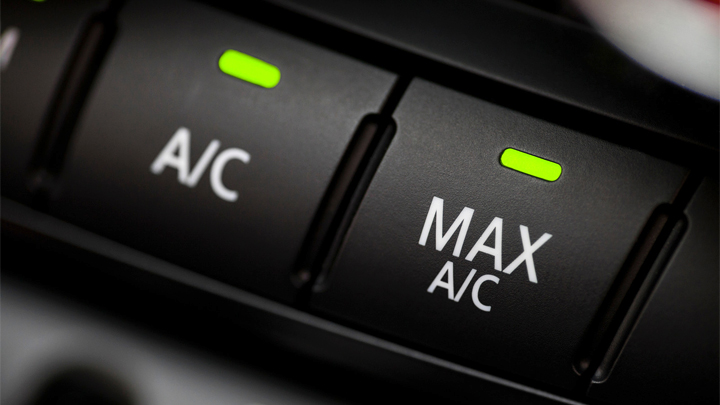 A vehicle’s A/C system cools cabin air by cycling refrigerant through a closed loop, in various physical states. Each of these changes in state directly correlates to temperature/pressure fluctuations within the system.

In order to facilitate proper operation, a vehicle’s A/C system must contain the proper amount of refrigerant, and be free of atmospheric air contamination.

See Also: Does A/C Use Gas or Electricity?

Such systems are also reliant upon a number of key components, each of which serves a vital function. These components, as well as their general purpose, are as follows.

The A/C compressor is responsible for pressurizing and cycling the system’s refrigerant. This component features a magnetic clutch, which is engaged when called upon by switched input or electronic demand.

An A/C system’s condenser is a thin, radiator-like device that is mounted behind a vehicle’s grill. When air passes across the condenser, the refrigerant within switches from a gas to liquid in state, thereby shedding heat along the way.

Depending upon the type of A/C system in use, your vehicle features either an accumulator or receiver dryer. The former of these devices is found only in orifice tube systems, while the latter is a main component in expansion valve systems.

These devices contain industrial-grade desiccant, which absorbs wayward moisture from within the system.

All automotive A/C systems rely upon a specialized metering device to dictate the refrigerant flow. Many of these systems utilize an orifice tube to complete this chore, while others use an expansion valve.

The exact location of these metering devices differs based upon system type.

An A/C system’s evaporator core is a compact heat exchanger, which is mounted beneath a vehicle’s dash. Refrigerant passing through a vehicle’s condenser switches from liquid to gas in state, as it gathers heat from within the cabin.

Outside of these main components, an A/C system also contains several sensors, all of which provide valuable feedback that is necessary for proper system operation. These sensors, as well as their general purpose, are as follows.

Causes of a Car A/C Not Blowing Cold Air

The following are several of the most common causes behind inefficient A/C system operation and cooling. 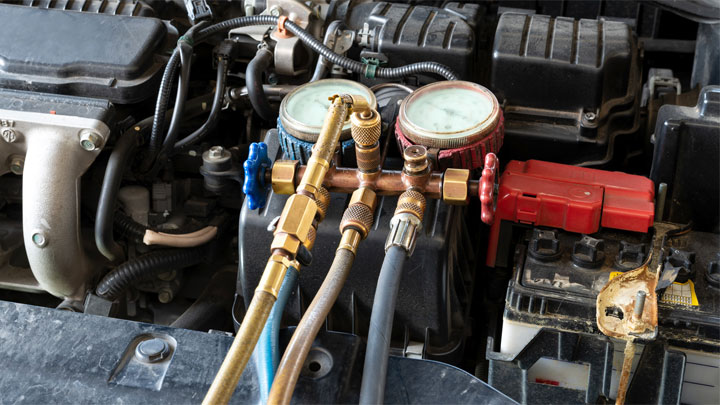 Low refrigerant is by far the single most common cause of poor A/C cooling. This low refrigerant level is often caused by a previously undiscovered leak within the system. In any event, the offending leak should be located and repaired as necessary, prior to system recharging.

While not as common as a low refrigerant condition, an A/C system’s efficiency can be stifled by excessive pressures. These higher than average pressures are often caused by system overcharging.

This generally occurs when a motorist attempts to introduce additional refrigerant into their vehicle’s A/C system, with the assistance of an at-home charging kit. 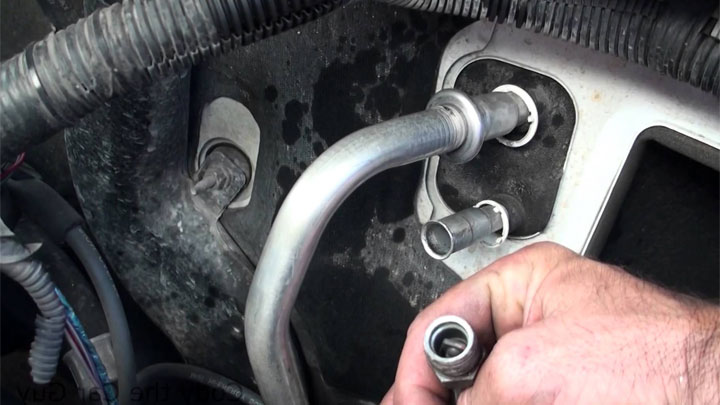 Restrictions within the A/C system can also serve as the root cause behind poor cooling. A restriction stifles refrigerant flow, often leading to inadvertent variances in system pressures. As a result, cooling often suffers quite dramatically.

Related: How to Clean a Cabin Air Filter 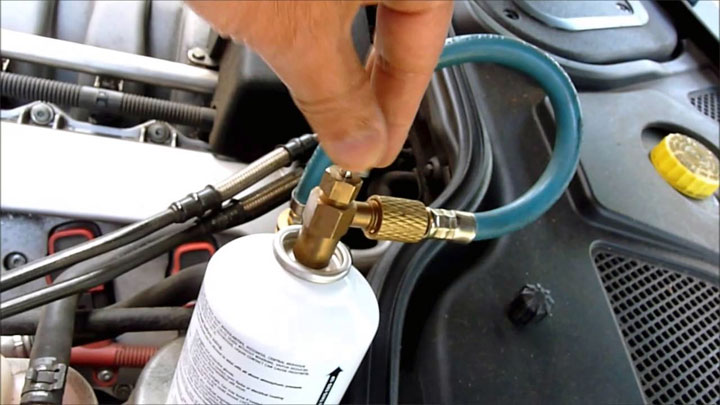 Air is often inadvertently introduced into such a system, during the use of an at-home charging kit. Excess moisture can also damage the desiccant found within the system’s receiver/drier or accumulator. 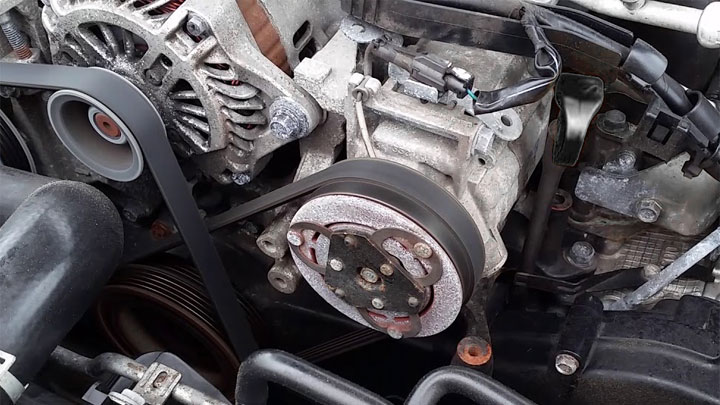 A compressor, which pressurizes an A/C system’s refrigerant, can quickly fail if starved for oil. When this occurs, all cooling ceases on the spot, and temperatures within a car’s cabin begin to rise.

One is also advised to flush the remainder of the A/C system, after experiencing an internal A/C compressor failure.

An A/C compressor relies upon the use of a clutch, which engages upon command to drive the rest of the unit’s internal components. This clutch is magnetically actuated and is released back into the free-wheel position when all power is withdrawn.

When an A/C clutch fails, engagement of the system’s compressor will become impossible. 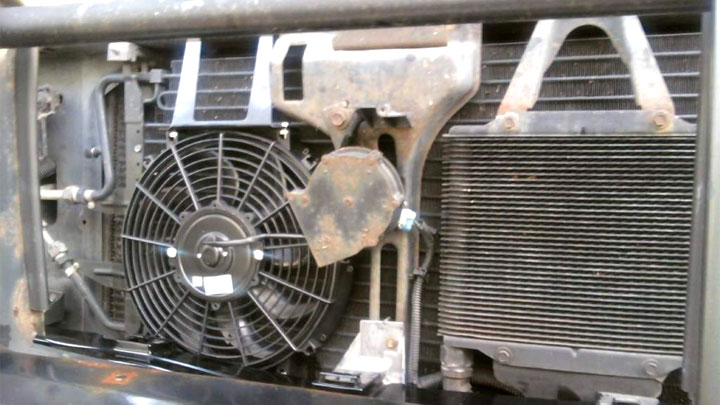 Cooling efficiency can also suffer at the hands of an non-operational condenser fan. The condenser requires adequate airflow at all times, to keep high side system pressures in check.

If your vehicle is not blowing cold air when idling, yet cools as designed when accelerating, a faulty cooling fan is almost always to blame.

If any of an A/C system’s numerous sensors were to fail, the operation would be adversely affected. The vehicle’s computer would face significant difficulty when attempting to determine correct compressor clutch duty cycles.

How Much Will It Cost to Fix?

The exact cost of A/C system repair can vary greatly and is often dependent upon the type/extent of failure at hand. Additionally, the retail price of individual components within a vehicle’s A/C system can differ significantly from one make or model to the next.

In general, one can expect to pay somewhere in the ballpark of $150-$300 to have their A/C system recharged with refrigerant. This assumes no major system leaks are present, and that refrigerant levels have only decreased due to gradual loss over the course of several years.

On the other hand of the spectrum, one can expect to pay significantly more in the event of an internal A/C compressor failure. When this occurs, the system itself must be flushed, prior to the installation of a new compressor.

The system’s metering device and receiver/dryer (or accumulator) should also be replaced. Including labor, a job of this caliber typically costs an average of $500-$1,100.

How to Prevent Future A/C Problems 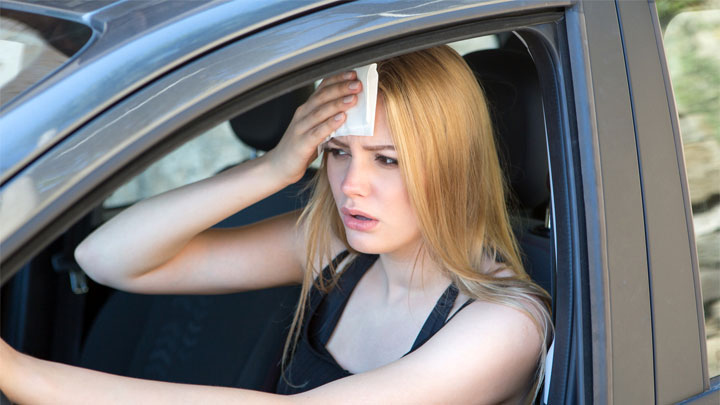 In some cases, A/C system-related failures are unavoidable. However, in other instances, such issues can be largely avoided with simple maintenance. This most notably includes having your vehicle’s A/C system serviced at factory specified intervals. For many makes and models, this service interval is generally around the 100,000-mile mark.

Related: How to Prevent Smells Inside Your Car

A basic A/C service typically involves ensuring that your system is filled to capacity with refrigerant and that no obvious leaks are found. A service technician will connect a set of gauges to your vehicle’s A/C charging ports, before reading the system’s high and low pressures. This will provide the technician with information regarding the system’s rate of charge.

If these pressures are lower than intended, the system’s refrigerant will be topped off, or alternatively, evacuated and recharged. A technician will also seek out the source of any offending leaks with a UV light. Repairs can then be made as necessary.

A preventative A/C service, such as that described above, is quite valuable when intended to extend the service life of various components within your vehicle’s A/C system.

Services of this type prevent your vehicle’s A/C system from running low on refrigerant, which will cause a compressor to short cycle on an ongoing basis. This short cycling ultimately accelerates the wear of the A/C compressor’s internal components, as well as its magnetic clutch assembly.