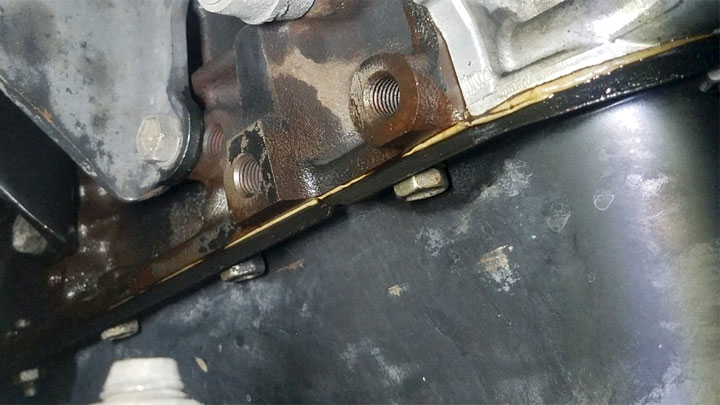 Given enough time and mileage, every engine will eventually begin to leak oil. This stems from the fact that no gasket is impervious to fatigue, at the hands of repeated and prolonged exposure to heat. Unfortunately, a leak here or there is to be expected from any engine.

Oil leaks can originate in many different locations throughout an engine, some of which are far more troublesome than others. From an engine’s valve cover gaskets, to the all-important head gasket, an oil leak can take on many different forms. However, few gaskets tend to be quite as prone to leakage as the oil pan gasket.

A vehicle’s oil pan gasket is located between the upper flange of an engine’s oil pan and the lower lip of an engine’s block. This gasket prevents oil leakage from around the oil pan’s mounting surface and is often composed of rubber or cork material. Though relatively hearty by design, an oil pan gasket is subject to eventual leakage, no matter the model of the vehicle.

Read on to learn more about oil pan gasket leaks, as well as the costs associated with remedying such an issue.

There are several symptoms that often accompany an oil pan gasket leak, especially if such a leak is relatively severe. Recognizing these symptoms is the first step to identifying and repairing a leak of this type.

The following are several of the most common symptoms associated with a leaking oil pan gasket.

If you check your vehicle’s oil, only to notice that your engine’s oil level is lower than expected, your engine might be leaking oil from its oil pan gasket. A relatively severe oil pan gasket leak can dump far more oil in its wake than most would expect. This, in turn, is reflected by an engine’s dipstick.

While a low dipstick reading does not pinpoint an oil pan leak as the problem at hand, it does provide you with a notion that such an issue could potentially be at fault. Therefore, it would be in your best interest to give your vehicle’s oil pan gasket a solid once-over.

Another sign of a potential oil pan leak is the sudden appearance of an oil stain within your driveway. This signifies that enough motor oil has leaked from your vehicle’s engine to coat any surface that it is parked over for prolonged periods.

In many cases, the relative severity of this leak can be uncovered by analyzing the size of such stains. The larger the stain, the more severe a leak of this type tends to be.

Like the oil loss mentioned above, an oil spot within your driveway serves as no reliable indicator toward the actual source of a vehicle’s oil leak. However, such circumstances do cast doubt upon the integrity of your engine’s various gaskets, including the oil pan gasket.

A leaking oil pan gasket is also often accompanied by the smell of burning oil. Unlike the smell presented by an engine that is actively consuming and burning oil, a damaged oil pan gasket conveys a smell of fresh oil that has been heated to engine operating temperature, therefore presenting a strong odor.

This smell generally grows stronger, as the severity of an oil pan gasket leak increases.

The presence of this “burnt” oil smell occurs as motor oil escapes to the exterior of an engine through a faulty gasket. This oil, now permeating the exterior of the engine, is heated to high levels and puts off a significant amount of odor that is easily detected by anyone nearby. 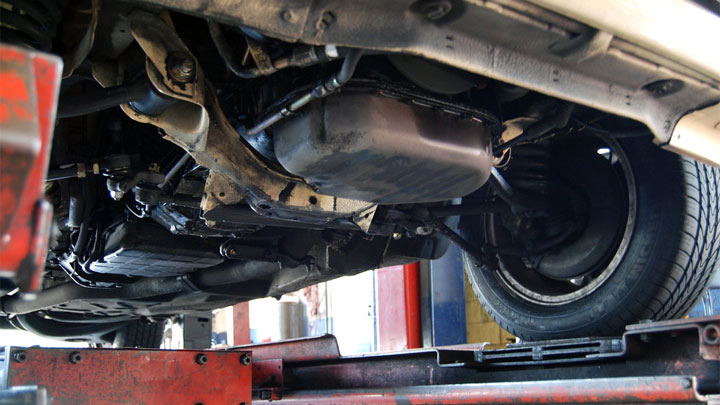 A severe oil pan gasket leak can cause engine oil to be spread across a vehicle’s undercarriage. This is due to the effects of blowback, as they apply to a traveling vehicle.

As air rushes beneath a vehicle’s undercarriage, it sweeps any oil rearward that has wept from a failing or faulty oil pan gasket. The spreading of this oil grows more substantial as a leak grows in severity.

In certain cases, this undercoating of oil can contribute to the odor mentioned above. As oil is swept across a vehicle’s exhaust, it is superheated to the point of creating a noticeable odor. This odor is relatively easy to discern, as a vehicle’s exhaust reaches extremely high temperatures.

Most modern vehicles feature a low oil light upon their instrument cluster, which is illuminated in the event of significant oil loss. In many cases, this light only illuminates when an engine’s oil has reached critically low levels.

Therefore, one should pull over and shut their vehicle off as soon as possible, upon noticing the illumination of this light. Doing so can potentially spare your engine from substantial harm.

Though uncommon, a compromised oil pan gasket can occasionally leak enough to cause severe oil loss. When this occurs, an engine’s oil level can drop at unprecedented rates, thereby causing an engine’s low oil light to be illuminated, as described above. 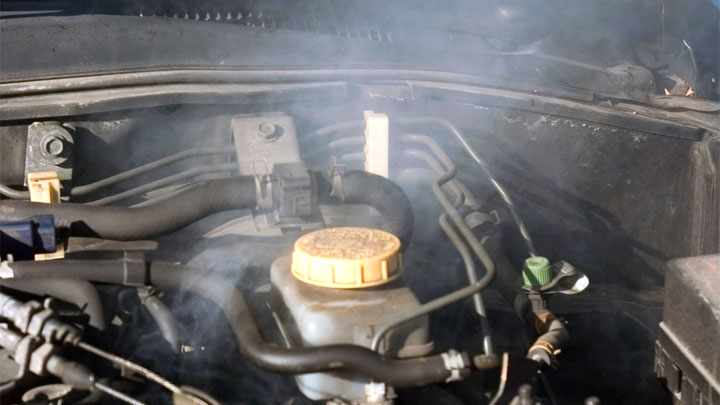 Leaking oil is burnt when heated to considerable temperatures, such as those produced by a vehicle’s engine. As a byproduct of this heating, a certain degree of smoke is often produced.

Therefore, leaking oil, such as that which escapes from a faulty oil pan gasket, is often heated considerably, to the point of producing a noticeable amount of smoke. This smoke often serves as a dead giveaway that a noteworthy oil leak is present.

Additionally, the smoke created by an oil pan leak only increases if this leak causes oil to be deposited upon a vehicle’s exhaust. This stems from the fact that a vehicle’s exhaust is much hotter than the majority of an engine’s components, thereby expediting the heating process.

In most cases, a leaking oil pan gasket is considered to be a moderately-serious issue. This is due to the fact that severe oil loss can cause a number of relatively severe issues, including eventual engine damage.

Even if a leak is not yet severe enough to cause such issues, it is only likely to worsen with time. Therefore, a leak of this type should be addressed and remedied as soon as possible.

At the very least, motorists who know that their oil pan gasket is leaking, should carry an extra quart of oil, and check the engine in question’s oil level on a daily basis.

If gone undetected, a substantial loss of engine oil can cause extensive premature engine wear. This wear is irreversible, without subsequent overhaul or rebuild.

Can You Drive With a Leaking Oil Pan Gasket?

You can indeed drive with a leaking oil pan gasket. However, you should be extremely careful in doing so. Upon becoming aware of such a leak, an engine’s oil level should be checked on a daily basis to prevent severe complications.

In any event, all oil loss should be rectified by adding the correct amount of engine oil as necessary.

Nonetheless, a leaking oil pan gasket should be replaced as soon as possible, without exception. If you do not feel up to the task of tackling such repairs on your own, you should contact a trusted service center to schedule a proper repair at the first available opportunity.

What Causes the Gasket to Go Bad?

Another common cause of oil pan gasket leaks is accidental impact. If an oil pan is struck by another object, the seal of the engine’s oil pan gasket is likely to be disturbed, thereby risking leakage. As a general rule, the harder the impact, the more likely a leak becomes.

The exact cost associated with oil pan gasket replacement can vary significantly from one particular model of vehicle to the next. This is due to the fact that such replacement might necessitate a greater deal of labor in relation to one vehicle, than another.

The cost of an oil pan gasket itself also differs depending on the vehicle. Nonetheless, the cost associated with oil pan gasket replacement typically falls into the range of $150-$500. While this range is relatively broad, so is the input of time and effort required to complete such repairs.