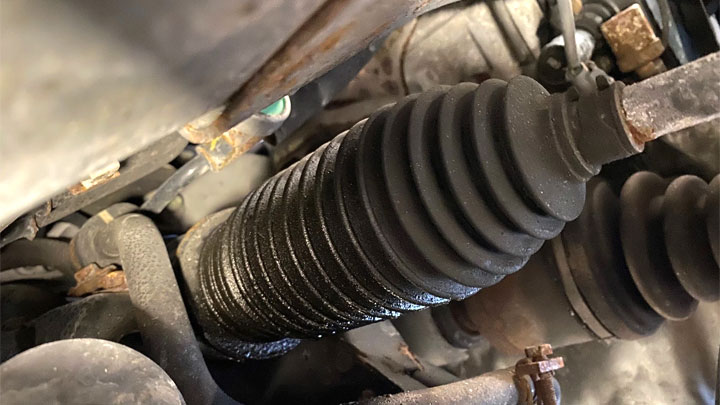 For the average motorist, few circumstances are as frustrating as that which surrounds the sudden appearance of oily residue on the driveway. This, of course, is the tell-tale sign of a fluid leak, which indicates that your vehicle is experiencing a mechanical issue of one sort or another. Be this as it may, one must determine where their newly discovered leak has originated from.

When most think of an oil spot in their driveway, they envision a motor oil leak, dripping from their vehicle’s engine, onto the blacktop below. Or, maybe a transmission fluid leak comes to mind instead. While both of these potential sources warrant further inspection, the true source of such a leak might be something else altogether. 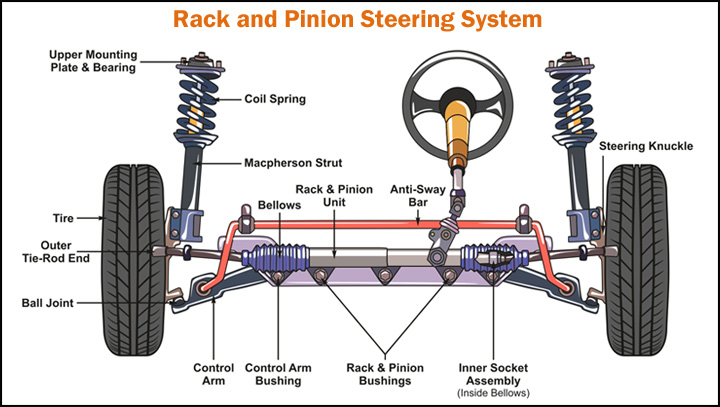 When attempting to determine the source of a newly identified oil leak, few give much consideration to their vehicle’s power steering system. More specifically, few motorists recognize the tendency of a vehicle’s rack and pinion to leak with age. Issues of this nature are not only aggravating, but surprisingly common.

Read on to learn more about rack and pinion leaks, as well as how to proceed, should your vehicle experience similar issues in the future.

Signs of a Leaking Rack and Pinion

There are a number of tell-tale symptoms that often accompany the onset of a rack and pinion leak. While not all of these symptoms will be present in every case, they are prevalent enough to warrant mentioning.

The following are several of the most common symptoms associated with a leaking rack and pinion.

Therefore, the sudden appearance of oily spots within one’s driveway serves as a reliable indicator that something is amiss. While a leaking rack and pinion might not be to blame, it is worthy of closer inspection. 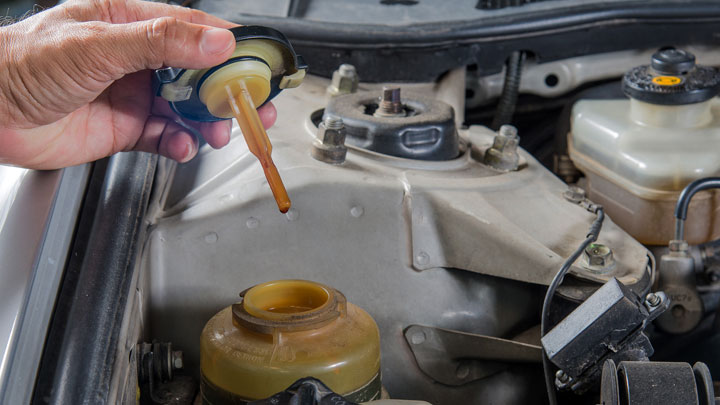 As power steering fluid is lost through a leaking rack and pinion gasket, the level of fluid within the power steering system is depleted. The speed at which this fluid is depleted is directly dependent upon the severity of the leak itself.

In some cases, fluid might leak gradually over the course of months. In other, more severe cases, fluid loss can happen far more abruptly.

Another potential symptom of a rack and pinion leak is audible noise that occurs when turning from one direction to the next. This sound is often described as a hum or whine, and is generally caused by excessive power steering fluid loss.

This loss of fluid causes the power steering system to aerate, leading to a host of unusual symptoms.

This disappearance of power steering fluid can occur at multiple points throughout the system. While fluid can be purged from damaged hoses or a faulty pump, the rack and pinion itself is also suspect. A careful inspection of the rack and pinion will assist you in narrowing down your search.

In certain instances, a vehicle’s steering will be negatively impacted in the event of a rack and pinion leak. This generally occurs when an excessive amount of fluid has leaked from the system, allowing aeration to take place.

Such difficulties might even be accompanied by a noticeable humming or whining, such as that described above.

In some instances, normal steering can be restored by simply topping off a vehicle’s power steering fluid. However, in more severe cases, steering might show no noticeable improvement, especially if overheating has occurred due to prolonged periods of operation in absence of ample fluid.

In such cases, only a full replacement of a vehicle’s rack and pinion system will remedy the issue at hand.

Seal failure serves as the most prominent cause of power steering rack leaks. This stems from the fact that a vehicle’s rack and pinion is under extreme hydraulic pressure, presenting ample opportunity for leakage to take place.

Simply put, the smallest of imperfections in any of a rack and pinion’s seals, will allow pressurized fluid to leak in abundance.

The typical rack and pinion assembly features three main seals, including one at the steering shaft inlet junction, and one at each outboard end of the assembly. Each of these three seals are known to leak in certain scenarios, especially with age and typical wear.

As time passes, the rubber composition of a seal begins to deteriorate. This deterioration often manifests as dry-rot and cracking. Rubber seals can also dry and shrink, leading to concerns over unseating.

In any event, the true extent of such damage is quickly revealed when exposed to high-pressure power steering fluid.

Is It Safe to Drive With a Leaking Rack and Pinion? 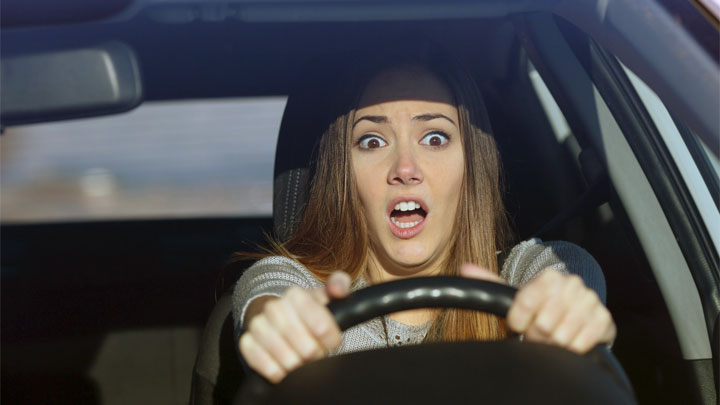 It is not advisable to drive with a leaking rack and pinion, nor is it considered safe to do so. The rack and pinion plays a pivotal role in the operation of a vehicle’s power steering system. Therefore, any serious rack and pinion related issue can prove quite aggravating, if not dangerous.

Any fluid leak from a vehicle’s rack and pinion poses the risk of eventual unit failure. As fluid is lost, hydraulic power within the rack and pinion itself is reduced. This will cause a vehicle’s steering to stiffen, requiring additional force to be exerted upon the steering wheel to negotiate turns.

The main danger in driving a vehicle with a leaking rack and pinion, is that a sudden or unexpected loss of power steering can pose an enormous safety risk, especially if this were to occur at highway speeds.

If a motorist does not possess the strength to manually steer their vehicle, a wreck will likely occur as the outcome of this situation.

In the vast majority of situations, it proves far more economical to replace an entire rack and pinion assembly, rather than attempting to repair individual fluid leaks within the unit itself.

While this might seem counterintuitive when considering the purchase price of a new rack and pinion, such expenditure is often surpassed by the labor costs associated with rack and pinion repair.

Keeping this in mind, it is reasonable to assume that one would be better off purchasing an entirely new rack and pinion rather than simply repairing their aged assembly, if there is little to no discernable difference in price.

Additionally, a newly purchased rack and pinion will typically come with a warranty, while a repaired rack is unlikely to be covered by any such policy. This, in itself, comes as a substantial value, and provides you with additional peace of mind.

The average prices for rack and pinion replacement and repair are as follows.

Will a “Stop Leak” Product Fix the Leak? 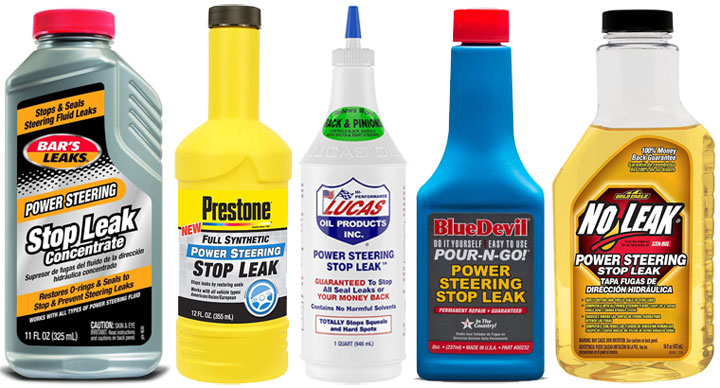 In general, power steering orientated “stop leak” products such as those by Lucas or BlueDevil serve as a band-aid for much larger issues. Products of this nature seldom fix a power steering leak, instead providing temporary relief from fluid loss at best. A leak will typically return to its previous state within a matter of days to weeks.

This stems from the fact that fluid within a power steering system is circulated at high pressure. As a result, it is nearly impossible to stop such a leak, by any other means than through complete unit replacement.

This can be quite aggravating, as rack and pinion replacement tends to be quite labor intensive, and costly to complete. Even a rack and pinion assembly itself is no cheap component to purchase.