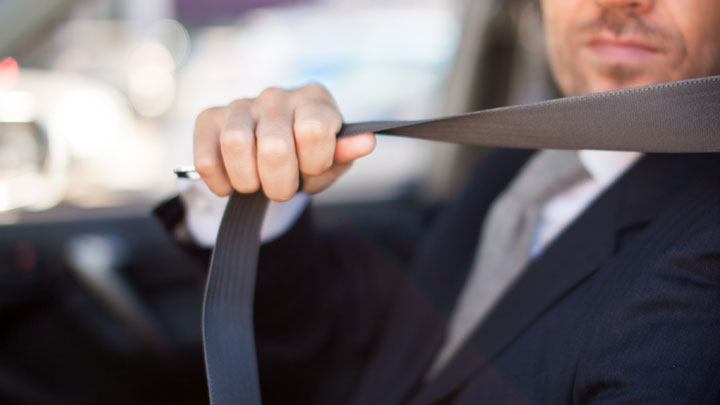 The occasional accident is an unfortunate, yet often unavoidable, part of spending time behind the wheel of a car.

While some might drive their entire lives without experiencing so much as a fender bender, most motorists have been involved in at least one accident at some point throughout the years.

As most are well aware, when such instances do occur, a properly functioning seatbelt and airbags are often the only thing standing between a vehicle’s occupants and grave injury.

However, much like any other vehicle component, seat belts do occasionally malfunction.

When this occurs, more than a minor inconvenience is presented, as one’s safety is on the line. Read on to learn more about seat belt function, and how to fix a seat belt that is jammed, or otherwise malfunctioning.

Parts of a Seat Belt 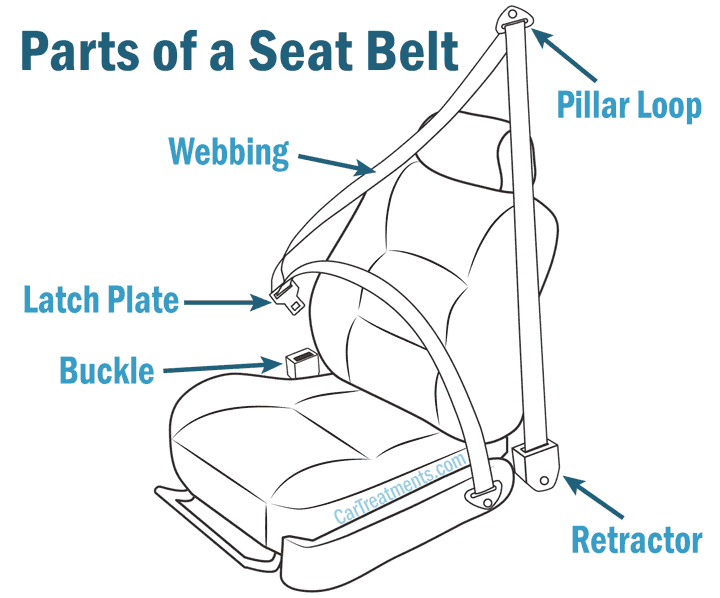 While a seat belt often appears rather simple in design to the casual observer, such units are made up of several individual components, which operate cohesively to keep a vehicle’s occupants safe.

The following are the five individual components that comprise a vehicle’s restraint system.

A seat belt’s buckle serves as the receptacle into which a restraint’s latch plate is secured. When fastening your seat belt, its latch plate snaps into the system’s buckle, where it is locked in place until manually released.

A seat belt’s latch plate is capable of sliding up and down on a restraint’s webbing, and locks in place when inserted into its corresponding buckle. The latch plate is then released from its buckle when the unit’s buckle release is depressed.

A seat belt’s webbing is often referred to as the “belt” by motorists, because it wraps around a vehicle’s occupant, and serves as a restraining device in the event of a collision. Seat belt webbing is made of polyester fibers, and is designed to withstand immense shock loads.

A seat belt’s pillar loop is affixed to the area over a motorist’s shoulder, and allows the webbing of a seat belt to be pulled out or retracted for proper fitment and comfort. Pilar loops often differ in design from one vehicle to the next and are typically manufacturer specific in nature.

A seat belt’s retractor is responsible for the inward and outward distribution of webbing under normal operating conditions.

A retractor is also responsible for locking a seat belt’s webbing in a fixed position when it is yanked outward in an abrupt fashion, such as in the case of a collision. In most cases, a retractor will lock a seatbelt in place after an accident as well.

Related: Steering Wheel Locked Up While Driving? (What to Do)

How to Fix a Seat Belt That Won’t Retract 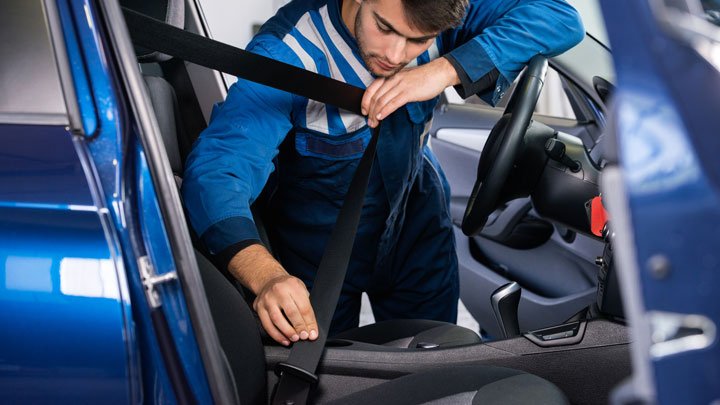 One of the most commonly experienced of all seat belt related issues is that of a seat belt that will not retract, or that has been pulled too far out and locked.

While it is possible to use a seat belt repair service such as MyAirbags.com or SafetyRestore.com to restore a retractor’s functionality, it is important to remember that you are dealing with safety-sensitive equipment, and such repairs are best completed by a trained technician.

Luckily, the root cause of a sagging seat belt or seat belt that fails to retract is often simply the result of twisted webbing. When this occurs, follow the steps below to restore the unit’s functionality.

Related: How to Fix a Car Door That Won’t Latch

Begin by unbuckling your seat belt, thereby creating slack in the unit’s webbing. Slowly feed the seat belt backward, if possible, in an attempt to allow 1”-2” of retraction.

Now, slowly pull your seatbelt outward, until it is fully extended. This should clear any webbing twists that are present. If you feel any resistance during this step, a twisted belt likely is to blame.

#3 – Study Belt for Signs of Twist

As you continue to pull your seat belt outward, look for signs of twisting in areas of low clearance. Pay close attention to the seat belt’s pillar loop, or any location where the seat belt disappears behind trim paneling.

If you noticed outward resistance when completing the steps listed above, but have been unable to remedy the issue at hand, it might be necessary to remove any pillar trim that shrouds your seatbelt’s components.

This will allow you to physically check for obvious twists or other irregularities.

How to Fix a Seat Belt That Won’t Pull Out 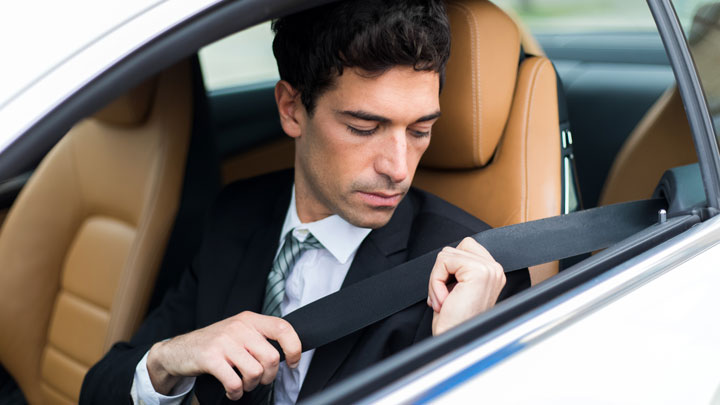 Another commonly encountered restraint system issue is that which pertains to a seatbelt that will not pull out, leaving motorists unable to secure themselves into their vehicle.

This is also an issue that can have multiple root causes, including a faulty or damaged retractor.

However, before a retractor is condemned and replacement is initiated, one can attempt a simple fix, which often provides a satisfactory resolution. Doing so is as easy as following the steps below.

In the case of a seat belt that will not pull out, an obstruction of some type within the belt’s retractor is often to blame. To remedy this issue, begin by manually feeding your seatbelt back into its retractor to create slack.

You will now study your seat belt’s retractor, in a bid to uncover any obstructions which might be causing the issue at hand. In some cases, you might have to remove pieces of trim paneling in order to gain access to this retractor.

Dirt, gravel, or any other type of debris can lead to retractor issues and must be cleared to provide optimal functionality.

If your inspection reveals signs of a twisted seat belt, you must eliminate this issue to restore full functionality. Doing so often requires an individual to manually turn their retractor inward, thereby creating additional slack.

A flat head screwdriver can then be used to rectify any twisting that has occurred.

You will now test your seat belt to see if it is able to be pulled outward. If problems persist, you can attempt to jar lose any internal binding that has taken place within the seat belt’s retractor.

This is done by firmly grabbing the seat belt’s webbing, and giving 2-3 swift, forceful tugs. In many instances, doing so will often free up bound or misaligned retractor components, thereby restoring functionality.

See Also: Common Causes of an Airbag Light Coming On 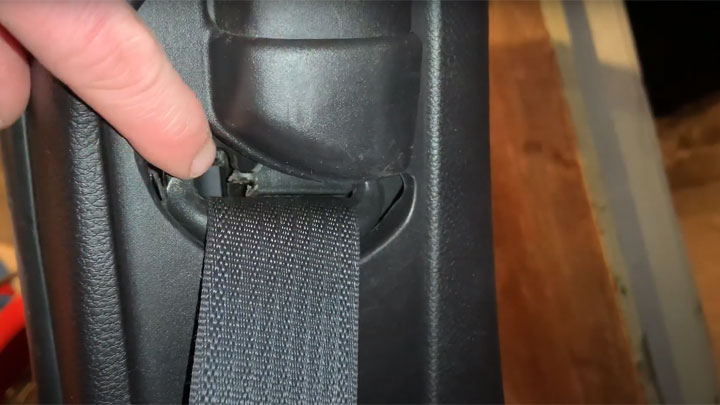 There are also several other seat belt related issues that all too often plague motorists and their vehicles. The following are some of the most common of these problems.

Motorists are often faced with a seat belt that is slow to retract. A kinked or twisted seat belt is often to blame.

When this occurs, slowly pull outward on your seatbelt until it is fully extended, while checking for the presence of twist. Then, slowly allow the belt to retract to its rest position.

In some cases, an aging seat belt that has become stiff from contamination with dirt and other particles can be to blame for slow retraction. To remedy such issues, the seat belt in question can be pulled outward and cleaned with soapy water.

With time, a seat belt buckle’s release button can become increasingly difficult to depress. This can be frustrating, to say the least, and is a common cause of concern for many motorists.

While the internal mechanical failure of a seat belt buckle does occur on occasion, one is far more likely to encounter a buckle that has become contaminated with dirt, sticky substances, and other forms of debris.

In order to remedy such concerns, rubbing alcohol or electrical contact cleaner can be used to wash away contaminant deposits. Cleaning a buckle in this manner takes only minutes, and often restores full functionality.