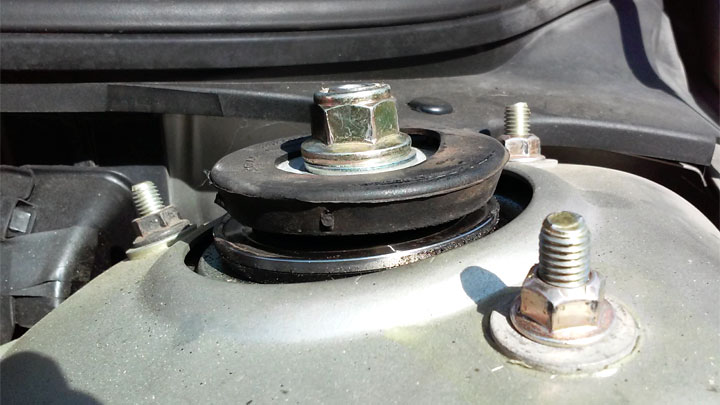 The health and condition of a vehicle’s suspension system are extremely important and absolutely pivotal to a car, truck, or SUVs ability to operate in the most efficient manner possible. In fact, unbeknownst to many, an automotive suspension system does much more than simply cushioning a vehicle’s ride.

In reality, each individual suspension component serves a specific purpose. Together, these components are engineered to enhance a vehicle’s ride quality to the most optimal level.

Of these suspension components, few are as vital as a vehicle’s struts. Struts operate as dampers, creating a smooth, even ride under a wide variety of operating conditions.

However, a strut is only as capable as the mount to which it is affixed. Strut mounts are instrumental in reducing noise/shock transfer, and in some cases, even prove vital to front end/wheel alignment.

Unfortunately, strut mounts do wear out with time, warranting eventual replacement. When this occurs, a number of symptoms are often presented.

Read on to learn more about the various symptoms of a bad strut mount, as well as how to handle the matter of strut mount replacement.

What is a Strut Mount? 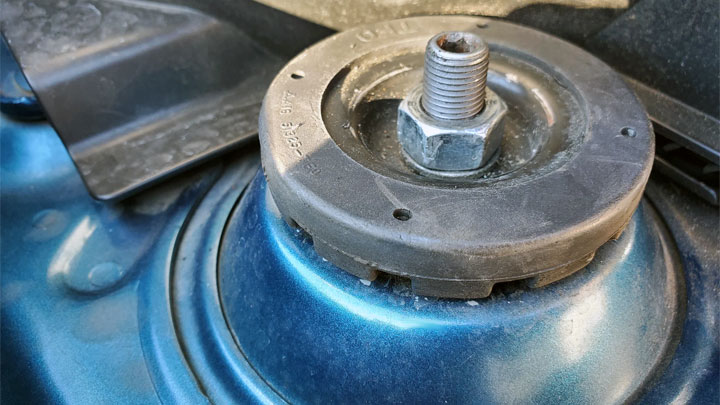 When one speaks of a worn strut mount, they are most often referring to a strut’s upper mount. Simply put, an upper strut mount serves as the point of attachment between the upper end of a strut, and the chassis of the vehicle to which it is affixed.

The first purpose that an upper strut mount serves is to insulate against the transfer of road noise and vibration to a vehicle’s chassis. This increases driver comfort, and drastically reduces the harshness associated with less than adequate road conditions.

Additionally, most upper strut mounts now include a set of bearings. These bearings allow the strut itself to pivot while steering. As a result, a vehicle’s front struts (whether KYB or Monroe or other) prove integral in aligning a car’s front end, thereby preventing irregular tire wear and numerous steering related issues.

Related: Shocks vs Struts vs Coilovers

Signs of a Bad Strut Mount

The impending failure of a vehicle’s upper strut mount is generally accompanied by one or more symptoms. While these symptoms do often vary from one model of vehicle to the next, a number of these symptoms tend to be far more prevalent than others.

The following are several of the most common signs associated with a bad strut mount.

One of the most common symptoms of a faulty strut mount is excessive noise and/or vibration while driving. This is due to the fact that a vehicle’s strut mounts traditionally isolate a car’s chassis from such noise/vibration.

However, significant wear compromises a strut mount’s ability to serve as a viable buffer. As such, subtle rattles and squeaks become evident, many of which grow ever more evident with the passing of time.

As strut mounts begin to age, additional wear and tear are often imparted upon a vehicle’s additional suspension components. This includes a vehicle’s shock absorbers, as well as a broad range of front end bushings.

As a result, a number of far more troublesome secondary issues can arise, many of which negatively impact a vehicle’s handling. 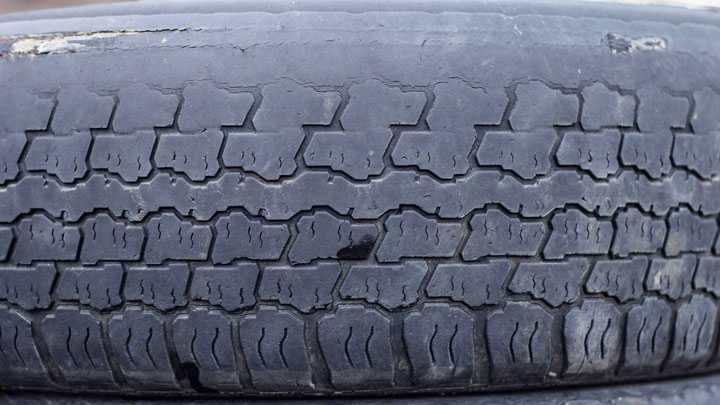 Since a vehicle’s upper strut mounts play a pivotal role in aligning the front end of many models, wear to such components can quickly throw front-end geometry out of specification. In fact, a vehicle’s toe settings can be adversely affected to the point of causing rapid tire wear.

This should be especially evident if a vehicle’s tires had been recently replaced. 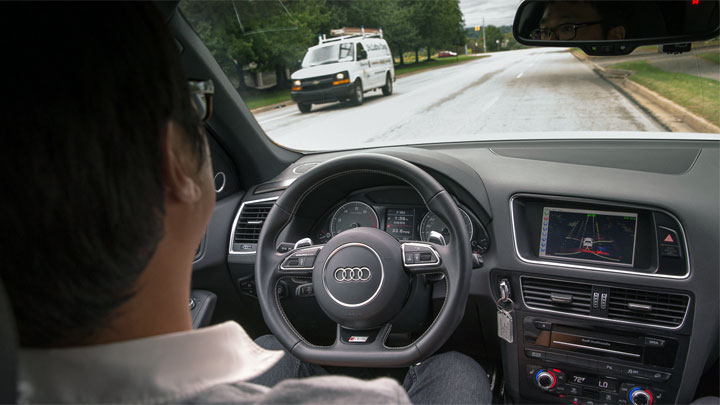 A vehicle’s caster setting can be negatively affected in much the same manner as its toe setting, in the event of strut mount failure. This, of course, is also due to changes caused in front end geometry at the hands of upper shock mount wear or failure.

Unfortunately, the only way to remedy such issues involves replacing all worn strut mounts, before performing a front end alignment.

In certain instances, a severely worn strut mount can lead to a definite “clunking” within a vehicle’s front end. This noise differs from the occasional rattle or squeak mentioned above, and can even be felt by a vehicle’s occupants in some situations.

This is due to the excessive strut play caused by the deterioration of the mount in question. This play will only be eliminated with the replacement of this mount, following a thorough inspection for additional front end damage.

In the majority of cases, strut mount failure comes as the product of normal wear and tear. A vehicle’s struts, as well as the mounts to which they are affixed, are exposed to near constant movement while traversing the road. Even when at rest, a vehicle’s weight is still transferred directly to its struts and strut mounts, without any sort of reprieve.

This level of wear is only further exacerbated through continual exposure to a number of environmental stressors. Rainwater, ice, and road salt all wreak havoc upon a vehicle’s strut mounts with time, thereby expediting their eventual failure.

What Happens if a Strut Mount Completely Fails? 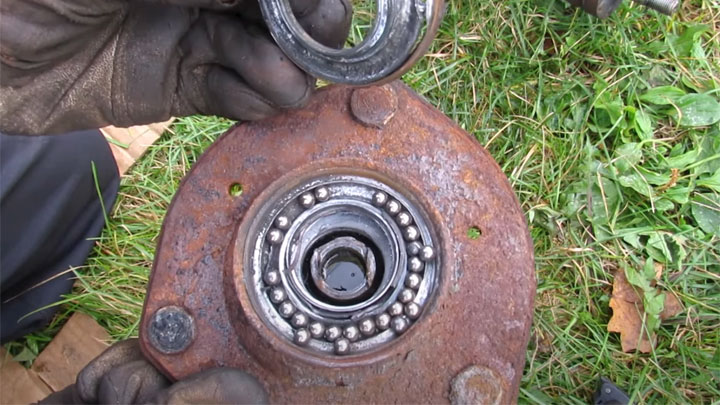 You should never, under any circumstances, knowingly drive with a damaged or otherwise compromised strut mount. If such a mount were to fail completely, a number of issues could arise.

From a mechanical standpoint, the failure of an upper strut mount would allow a strut to “clunk” around, causing detrimental effects to a vehicle’s ride quality.

Additionally, any significant free-play allotted by a failed strut mount poses a further risk of premature wear to any number of a vehicle’s steering/suspension components. This is due to the fact that each of these components will be exposed to far greater stress, at the hands of undamped shock-loading.

Furthermore, strut mount failure is a definite safety issue. When a mount of this type fails, suspension geometry can be altered, thereby leading to hazardous driving conditions. In certain cases, a vehicle’s steering/handling may be compromised.

The exact cost associated with strut mount replacement differs on a case-by-case basis and is largely dependent upon the exact make and model of the vehicle that is to receive such repairs.

However, the following is a general estimate of the costs associated with strut mount replacement, for illustrative purposes.

On average, strut mount replacement will cost between $150-$300 to complete. The lower end of this range is reflective of replacement on a standard sedan, using economy mounts. The higher of these figures is generally reserved for high-end performance vehicles or sports cars, having such repairs conducted at dealer labor rates.

Is an Alignment Necessary After Replacement?

As a general rule, one is best advised to have their vehicle’s front end aligned following strut mount replacement. This stems from the fact that struts play an integral role in the alignment of many vehicles.

Therefore, variations in the overall length of a strut assembly, due to the replacement of strut mounts, can cause issues with misalignment.

Strut length is crucial to the following alignment settings, in many vehicle models:

There are certain instances where it is not necessary to perform a front end alignment following strut mount replacement. This includes situations where a vehicle’s struts have no bearing on front end geometry, such as in the case of some wishbone suspensions.

Can a Strut Mount Be Replaced Without Removing the Strut?

In certain cases, it “might” be possible to replace a vehicle’s upper strut mount without removing the strut itself. However, doing so would likely prove just as, if not more difficult, than simply removing the strut to facilitate replacement.

One is also likely to spend far more time fidgeting with a pre-installed shock when attempting such a repair than is truly practical.

Instead, it is always best to follow the manufacturer’s service literature for your particular vehicle, when attempting strut mount replacement. Doing so ensures that such repairs are completed both safely and efficiently, without undue risk of damage to equipment or personal injury.