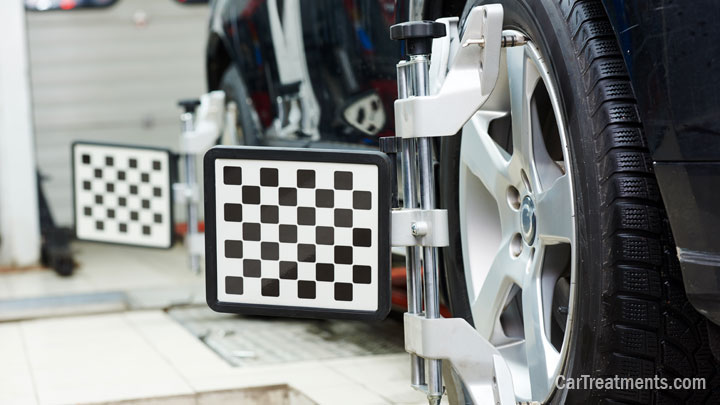 Camber refers to the angle of the wheel and tire relative to a perfectly flat road. The tops of the wheels can lean either towards or away from the center of the car when viewed from behind.

The ideal camber balances tire traction and tire wear, and thus varies for each vehicle depending on how it’s driven, road conditions, suspension type, amount of grip in the tires, and type of vehicle. Camber changes the contact patch, or area of tire contacting the ground, which affects grip.

Tires at zero camber, or neutral, have the largest contact patch and the most grip (and stability) in a straight line. Body roll changes the size of the contact patch as the car and tire lean, which reduces lateral grip the tire is able to provide.

This means that most vehicles are designed to have some camber, since having this static camber can lead to zero camber on some of the tires during turns.

See Also:  What is Caster?

Camber vs. Caster vs. Toe

The suspension of a vehicle is measured in three different ways, on different axes. Each of these affects the others, so changing one of the angles should be followed by re-measuring the others and checking the suspension components.

Caster measures the angle of the steering axis, or the position of the lower pivot point relative to the upper pivot point. This angle affects the steering ease and stability when traveling in a straight line.

Toe refers to the point of the front tires when the car is viewed from above. “Toe in” means that the leading edge of the tires are turned in towards the center of the car as if the car were “pigeon toed”.

This improves stability in a straight line when at speed. “Toe out” refers to tires that are pointed outward away from the center of the car and improves response of turning.

Camber, of course, also affects the tire wear and handling of the car. Most vehicles have slight negative camber, but some cases call for positive camber instead.

Positive camber reduces steering effort and provides greater stability in a straight line. This makes it great for off-roading or agricultural vehicles, as turning can sometimes be more difficult in these cases.

Uneven ground can normally make vehicles stray to either side (due to camber thrust) but positive camber is able to help with this issue.

Most street cars have slight negative camber on all wheels, with even more in the rear wheels to help reduce oversteer.

Performance drivers prefer negative camber on their cars for a variety of reasons outlined below. Not all effects of negative camber are good though; some, like excessive outer tire wear, are undesirable for street cars. Negative camber can cause decreased stability when driving in a straight line due to camber thrust. This occurs when negative camber wheels naturally propel the vehicle towards its midline.

If one tire loses grip the vehicle is pushed by the other tire towards the tire with the lost grip, leading to unintentional turning.

Excessive negative camber can cause the wheels to tramline, or follow cracks in the road. It also worsens acceleration and braking in a straight line. The vehicle is often too sensitive to the crown of the road (curvature designed for water drainage to the sides of the road).

Read Also: Why is Your Steering Wheel Off-Center? Performance cars need increased stability when turning, as turns are done at much higher speeds than normal. When the contact patch of the tire on the road is as large as possible during the turn, the wheels grab and hold onto the road better.

Static negative camber increases the contact patch on the outside front tire during a turn which increases grip and speed of turning.

This offsets the tendency of the outside front tire to roll onto its outer edge (positive camber) because of body roll during the turn, which would reduce grip by decreasing the contact patch size.

The inner front tire doesn’t need the contact patch to be as large as the outside front tire because the weight of the vehicle is mostly over the outer wheels during a turn, which is good since the camber becomes more negative on the inner wheel during that same turn.

In fact, NASCAR drivers always turn left (driving a counter-clockwise loop), so their cars have negative camber on the right wheels and positive camber on the left wheels. This is terrible for driving straight but perfect for their type of racing! However, performance drivers do not need to replace their performance tires as often when doing a lot of cornering since negative camber decreases the relative tire wear under these conditions. Bushings and other components of the suspension may experience increased wear with negative camber because of how forces act on these parts.

Camber is best measured by a professional with specialized equipment, such as an alignment rack. It can also be measured (albeit less accurately) with a bubble level and a camber gauge.

Before measuring, the joints in the suspension should be checked to ensure they are within spec as that can throw off the measurements. Inappropriate camber for the vehicle and its use can result in excessive tire wear, poor stability, or other handling issues.

Performance drivers adjusting camber on their vehicles often also want to know how the contact patch changes. This is measured by a pyrometer, also known as a non-contact infrared thermometer.

It’s essentially a thermometer which measures the tire temperature deep within the tread immediately after the car takes a corner. The contact patch in the turn will be hotter due to friction.

See Also:  How Much Does a Wheel Alignment Cost?

The way the camber is adjusted depends on the type of suspension. Camber plates are easily adjustable which makes them flexible for different driving conditions (i.e. driving on the highway to an autocross event, autocrossing, then driving home).

High-quality camber bolts are often used to align cars that have been bent due to a collision. Other times the length of the control arms can be adjusted to change the camber.

Since changing the camber affects the other suspension angles (toe and caster) and suspension components as well, all of these should be checked after the camber is adjusted to ensure measurements are within spec.

4 thoughts on “What is Camber? (Positive vs Negative Camber Effects)”