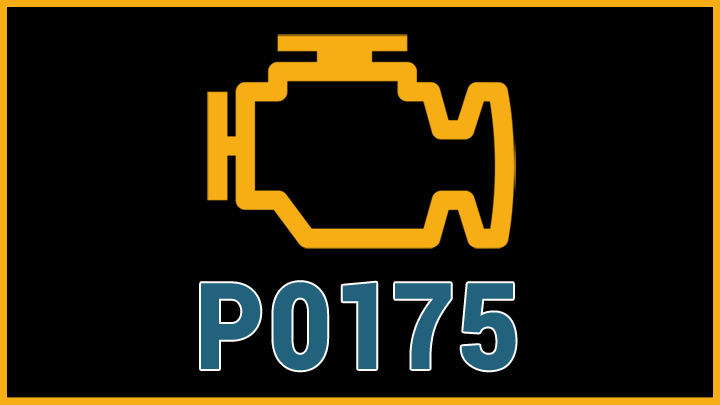 When you drive, your engine uses a combination of sensors to know exactly how much air and oxygen to release into the combustion chambers at any given time. The fuel and oxygen needs change as you speed up, rev the engine harder, or travel at higher altitudes.

As a result, the PCM sets the amount of fuel that gets released. Then, it uses the heated oxygen sensor to make small adjustments as the engine needs change with the driving speed or RPMs.

Sometimes the PCM cannot balance the fuel to oxygen ratio in the engine. There may be a leak allowing air to escape, or the fuel pump might be releasing too much gasoline. Regardless of the cause, there’s too much gas and not enough oxygen inside the motor.

When this happens, your check engine light will turn on, and your car will store a P0175 code. Scroll down to read more about code P0175, including how to diagnose the issue and fix it before further damage occurs to the vehicle.

When your vehicle displays a P0175 code, it means that the air/fuel ratio of the engine is running too rich in bank 2.

Bank 2 is the side of your engine block that does not contain your #1 cylinder. Only a V6, V8, or V10 motor will have a bank 2. The make and model of your vehicle determine whether bank 2 is on the driver or passenger side of the car.

The problems associated with a P0175 code do not make it impossible to drive. However, your vehicle will be extremely inefficient and may experience more severe issues if you leave the code untreated for a long time.

When the air-to-fuel ratio skews towards too much gasoline, you’ll drive fewer miles per gallon. You’ll have to fill up more frequently as a result of this code.

Another result of burning too much fuel is a black smoke or residue, or strong odor coming from the exhaust. There might even be soot escaping out your tailpipe.

When your engine runs rich, it can also develop other problems. There might be a misfire of one of the cylinders. You might also lack power, and your vehicle will not accelerate as quickly or easily. Sometimes, the car will have a rough idle or will stall when it’s on but not driving.

Three unique problems can contribute to a display of code P0175. Something is:

A faulty fuel injector is the most common cause of a P0175 code. As it fails, the injector will leak and push too much fuel into the engine. A leak in the fuel lines can make it appear as if the injectors are not doing their jobs.

If the fuel injectors are working and there are no leaks in the gas lines, the not enough air may be flowing into the chambers. A leak in one of the vacuum lines might allow oxygen to escape before mixing with the fuel.

As long as you rule out or repair any leaks, then the cause is likely a damaged, dirty or broken sensor. These sensors should be cleaned and tested before you jump to replace them.

Even though the error code does not directly affect the drivability of the vehicle, you should not drive your car for a long time without knowing why your engine is running rich. Many of the underlying issues that cause a P0175 code can result in costly, significant damage.

In a best-case scenario, driving with a P0175 code will burn excess gasoline, operate more inefficiently, and will waste money. Your miles per gallon will decrease, and your exhaust will smell.

Often, there is a problem with fuel or vacuum systems. These issues tend to compound and will lead to more substantial issues within the engine block.

The first step is to diagnose and fix any issues in the fuel system. You’ll want to ensure that the fuel pressure and the fuel injector pulse are normal. The fuel injectors should be functioning and not clogged. Check your fuel lines for any damages.

Then, check your vacuum lines for any leaks. Repair any problems that you discover. These leaks cause air to escape instead of entering into the engine’s combustion chambers.

Finally, check and clean all of the sensors on the bank 2 side of the engine block. Pay particular attention to any bent, corroded, or otherwise damaged connections.