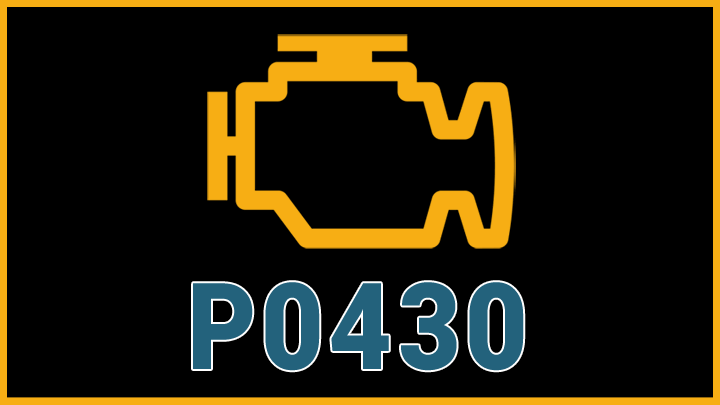 There are few things more panic-inducing than a check engine light. When you don’t know what it means, it’s easy to envision thousands of dollars in repairs and countless hours of frustration.

But the truth is that check engine lights are rarely that expensive, especially if you fix them as soon as they appear. But even after you’ve read the code, you still need to know how to fix it. So, what exactly is a code P0430, and how do you fix it?

We’ll break it all down for you so you can get your car back on the road in no time.

When it comes to OBD-II trouble code descriptions, they don’t much more cryptic than a code P0430. But when you break it all down, it’s not too complicated. Essentially a code P0430 is telling you that your catalytic converter isn’t converting enough exhaust into water – which is what it’s supposed to be doing.

If your vehicle has a code P0430, there are a few different symptoms that you might notice, but often there are few, if any, noticeable symptoms of a P0430 engine code.

It might seem redundant listing an engine code as a symptom for an engine code, but most of the time this is all you’re going to notice – at least at first. However, that doesn’t mean you should ignore the problem.

If your code P0430 is from a faulty catalytic converter, there’s a good chance your exhaust will give off a rotten egg smell. The longer you let the problem continue, the worse the smell is going to get.

Sometimes your vehicle will have a code P0430 even if the catalytic converter is working as it should. If that’s the case, there’s a good chance you’re going to notice a lack of power. If you have a code P0430 and notice a drop in power, there’s a more serious underlying condition that you need to address immediately.

There are a few potential causes of a code P0430, but by far the most common is a faulty catalytic converter. We’ve highlighted this and two other possible causes below.

It doesn’t matter if your catalytic converter is doing everything it should if there are tons of extra particulates flooding your exhaust. This can happen when your engine is misfiring, you have a blown head gasket or a litany of other damaged engine components.

But just because it’s rare doesn’t mean it’s impossible. If you’ve already ruled out the catalytic converter and internal engine damage, the oxygen sensors might be the problem.

So, while a code P0430 isn’t usually serious, you have to get an accurate diagnosis to be sure. Moreover, any time you have a check engine light, you won’t be able to tell when another problem arises.

Most of the time to fix a code P0430, you need to replace the catalytic converter. The bad news is that if you’re taking it to a dealership, you can expect to spend close to $1,800 in repairs. However, if you’re using aftermarket parts and doing it yourself, it can cost you anywhere from $500 to $1,200.

But to be sure that the catalytic converter is the problem, you’ll need to connect an OBD II diagnostic scan tool to rule out any other potential problems.