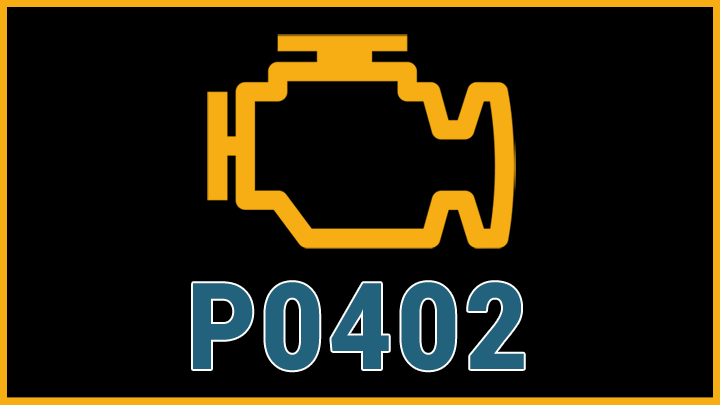 Few vehicle-related issues can be quite as maddening as the sudden illumination of a check engine light. Issues of this type arise for a number of reasons, though the vast majority relate to operational or emissions failures. In essence, the onset of a check engine light is a vehicle’s way of calling attention to an issue that is at hand.

When a check engine light appears, a vehicle’s ECM stores a corresponding DTC (diagnostic trouble code). These codes serve as general indicators of the malfunction that has been detected. DTCs are listed numerically, with the addition of an alphabetical prefix.

One such example is code P0402, which is relatively common across numerous makes and models of vehicles. In the vast majority of cases, DTC P0402 does not indicate a major mechanical or electrical failure and can be remedied in short order, if properly diagnosed.

In most cases, an afternoon of TLC is all that is needed to restore your vehicle to proper running order. Read on to learn more about trouble code P0402, and how to remedy such an issue, should it present itself.

DTC P0402 indicates that excessive or improperly timed exhaust gas flow is being allowed to recirculate into the intake manifold of the affected vehicle’s engine. As a result, the vehicle’s ECM has registered an emissions-related DTC (P0402).

To better understand the meaning behind a P0402 fault code, one must first familiarize themselves with the principles of EGR valve operation.

In the 1970s, a host of anti-smog legislation was passed into law, thereby mandating the reduction of emissions output by production vehicles. As a result, automotive manufacturers began experimenting with various means of reducing exhaust-related pollutants. One such method, which proved successful, is the idea of EGR (exhaust gas recirculation).

When a P0402 DTC has been set, a vehicle’s ECM has determined that an excessive volume of exhaust gasses have been introduced into the engine’s intake tract.

Numerous symptoms are associated with the onset of a P0402 diagnostic trouble code. However, these symptoms often vary on a case-by-case basis and might differ substantially from one make or model of vehicle to the next.

The following are the most common symptoms associated with DTC P0402. While many motorists automatically fault a vehicle’s EGR valve when a P0402 trouble code has been set, this is only one of several possibilities that exist as the potential root cause of such a DTC.

One should always conduct a thorough diagnosis of any such issue, before condemning individual components. The following are the most common causes of a P0402 fault code.

The sudden onset of a P0402 DTC is a relatively serious issue, due to potential ramifications toward vehicle drivability. In many cases, vehicle idling can be negatively impacted to the point of stalling, thereby causing unanticipated issues when coming to a stop at a traffic light or stop sign.

It is also important to understand that EGR-related issues can compound over time if left unaddressed. This is especially true if carbon fouling is to blame for your vehicle’s P0402 DTC. As time passes, this carbon fouling will continue to build, further complicating any cleaning that will eventually take place. In the vast majority of cases, remedying the root cause of a P0402 diagnostic trouble code is not as difficult as one might initially believe. However, the efficiency of this repair process hinges upon one’s ability to assess the issue at hand and make an accurate diagnosis.

The following steps will assist you in fixing the root cause of your vehicle’s P0402 trouble code.

Before beginning the diagnostic process, use a quality OBD-II scan tool to check for the presence of additional DTCs. Carefully diagnose any additional active codes, in a bid to rule out a connection with the offending P0402 DTC.

Next, you will perform a careful visual inspection of all vacuum hoses and electrical connectors which correspond to your engine’s EGR valve.

Check each attached vacuum hose for any signs of dry-rot, cracks, or obvious deterioration. Replace any such hoses that are found to be defective.

You should also inspect any wiring which connects to the engine’s EGR valve, for breaks or signs of chafing. Any damage that is found should be repaired immediately.

If a test drive confirms the reoccurrence of DTC P0402, visual inspection of the engine’s EGR valve will be necessary. In order to do so, all corresponding fasteners must be removed from the EGR valve’s mounting flange.

If heavy carbon build-up is found around the EGR valve’s plunger, such deposits can be removed with the use of a pipe cleaning brush and throttle body cleaner.

If your vehicle’s engine features a vacuum-actuated EGR, a vacuum pump can be used to test unit functionality. This pump should be plumbed to the EGR valve’s vacuum nipple, and a slight vacuum should be applied.

If the valve’s plunger does not actuate, the EGR valve is to be considered suspect.

If your vehicle features an electronically actuated EGR valve, a bi-directional scan tool can be used to validate the unit’s operation. With a scan tool of this nature hooked to the vehicle’s OBD-II data port, the EGR valve can be commanded to a set position.

If no plunger actuation is noted, an electrical circuit fault, or EGR motor fault is to blame. Further electrical testing will be necessary.

If EGR valve functional testing has revealed no issues, you should consult live streaming data from your engine’s sensors, in a bid to secure a diagnosis. Before beginning this process, reinstall your engine’s EGR valve, torqueing all previously removed hardware.

With the use of an OBD-II scan tool with live data capabilities, monitor all EGR-related temperature and pressure signals, while comparing collected data to the manufacturer specified values.

Replace any sensor that is deemed faulty during this process. If DTC P0402 persists, attention should turn to the vehicle’s ECM programming.