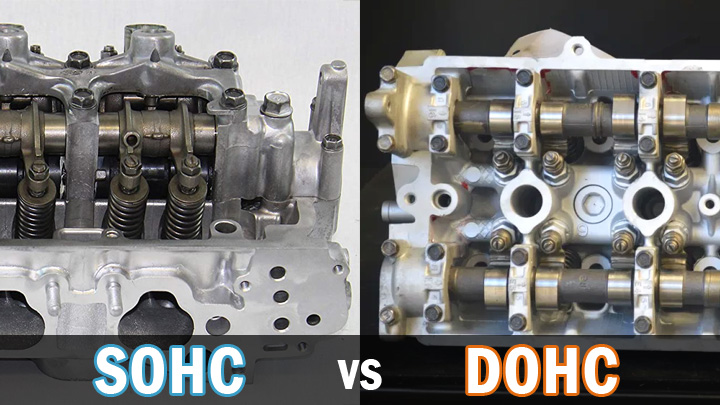 Single overhead and dual overhead camshafts have been a part of automotive, marine, motorcycle and aircraft engines since the early 20th century.

Some of the first cars with a single overhead camshaft (SOHC) were the British designed 1902 Maudsley and the American 1903 Marr Autocar.

Overhead cam engines graced a number of World War I military aircraft. Many of these engine designs used shafts to drive the cams. Today’s common timing chain driven camshafts followed in popular automobiles of the 1920s.

DOHC engines grew in popularity for many automobile makes following World War II, notably Fiat and Alfa Romeo. Today single and dual overhead cam designs proliferate in our domestic and foreign built cars. Keep reading to see how SOHC and DOHC engines compare to each other as well as the cam-in-block engine.

The Purpose of the Camshaft

These valves admit air and fuel to the combustion chambers and enable the burnt mixture to be discharged to the exhaust system.

What is a SOHC Engine?

A single overhead camshaft engine employs one camshaft located above each bank of cylinders. For a “V” design engine such as a V6 or V8, there would be two such camshafts, one above each cylinder bank. The camshaft would be driven by either a chain or a toothed timing belt.

At the choice of the engine designer, any number of methods could be used to operate the valves from this single camshaft. If, for example, all the valves were aligned parallel to the length of the cylinder head, the cam could operate all of them directly. For other valve arrangements, rocker arms or occasionally very short pushrods could be used.

The SOHC design offers several advantages over the cam-in-block design:

There are some disadvantages to the SOHC engines when compared to the cam-in-block designs as well as to the DOHC designs:

What is a DOHC Engine? A dual overhead camshaft engine will have two camshafts located above each bank of cylinders. A “V” design engine such as a V6 or V8 would have a total of four camshafts. As with the SOHC engine design, the DOHC would utilize either timing chains or a toothed belt to drive the camshafts.

In most cases with a DOHC (or twin cam) engine each cam would directly operate its associated valves.

DOHC engines share the same advantages of the SOHC designs. These include:

What is a Cam-in-Block Engine? The majority of the engines powering American cars built just after World War II were cam-in-block designs. These utilized a single camshaft located inside the engine block. This camshaft directly actuated the valves for several popular flathead engines.

For higher performance overhead valve (OHV) engines (engines with valves located above the combustion chambers), the camshaft operated each valve via a system of pushrods and levers called rocker arms.

The primary advantages of the cam-in-block valve systems are these:

Some of today’s very high performance engines remain cam-in-block designs. These designs can include a form of variable valve timing. However, cam timing variations would be simultaneous for both the intake and exhaust valves since these engines have only one camshaft.

How Can You Tell If You Have SOHC or DOHC?

In general, you can simply open the hood of your car and examine the top of the engine. A narrow but tall engine top with a distinct hump at the front for the cam drive sprocket will generally indicate that a SOHC is hidden beneath.

A wide engine and/or two-humped top will give away the presence of a DOHC setup. If in doubt, an online search for the make, model, year and engine size for your car should provide clarification in this respect.

Can You Change SOHC to DOHC?

To make such a change would, in general, be extremely costly. However, certain make and model cars have similar engine choices in both SOHC and DOHC configurations. Some Honda models fit this mold.

For specific models, an SOHC cylinder head can be swapped for a DOHC head. And with appropriate engine control unit (ECU) reprogramming and auxiliary engine systems changes (plus good DIY skills) such a transition is definitely possible..