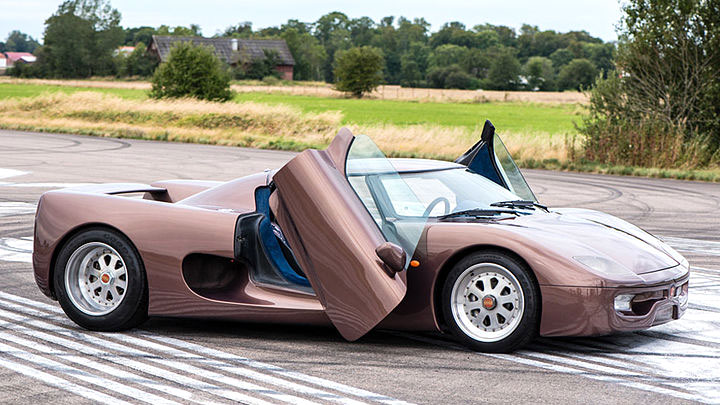 Certain inventions have become so commonplace in our daily lives that we never stop to think about how many variations there are of a simple theme. Take, for example, the humble car door.

These doors are meant to allow you to access the inside of the vehicle and provide protection from falling out when the car’s in motion. Yet there is actually a wide range of car door designs out there.

So let’s take a moment to look at 13 different types of car doors and what they’re used for.

Hinged at the top front corner of the door frame, the butterfly door is less famous than its cousin, the scissor door, but addresses some of the issues the latter presents.

Instead of opening on a strictly vertical arc, the hinge fans the door outward as well. As a result, they still require less clearance than a conventional door while providing better access to the interior than a scissor door.

While mainly found on high-performance cars, the design can be adapted to replace conventional doors, much like scissor doors. They use automatic door glides, which let the door open and close unassisted.

Unfortunately, it also shares the same drawbacks as other vertical doors when it comes to needing a higher ceiling to properly open indoors and increased difficulty escaping a flipped car.

This peculiar door was inspired by jet fighter cockpits. The windshield, side windows, and roof are integrated into one unit. Instead of regular doors, this entire canopy is attached by one of several possible hinge points, allowing it to rise vertically, to the side, or slide forward.

Besides looking cool, canopy doors can have one continuous wraparound window for unhindered visibility. Unfortunately, they act as a greenhouse and can be awkward to get in and out of. Escaping an overturned car means destroying the canopy, and there’s no way to keep the cabin dry if getting out during inclement weather.

When you think of a car door, this is most likely the kind you picture. It has hinges that connect it to the forward door frame and swings open so that the door faces the front of the car. They’re considered generally safe, as they’re less likely to open when driving at high speeds, as wind resistance tends to hold the door shut.

However, the door can become a liability if another vehicle drives too close when it’s open. If the car is oncoming, it can force the door closed, potentially injuring anyone using it. And if the car passes from behind, it can rip the door from its hinges.

One of the more recent door types, dihedral doors, are related to scissor and butterfly doors but are hinged so that they open both outwards and up at a 90-degree angle. They make it easy to get in and out but are made of expensive materials that can be damaged if they scrape a high curb.

Seen on the BMW Isetta 600, this crazy design meant the entire front of the car was on a hinge. As a result, the steering, dash, and front open out and slightly up, allowing the driver and passenger to get in through a single door.

It made it easy to get in and out without the risks other door types face but required more forward clearance when parked.

This type of door was made iconic by the DeLorean DMC-12, which was used in the Back to the Future franchise. However, they were created by none other than Jean Bugatti all the way back in 1939.

The hinges are located in the car’s roof, allowing the doors to arc out and up. This allows access with less side clearance than is needed with a conventional door.

One of the biggest design flaws inherent in gull-wing doors was finally solved with the release of the Mercedes SLS, which added explosive bolts to the hinges to allow escape if the car rolls onto its roof. The only real disadvantage is that the door design isn’t compatible with convertibles.

As a fun side note, Bugatti designed the doors based on seagulls’ wings. An inadvertent nod to this inspiration came in the 1980s cartoon M.A.S.K., where M.A.S.K. leader Matt Trakker’s Chevy Camaro Z28 was modified with gull-wing doors that extended into wings, allowing the car, codenamed Thunderhawk, to fly.

Rarely seen on cars, this type of sliding door is more commonly found on delivery vehicles such as those used by the post office and UPS. Much like the sliding doors in old houses, these doors slide into a cavity in the vehicle instead of on the outside.

One of many variations on the scissor door theme, RAPTOR (Recoil Actuated Pivoting Torsion Orbital Retractor) doors have a complex design that allows them to pull away from the car, then pivot upwards towards the front until the door is parallel to the vehicle and perpendicular to the ground.

LSD Doors is probably the biggest name in the industry when it comes to these types of conversion kits. These rare doors have a recoil actuated mechanism, making them easy to close and providing superior access to the cabin. A gas spring keeps the door open.

Unfortunately, despite three different places where the doors can be affixed to the car, they still suffer the vertical door clearance limitations in places like parking garages. Additionally, they share the dihedral door’s risk of damage from high curbs.

Made famous for its use on Lamborghini cars, this type of door was initially designed by Marcella Gandini in 1968 and used by the company Alfa Romeo. It features a hinge at the front of the door frame but uses a scissor joint at the top corner to vertically open the door 90 to 130 degrees instead of a horizontal hinge.

They’re much safer, as an open door doesn’t stick out. Drivers can park in tighter spaces and still get in or out of the car. But the main reason for scissor doors is so a driver can lean out of the moving car and better see what’s behind him if backing up. Conversion kits (like the RAPTOR door above) exist to allow cars with conventional doors to use scissor doors instead.

These doors have become extremely popular on vans and other large vehicles. The door’s mounted on a track that allows it to pop out from the vehicle and slide back along the side.

This means it doesn’t need any vertical or horizontal clearance to open, although they’re more expensive than conventional doors and have a narrower tolerance. But if you have young kids, you understand the benefits of sliding doors in a crowded parking lot.

Perhaps one of the most infamous types of car door designs, the suicide door, was avoided for decades due to its bad reputation but is once again becoming popular with some manufacturers. The term references two major design flaws.

First, the rear-facing hinge means an improperly latched door could be ripped open by wind pressure as the car’s moving. Secondly, the door shares a similar risk as conventional doors when opened into traffic.

In most cases, suicide doors are found on vehicles where the front doors are conventional, and the rear doors are suicide. However, there have been vehicles with only one set of doors that use the suicide door design.

Luxury car manufacturers have traditionally marketed suicide doors as coach or flex doors and note how easy it is to get in and out using them. However, it can sometimes get a little awkward when multiple people are getting in and out at once.

This modified version of a conventional door is popular with some of the biggest names in high-performance, such as Aston Martin and Jaguar. The hinges are fixed slightly higher on the frame and open at a slight upward angle, creating more access than a conventional door.

Unfortunately, this angle also can make it more annoying to close the door in a cramped space.

It would be a crime not to mention station wagons, which thrived in the US until the 1980s. These had a rear section, often with fold-down seats, and were commonly used as hearses and family vehicles.

Some designs opened on a vertical hinge to the side or had a split gate (tailgate with rear window opening upwards). A few could even open either outwards or down (called a dual action or triple action gate). And that’s just scratching the surface of tailgate types!