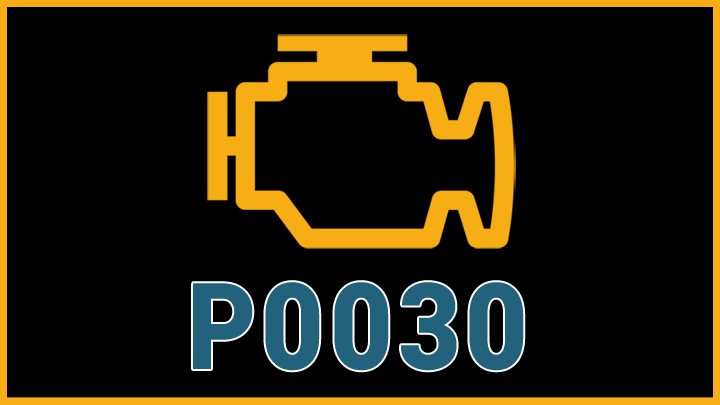 There are few things more terrifying than starting up your car only to see a check engine light staring at you. You rush your vehicle to a mechanic or a part store to figure out what the code is, only to realize that you still don’t know what the letter and number combination means.

So, what is a P0030 code, and how do you fix it? We’ll break down everything you need to know here, but you can take your heart out of your chest now. There’s a really good chance you dodged a bullet with this one.

Every oxygen sensor needs to reach a specific temperature before it can start reporting accurate readings to the PCM or ECM. To help with this, oxygen sensors have an internal heater that gets them to the right temperature as soon as possible.

The code does not tell you why this system isn’t working the way it should, only that the oxygen sensor is failing to reach the necessary temperature.

While many problems might display various symptoms to let you know what’s going on, there’s a pretty good chance that you won’t notice any symptoms outside the check engine light if you have a code P0030.

The three most common symptoms are:

It used to be that if you noticed anything past the check engine light, there was a good chance the problem wasn’t with your oxygen sensor. But in modern vehicles, that’s not always the case.

That’s because newer vehicles can use these inputs to fine-tune performance. That means you might see a drop in performance or increased fuel consumption, but neither problem should have significant results.

So, if you notice a drastic decrease in engine performance or a drastic increase in fuel consumption, there’s still a good chance the problem isn’t with the oxygen sensors. In fact, the drop in performance or uptick in fuel usage might be so minor that you don’t even notice it.

By far the most common cause of a P0030 is a faulty oxygen sensor. Oxygen sensors need to reach a specific temperature to get accurate readings, and to do this they have a heater that helps them get to the correct temperature.

But as the oxygen sensor ages, the heater can break, and that leaves you with a useless oxygen sensor. Outside of a faulty oxygen sensor, you should check the wiring around the area. If the electrical wiring sending the power to the oxygen sensor heating isn’t carrying current, obviously the sensor won’t heat up.

Finally, if both the wiring and the oxygen sensor are fine, you might be dealing with a faulty PCM. This is an extremely rare problem, but it can happen. If you have a faulty PCM, you might need to replace the entire PCM, or it might just need a software update.

As far as check engine lights go, a code P0030 is relatively benign. That’s because 95 to 99 percent of the time it’s nothing more than a faulty oxygen sensor.

However, if the problem stems from a PCM failure or a wiring issue, the problem could be more serious. Another concern that you need to watch out for is that since the check engine light is already on if a more serious problem emerges, your vehicle doesn’t have a way to let you know.

Fixing a code P0030 is usually a pretty simple and low-cost job. Typically, all you need to do to get the job done is replace the faulty oxygen sensor. And since oxygen sensors are relatively easy to replace and you can usually do the job yourself, you typically only need to buy the part.

However, keep in mind that your vehicle has at least two oxygen sensors, and vehicles with a dual exhaust system have four. You need to identify the oxygen sensor to clear the check engine light.

You can do this with an OBD-II scan tool, or you might need to take it to a mechanic to have them let you know which oxygen sensor is acting up.

A typical oxygen sensor will run anywhere from $20 to $200 depending on what you drive. If you choose to take your vehicle to a mechanic, you can expect to spend another $30 to $40 in labor (or more at a dealership), so if you’re in a hurry and don’t want to deal with it, it shouldn’t be too expensive.

If the problem isn’t with the oxygen sensor, you might need new wiring. Wiring issues can be tricky to troubleshoot, and this can drive up repair costs at the shop.

Finally, if both those systems check out, you might have a problem with the PCM. The PCM might need an update, or there might be an underlying issue. Either way, you’ll need a qualified mechanic with the appropriate equipment to diagnose and repair the problem.