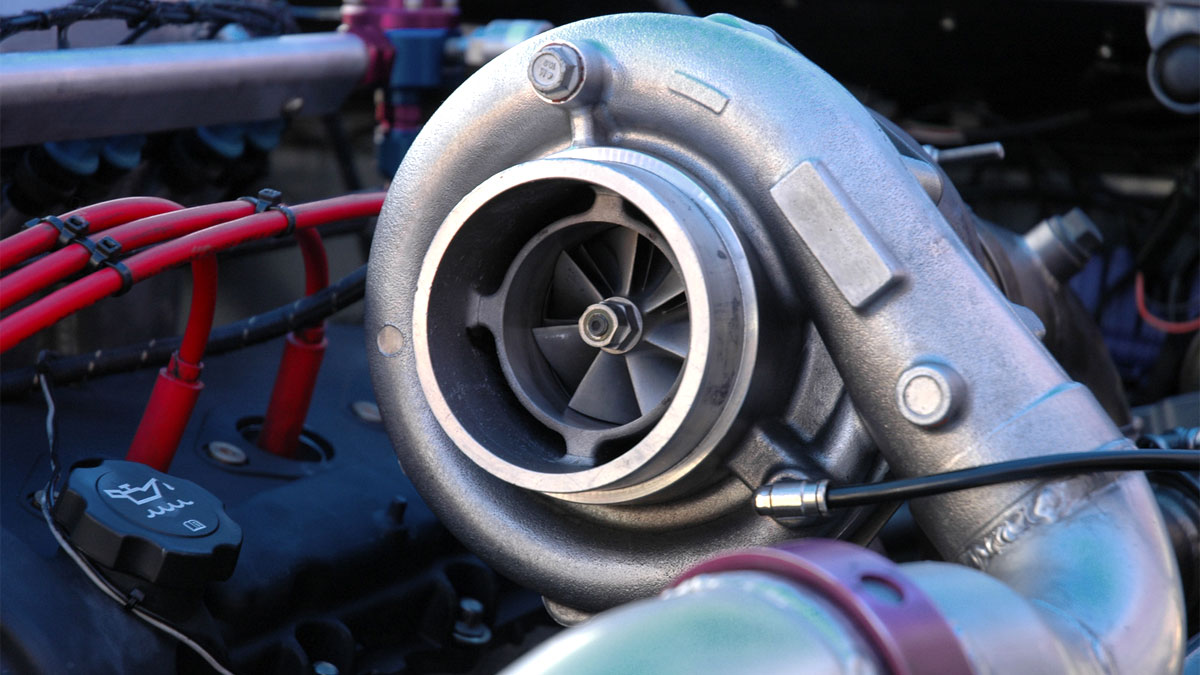 But what is a turbocharger? When was the turbocharger invented? How many types of turbochargers exist? Let’s answer these questions and more…

What is a Turbocharger?

Turbochargers are driven not by mechanical drive systems like the supercharger, but by the engine’s exhaust flow.

When engine power is demanded, engine speed increases and the increased exhaust gas flow speeds up the turbine increasing the impeller speed. This provides increased air flow to the engine enabling it to produce more power.

While a typical supercharger always runs at a speed directly related to engine RPMs (revolutions per minute), the turbocharger tends to operate at a speed related to the engine power output as demanded by the driver’s right foot.

When your car is moving on level ground at a constant speed, little boost is required. The turbocharger will become relatively passive, sort of loafing along, consuming very little energy. This enhances fuel economy.

But when you need power it comes on abundantly for accelerating up a highway ramp, for example. On a freeway trip with relatively constant cruising speeds your car will operate more economically compared to a car with a conventional supercharger.

Rudolf Diesel, developer of the diesel engine and Gottlieb Daimler were both active in early turbocharging efforts in the late 1800s. But it was Swiss engineer Alfred Buchi who, in 1905, was awarded the first turbocharger patent.

His efforts resulted in the first successful turbocharged diesel engine in 1915. But it was not until the 1950s that turbochargers were placed in use in great numbers for commercial diesel powered trucks and off road vehicles.

General Electric engineer, Sanford Moss, conducted engine testing at the top of Pikes Peak to prove the benefits of turbocharging for high altitude airplane engines. Under his guidance the first turbocharged airplane, a LaPere biplane, was tested in 1920 and ultimately exceeded an altitude of 40,000 feet.

Notable WWII military aircraft used turbochargers to enable exceptionally high altitude flights. The B-17, B-29 and P-38, for example, were turbocharged and accumulated hundreds of missions for the allied forces. The post WWII B-36 bomber also had turbocharged reciprocating engines, six of them.

In the mid 60s, turbochargers appeared for a short time on the Chevrolet Corvair and the Oldsmobile Jetfire. But these applications were not hugely successful.

In the 1970s, turbocharging emerged on several Formula 1 race cars, and BMW brought out a turbocharged street car, the 1974 2002 Turbo. Other European builders experimented with turbochargers during that era, notably Porsche and Saab.

A primary fault of turbochargers is what is referred to as turbo lag. This is caused by the inertia of the turbocharger rotating parts.

During any situation where power is demanded, this inertia will resist the acceleration of the turbine and impeller yielding a delay in the desired power increase from the engine.

This behavior is annoying and undesirable, especially in emergency situations when quick acceleration is demanded. For this single reason, many car buyers will tend to avoid purchasing a car with a turbocharger. 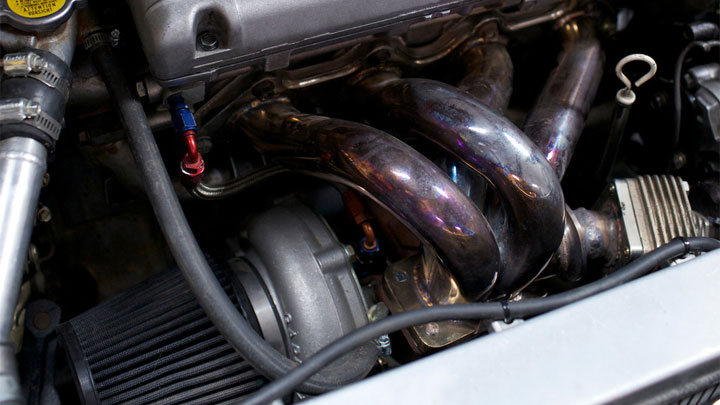 The single-turbo design is discussed above. This discussion need not be repeated except to note that among the different types, this design is the most cost effective and its size makes it easiest to configure in the limited space beneath the hood of most cars.

Many turbocharged cars today use a single turbo. And we’ve seen how one manufacturer has attacked and resolved the lag problem. Single turbo cars are available from Mazda, Toyota, BMW, Volkswagen among others.

Following the oft-abused rule, “if some is good, more is better”, twin turbos simply add a second turbo to the mix.

On V-design engines (like the V-6 and V-8), one turbo is employed for each cylinder bank. Because each turbo handles half the engine’s cylinders each can be smaller than a single turbo might be for that engine. Smaller turbos have less rotating mass and will accelerate more quickly helping to minimize turbo lag.

The design and installation of two turbos is, however, more complex than a single turbo setup. More complex piping, an additional intercooler and more complex system controls increase both weight and cost of this system versus the single turbo. Underhood, space constraints are also challenged with twin turbos.

The twin scroll turbocharger has an impeller housing with inlets for each of two paired cylinders. Each inlet and related impeller section can then be smaller than that found in a conventional single turbo.

The exhaust flow then directed to each impeller section enters at a higher speed enabling faster turbo acceleration when power is demanded. System complexity is again required to isolate and convey independent dual cylinder exhaust flows to the impeller housing.

The impeller scroll and housing design are both more complex as well. The added complexity here increases the system’s overall cost and weight. System space needs are greater as well. This type of turbo is generally limited to inline four cylinder or V-6 engines.

Increased complexity and cost for this system are two primary drawbacks, but there is only a small size and weight penalty with the VGT design.

Some Porsche models have used variable geometry turbos including the 911 Turbo as far back as 2007 and the Boxster and Cayman S models. 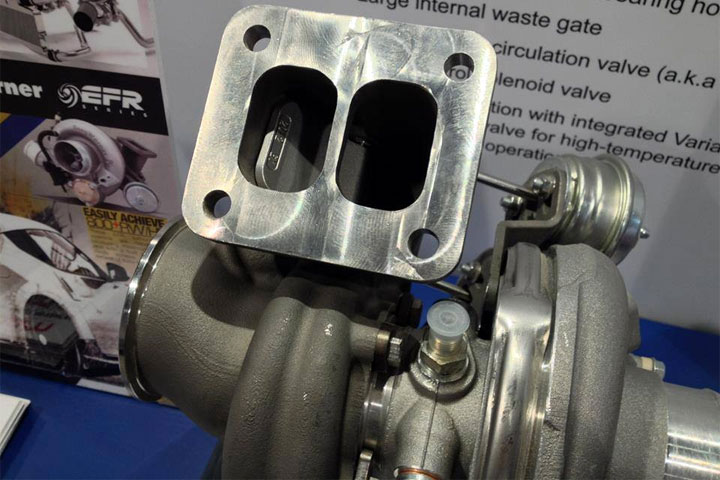 This configuration has the benefit of the twin scroll inlet but includes a different approach to variable geometry.

The variable geometry feature is located in the exhaust gas piping. The exhaust flow to each scroll is controlled by an adjustable vane. At low engine speeds, this vane directs all flow to just one of the two scroll inlet ports. This enables low flow to enter the impeller at a higher speed increasing the impeller’s speed.

Complexity, cost and weight are increased for this type of system. For this reason this level of complexity is only used in vehicles that demand a higher purchase price. 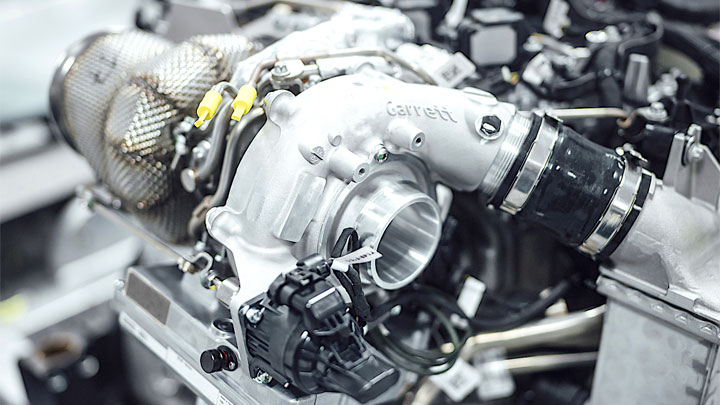 Electrically powered superchargers were discussed in the article referenced above. In the same way, an electric motor can also be applied to any of the above turbo configurations.

Controlled by the PCM, this motor operates to increase the turbo speed as necessary, adding boost when engine speed and exhaust flow are low. This effectively eliminates turbo lag.

The electric motor used for this application must be a design that can withstand the very high temperatures associated with a turbocharger. And here again, increased cost, weight and complexity are the drawbacks of this system.

The issue here is that the exhaust does not flow freely through a turbocharger system as it does in a non-turbo engine. The exhaust flow restriction greatly increases the temperature of related engine components. The development of improved valve seat materials and sodium cooled valves has largely mitigated this particular weakness in these engines.

Turbocharger durability was also limited due to deficiencies with the turbo shaft bearings. Primarily, the elevated temperatures inside a turbo caused then-available oils to form hard carbon deposits (called coking) in the turbine shaft bearings. Degraded performance due to this problem led to the need for frequent turbo removal and repair.

The development of the turbocharger encouraged the development of lubricants that could endure higher temperatures. In particular, synthetic motor oils along with today’s almost universal use of engine oil coolers have met this challenge helping to resolve turbo shaft bearing durability issues.

Incorporating direct fuel injection to automobile engines has also greatly benefitted turbo evolution. Some of today’s turbocharged automobile models are so advanced that they can operate quite well on low octane regular fuel while sacrificing only a moderate measure of torque and horsepower. Continuously variable valve timing has also added to improved performance and fuel efficiency for these engines.

Virtually every automobile manufacturer today sells one or more models of cars with one and often two turbochargers. The benefits are simple. These cars can be built with smaller displacement engines sized in the range of 1.5 to 3.0L which are lighter and more energy efficient than larger engines but equal in power due to the benefits of turbocharging.

There can be little doubt that the turbocharger is here to stay and will be seen on many more vehicle engines of the future. 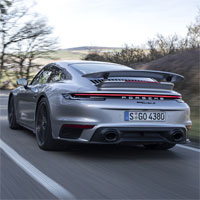 Ron Coddington
Ron is a degreed mechanical engineer. He has been a car hobbyist for over 60 years. Notable cars in his garage have included Corvairs, Alfa Romeos, Corvettes and both rotary and turbo-charged Mazdas. He brings that wealth of experience to this website to help you succeed in servicing and upgrading your favorite ride.